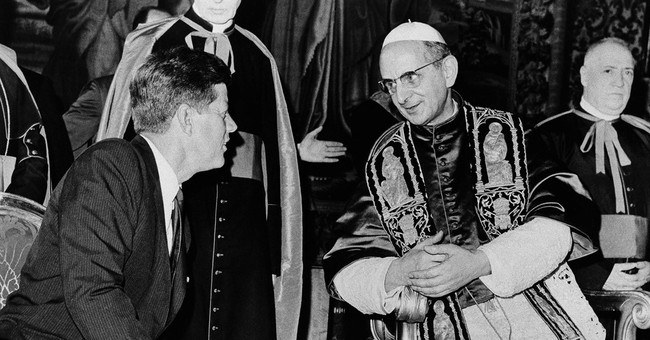 “Fairy tales can come true, it can happen to you.” (Frank Sinatra)

Fairy tales certainly came true for Sinatra’s chum John F. Kennedy. I refer to the Cuban Missile Crisis, 53 years ago this week. More specifically, I refer to the media/academia/Hollywood spin of the crisis, especially its outcome.

Surely you know the tune: “JFK stood up to the Russians in Cuba! Khrushchevblinked, cowered, and took his missiles home with his tail between his legs! Ha-ha! Take THAT Russkies! That’s the kind of gumption we need today with Iran and Putin!”

In fact, here was the consensus at the time from America’s military chiefs and most prominent Republicans:

It’s a public relations fable that Khrushchev quailed before Kennedy. The Kennedy-Khrushchev deal was a deplorable error resulting in political havoc and human suffering through the America’s.” (Gen. Alexander Haig.)

“We locked Castro’s communism into Latin America and threw away the key to its removal!” (Barry Goldwater.)

“Kennedy pulled defeat out of the jaws of victory,” (Richard Nixon.)

Alas, the astounding success of the (usual) con-job by the Democratic/Media complex is best shown by the reaction of current conservative pundits, some of whom held-up the “Pattonesque” Kennedy as a shining antithesis to the sniveling wimp George W. Bush. Let’s fast-reverse to 2006 when North Korea first startled rattling its nuclear missiles:

National Review’s Andrew McCarthy agreed with Krauthammer: "It would be better for President Bush to emulate the Kennedy strategy," writes McCarthy, a senior fellow at the Foundation for the Defense of Democracies. The U.S. message to Kim, he stresses should be no-nonsense and "Kennedy-Clear."

So let's hand it to Fidel Castro and his KGB-founded and mentored regime. Their cultivation and employment of "useful idiots" can only be described as an art. Lenin coined the term, but Castro became the virtuoso at sniffing them out, flattering them, then flummoxing them.

Not that Krauthammer and McCarthy qualify as useful idiots. Far from it. It would be hard to find other pundits as clear-headed on foreign policy issues as these. And that's precisely the impressive part. Castro and his U.S. media/ academia/Hollywood acolytes, by sheer repetition (as Joseph Goebbels famously prescribed), have planted and nurtured so many myths about the Cuban Revolution and its illustrious leader that these monopolize the discussions and literature on the subject.

The above-named conservative pundits, I'd imagine, scoff at the usual humbug regarding Cuba: the “exquisite health care and education,” the “cruelty of the U.S. embargo”…blah, blah. But they swallowed the Missile Crisis spin. The reason is not hard to find. To wit:

Imagine an Obama Presidency--but with only Chris Matthews, Chuck Todd and John Harwood “reporting” on TV and only Paul Krugman and Nicholas Kristof scribbling. No FoxNews. No Rush. No Mark Levin. No Townhall. No internet. That’s what John F. Kennedy enjoyed.

Hard as it might be for those who weren’t around at the time (or those with short memories) to imagine, only in his sweetest dreams can President Obama envision the slobbering love affair the media carried on with President Kennedy. That Khrushchev swept the floor with Kennedy during the Cuban Missile Crisis was the mainstream conservative conclusion throughout much of the Cold War.

In fact, even Democratic luminary Dean Acheson despaired: "This nation lacks leadership," he grumbled about the famous “Ex-Comm meetings” so glorified in Thirteen Days. "The meetings were repetitive and without direction. Most members of Kennedy's team had no military or diplomatic experience whatsoever. The sessions were a waste of time."

The genuine threat came --not from Moscow—but from the Castros and Che. “If the missiles had remained, we would have fired them against the very heart of the U.S., including New York. The victory of socialism is well worth millions of atomic victims.” (Che Guevara to Sam Russell of the London Daily Worker, Nov. 1962.)

It's a tribute to the power of Castroite mythology that, even with all this information a matter of public record for almost half a century the academic/media mantra (gloat, actually) still has Castro, "defying

ten U.S. Presidents!" Instead he’s been protected by them.