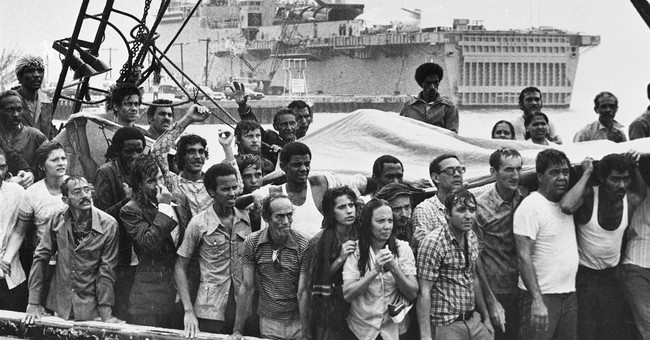 Ann Coulter is under heavy media fire for a very uncouth tweet where she implies that during the debate the Republican candidates were all pandering to Jewish-Americans. The wording of her tweet resembles the title of this article but with “Jews” in place of Cubans.

So suddenly the media has a tantrum because someone mentioned political pandering to a small but wealthy and politically powerful minority.

“Cuba Policy isn’t made in Washington. It’s made in Miami by former Batista supporters who think they can reverse history!” (CNN’s Bill Press, 2002)

"Challenge the Cuba Lobby at your peril. In Miami, conservative Cuban-Americans… silence dissent by threats and, occasionally, violence... The congressional wing of the Cuba Lobby, in concert with its friends in the executive branch, routinely punishes career civil servants who don’t toe the line.” (Dean of the American University School of Public Affairs and Council on Foreign Affairs senior William LeoGrande in Foreign Policy Magazine, April, 2013.)

“Did you have to promise your first born? (To those Cuban–Americans) snickered Hillary Clinton in a recently-exposed e-mail from 2009.

“Yes, I sold my soul to (then Florida Republican Senator with large Cuban-American constituency) George Lemieux today. I am not proud of it.” Replied Hillary’s then-Assistant Secretary for Legislative Affairs, Richard Verma.

“Does this mean you have to go to Cuba and arrest Castro or just shovel more $ into Little Havana?” Hillary Clinton snickered back.

You see: Florida Republican Senator Lemieux had blocked an ambassadorial nominee by then Sec. of State Hillary Clinton for a post in Brazil. The block was finally lifted and Hillary and Vermo were sore about the “pandering” to Cuban-Americans involved in the lift.

In fact, from the same media up in arms about Ann Coulter this week, I constantly read and hear that the Cuban-American lobby should be forthrightly called-out, sandbagged and emasculated. According to the media the recent Obama-Castro deal for a “diplomatic opening” was just such an example sandbagging and emasculation. Hence they can’t stop gloating.

Among Coulter’s biggest bashers this week we find Salon.com. They’re terribly upset that Ann Coulter has mentioned political pandering. Well, here's a Salon.com article from the 2008 campaign: “Political pandering, South Florida edition: Every four years, presidential contenders discover the special needs of South Florida's Cubans: A bipartisan, candidate-by-candidate guide to flip-flopping and talking tough about Castro.There are two things in politics…the second is that when those same candidates touch down in Florida, they will instantly become heroic warriors in the fight against Fidel Castro. More than 1 million Cuban immigrants and Cuban-Americans live in South Florida, and they wield outsize political clout in this battleground state.”

See what I mean?

Another example: During their Convention in 2004, The Democratic party feted Michael Moore as their honored guest, seating him in a place of honor right next to Jimmy Carter.

“Cuban-Americans,” wrote this honored guest for America’s majority party in his book “Downsize This,” “are responsible for sleaze and influence-peddling in American politics. In every incident of national torment that has deflated our country for the past three decades, Cuban exiles are always present and involved.”

In fact, the Republican debate was deficient in one respect. Yes, Iran, Russia, China and North Korea, all came up as potential national security threats to the U.S. But all of these nations have a bosom partner that sits on our very doorstep. Using Cuba as their bagman, both China and North Korea have been recently caught red-handed smuggling weapons to the oldest, biggest and most murderous terrorist organization in the Western hemisphere, the FARC. This was reported right here at Townhall.

Reminder: The world came closest to nuclear war because of one regime. Many of the people running Cuba in 1962 still run it today. And again, those people are close allies of every single regimementioned as a threat to America in the Republican debate.

“What?!” Khrushchev gasped on Oct. 28th 1962, as recalled by his son Sergei. “Is he (Fidel Castro) proposing that we start a nuclear war? That we launch missiles from Cuba?…But that is insane!…Remove them (our missiles) as soon as possible! Before it’s too late. Before something terrible happens!” commanded the Soviet premier.