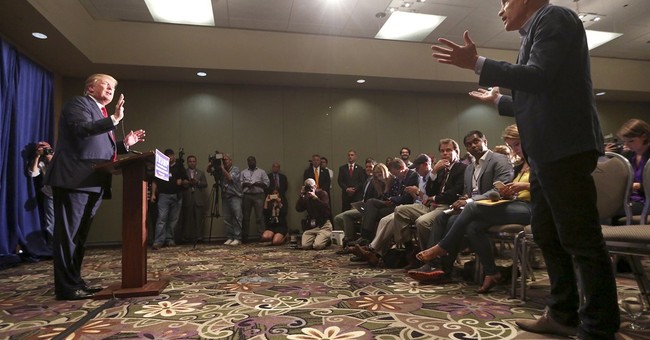 A long time ago in a place far, far away the same Univision who boasts Jorge Ramos as their “Walter Cronkite” tried blackmailing Senator Marco Rubio into an interview.

Well, during that long ago era (2011) and in that far-away place, Senator Rubio’s position regarding illegal immigrants was widely perceived as pretty close to Trump’s today. Hence the long ago and far away description—and hence the blackmail attempt by America’s top media proponent of illegal immigration.

Univision is the biggest Spanish-language network in the U.S., reaching thirteen and a half million households, (95 percent of the “Hispanic” total) making it 5th biggest in the U.S. Mexican-Americans make up most of its viewers so the network’s editorial tone essentially echoes that of the Democratic-controlled Hispanic Congressional Caucus.

Back in July 2011, Senator Rubio was asked to appear on the network’s top show, Al Punto, for an interview with Jorge Ramos, who at the time was hailed as “the Brian Williams of Hispanic TV” by AdAge. (Ha-ha! Yes--in that long ago and far away time and place being equated with Brian Williams was a compliment!)

At any rate, Jorge Ramos is a multi-Emmy winner and author of a bestseller titled “Open Borders,” which pretty much sums up his position. Marco Rubio, at the time, opposed even the Dream Act. So the plan called for “Hispanic” Univision tinkling the tune and “Hispanic” Senator Marco Rubio either stepping and fetching, tap-dancing or being outed in front of the vast majority of America’s “Hispanic” households as anything “but a credit to his race,” more like a traitor.

Senator Rubio declined the role of Mr Bo Jangles. So Univision cranked up the inducements. They had the goods on Rubio, they explained in a meeting with his staff. Marco’s brother in law had been busted for drugs in 1987 and they planned a prime-time expose of the scandal. Marco’s cooperation with an interview just might prompt Univision to “soften” or even kill the program altogether.

Marco was 16 years old at the time and this was his brother in law. If this strikes you as hardly scandalous for the freshman Senator, such was the desperation among the “Hispanic” (i.e. Democratic) establishment at the time to damage Marco Rubio that offering to silence this item struck them as an offer he couldn’t refuse. Then the Democratic-Hispanic establishment would tuck Rubio in their pocket as surely as the Corleones tucked Nevada Senator Geary in theirs.

When Marco’s sister refused Univision’s offer to “contribute” to their report, the network parked a huge news truck in front of her house, to further harass her and apparently also to further dramatize their “investigative prowess”

Univision’s “expose" on Rubio’s brother-in- law ran for two days in July 2011 and instantly fizzled, despite a publicity blizzard by Univision to their mainstream media soulmates. Apparently the tangent proved too embarrassingly tenuous even for most Rubio-bashers (of the time.)

Univision’s blackmail attempt was so widely recognized and condemned that it nixed the network’s planned hosting of the Republican debate in 2012. “Even in this time of ever-changing media techniques, Univision’s unethical tactics stand out,” wrote Rick Perry spokesman Ray Sullivan to Univision’s CEO. “Therefore, Gov. Perry will not consider participating in the Jan. 29, 2012, Univision debate until your network addresses this ethical breach and takes action to correct it.” All candidates except Ron Paul were in lockstep with Gov. Perry on the Univision boycott.

Needless to say, things have changed, to the point where Jeb Bush—widely hailed as Marco Rubio’s “mentor”-- now sides with Univision against Trump, saying : “I think people with the press (Ramos) ought to be treated with a little more respect and dignity.”

Alas, back in June of 2012, upon the release of Rubio’s book, An American Son, the Senator—and oft-mentioned Republican Vice presidential candidate of the time-- agreed to an interview with Jorge Ramos, where he uprightly denounced the blackmail attempt and harassment of his family as "a black mark in the history of the Univision Network."

This past April, Senator—and Presidential candidate—Rubio was again interviewed by Jorge Ramos in a much friendlier format.

But if the polls are any indication, it seems that this week’s “Hasta la vista, Jorge!” from Trump proved much more appealing for Republicans than Rubio’s caving.

Would Univision even consider a blackmail attempt on Donald Trump?…Many of us can already hear El Trumpo: “Go ahead, Jorge-- Make My Day!”