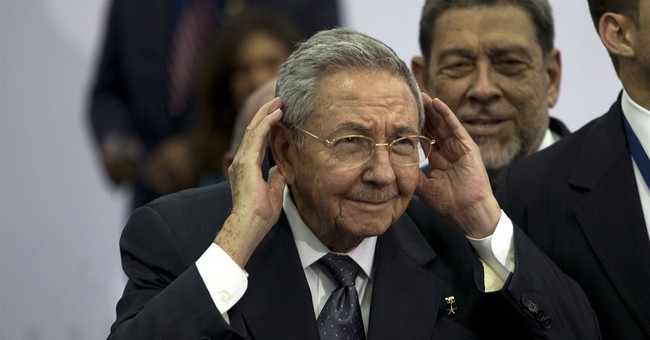 Today President Obama further opened the financial floodgates from the U.S. to the world’s most notorious deadbeat nation—who is also a “State Sponsor of Terrorism.”

Quotation marks are now required around the term “State-Sponsor of Terrorism” when referring to Cuba because just this morning, as the 45 day notification period to Congress expired, President Obama officially removed Cuba from the State Department’s list of State Sponsors of Terrorism, where President Reagan had placed it in 1982.

“Laughing all the way to the bank,” hardly does justice to what the multi-billionaire Castro family must be doing this week. The $7 billion they stole at Soviet gunpoint from U.S. businessmen in 1960 hasn’t even been mentioned by Obama’s “negotiators” as a “discussion topic” for U.S. “normalization.”

And why should they mention it? Have any of them ever run a business? Tacky notions like settling up past debts before incurring new ones doesn’t figure into the mind-set of these ultra-educated Beltway bureaucrats. That yahoo Sam Drucker mentality just isn’t for them.

Today’s further diplomatic benediction of Cuba by Obama means that the estimated $4.2 billion already flowing from the U.S. to Cuba annuallywill crank up nicely. This windfall resulted from Obama’s flurry of executive orders abolishing Presidents Reagan and Bush’s travel and remittance restrictions to Castro’s fiefdom. In brief, almost every year since Obama took office more cash has been flowing from the U.S. to Cuba than used to flow there from the Soviets at the height of their Cuba-sponsorship. Liberals and (libertarians) insist on calling such a state of financial affairs an “embargo.”

Now this removal from the terror- list will allow the Castro family to further loot international financial institutions like the World Bank and International Monetary Fund. You’re aware, I’m sure, who ultimately foots most of the bill for these international welfare agencies, badly disguised as lending institutions?

As usual with libertarians, you present a real-world fact, they counter with a chant from the sacred texts of one of their economic gurus. You present another fully-documented historical event, they repeat their holy mantra. You’re better o reasoning with a Hare-Krishna.

And speaking of terror-sponsorship. Just last week Cuba (practically) got caught red-handed supplying Chinese-made arms to the Western hemisphere’s oldest biggest and most murderous terror-group, Colombia’s FARC. The terror-death toll from these Fuerzas Armadas Revolucionarias de Colombia (FARC) exceeds 200,000, and includes more U.S. citizens than have been murdered by ISIS.

So maybe it was a mere coincidence that the very week Obama planned to remove Cuba as a terror-sponsor the mainstream media blacked-out any mention of this blatant terror-sponsorship by Cuba in our own backyard.

Back in February, you see, Colombian authorities found 99 missile heads, 100 tons of gunpowder, 2.6 million detonators, and over 3,000 artillery shells hidden under rice sacks in a ship bound from Red China to Cuba that docked in the port of Cartagena Colombia.

Most Cuba-watchers immediately guessed what was up. And just last week Colombian reporters (actually worthy of the name, unlike so many of ours) exposed the scheme. In brief:

*The arms were from a Chinese manufacturer named Norinco and the recipient was a Cuban company named Tecnoimport.

*But the ship stopped in the Colombian ports of Cartagena and Baranquilla (where the FARC is based, remember.)

* Colombia’s crackerjack newspaper El Espectator also reports that many Norinco-manufactured arms have already been captured from FARC guerrillas over the past ten years. This proliferation of Cuba-smuggled Chinese arms to the terrorist FARC got so bad that in 2007-08 The Colombian authorities even send a diplomatic protest note to the Chinese.

This awkward information at this awkward time, needless to say, might have hampered Obama’s plan to cleanse Castro from any taint of terror-sponsorship—assuming, that many people would have switched off the Kardashians to learn of it. Hence you’re only reading about it here at Townhall.

Colombia’s FARC goes so far as to thank the Cuban regime for their immense success at terror. “Thanks to Fidel Castro” boasted late FARC commander Tiro-Fijo in a 2002 interview, “we are now a powerful army, not a hit and run band.”

And oh….almost forgot. What about the Cuban people, the folks whose felicity Obama claims as the goal of his Cuban “opening?”

Well with their new Obama-issued economic lifeline gushing nicely, the Castro regime has unleashed a wave of terror on their subjects surpassing most of the terror of the past ten years, which is really saying something.

Gee, I Wonder Why Most People Are Shrugging Off Omicron?
Townhall
'Did ... did he just say this?' Joe Biden's little joke about how much time he spends with Dr. Anthony Fauci raises more than a few eyebrows [video]
Twitchy
AOC Attacks Brett Kavanaugh but Gets Laid out by Tara Reade
Redstate
40 Years Ago, Monty Python Predicted (and Mocked) Wokeness
PJ Media