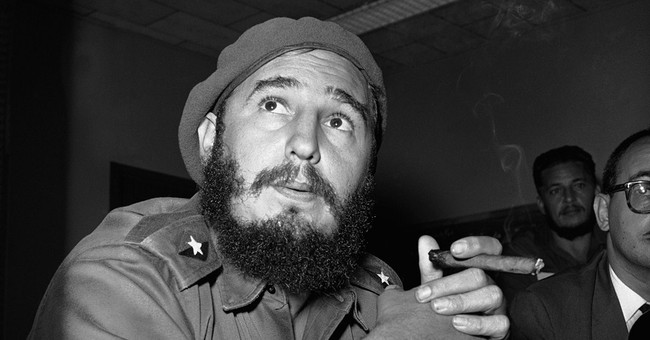 From the New York Times to Newsweek and everyone in between the mainstream media seems “horrified” and “outraged” by the video-murders so gleefully and frequently perpetrated by the Islamic terror group ISIS.

Alas, most members of the mainstream media have short—or very selective-- memories. Their darlings Fidel Castro and Che Guevara’s terror group The July 26 Movement beat ISIS to the game by 54 years. And far from expressing any “outrage” over those murders, the U.S. media of the time seemed delighted to act as a public relations adjunct to Castro’s terror-group. (Same as today, come to think of it.)

These pictures (2nd and 3rd rows) of a Cuban peasant being murdered by Castro’s terror group were published in Look Magazine in 1957. The gentleman tying on the blindfold is Raul Castro himself, whom President Obama recently felt compelled to honor with a handshake.

This knock out drag out “guerrilla war” in Cuba The New York Times, Look, Life, etc. were breathlessly reporting was (like practically everything else reported by the MSM about Cuba) a monumental hoax. Promptly upon the end of that hoax and the commencement of an even bigger one ( the conversion of Cuba from a miserable Mob-run dictatorship into Shangri-La by Castro) the terrorists started lining up war-criminals and their cameras—just like those of ISIS-- got going, as documented in these videos.

And note that ISIS also brands their murder victims as “war criminals.”

“One Thousand Killed in 5 days of Fierce Street Fighting,” had read a New York Times headline on Jan 4, 1959 about the “battle” of Santa Clara in central Cuba where Ernesto “Che” Guevara earned much of his enduring martial fame. “Commander Che Guevara appealed to Batista troops for a truce to clear the streets of casualties,” continues the NY Times article. “Guevara turned the tide in this bloody battle and whipped a Batista force of 3,000 men.”

A year later, Che’s own diaries revealed that his forces suffered exactly one casualty during this Caribbean Stalingrad, as depicted by the Times. Your humble servant here interviewed several eye-witnesses (on both sides) to this “battle” and their consensus came to about five casualties total for this Caribbean Iwo Jima.

True to New York Times- form, during this “battle,” they didn’t have a reporter within 300 miles of Santa Clara. Instead (just as today) they relied on their trusty Cuban Castroite “correspondents.”

And true to Che Guevara-form, the genuine bloodbath in Santa Clara came a week after the “battle,” when his opponents (real and imagined) were utterly defenseless. That’s when Che set his goons to dragging men and boys from their homes and set his firing squads to work in triple shifts. Nothing from the New York Times’ trusty correspondents on this, however.

The Castroite firing-squad bloodbath was just cranking up. “Certainly we execute!” boasted Che Guevara when he addressed the United Nations in December 1964. “And we will continue executing as long as it is necessary!” Those executions (murders, actually; execution implies a judicial process) had reached about 16,000 by the time of Che Guevara’s boast, the equivalent, given the relative populations, of almost a million executions in the U.S. (This figure comes from “The Black Book of Communism,” by the way, written by French scholars and published in English by Harvard University Press, neither an outpost of “right-wing Cuban exiles.”)

Among the victims of this (unreported and unlamented by the MSM bloodbath) was Carlos Machado, who was 15 years old in 1963 when the bullets from the Castroite firing squad shattered his body. His twin brother and father collapsed beside Carlos from the same volley. All had resisted Castro’s and Che’s theft of their humble family farm.

Rigoberto Hernandez was 17 when Che’s soldiers dragged him from his cell in La Cabana, jerked his head back to gag him and started dragging him to the stake. Little “Rigo” pleaded his innocence to the very bloody end. But his pleas were garbled and difficult to understand. His struggles while being gagged and bound to the stake were also awkward. The boy had been a janitor in a Havana high school and was mentally retarded. His single mother had pleaded his case with hysterical sobs. She had begged, beseeched and finally proven to his “prosecutors” that it was a case of mistaken identity. Her only son, a boy in such a condition, couldn’t possibly have been “a CIA agent planting bombs.”

“Fuego!” and the firing squad volley riddled Rigo’s little bent body as he moaned and struggled awkwardly against his bounds, blindfold and gag.

But the victims of this Stalinist bloodbath were not exclusively men and boys. In fact, the Castroites were well ahead of even the Taliban. On Christmas Eve 1961, a young Cuban woman named Juana Figueroa Diaz spat in the face of the executioners who were binding and gagging her. They’d found her guilty of feeding and hiding “bandits” (Che’s term for Cuban rednecks who took up arms to fight his theft of their land to create Stalinist kolkhozes). When the blast from that firing squad demolished her face and torso, Juana was six months pregnant.

“Foreign reporters, preferably American,” snickered Che Guevara in his diaries, “were much more valuable to us than any military victory. Much more valuable than rural recruits for our guerrilla force, were American media recruits to export our propaganda.”

“Don’t mention it!” reply these recruits. “The pleasure is all ours!” To wit:

“The Toast of Manhattan!” crowed Time magazine in January of 1996. “The Hottest Ticket in Manhattan!” also read a Newsweek story that week. Both articles referred to the social swirl and acclaim that engulfed Fidel Castro upon his visit to New York by the very Manhattan media and business luminaries who barely escaped incineration at his hand in 1962. The occasion was UN’s fiftieth anniversary celebration, but the Castromania almost recaptured the New Yorker hysteria for Simon and Garfunkel’s 1981 reunion in Central Park.

First on the Stalinist dictator’s itinerary was a luncheon at the Council on Foreign Relations. After holding court there for a rapt David Rockefeller, along with Robert McNamara, Dwayne Andreas, and Random House’s Harold Evans, Castro flashed over to Mort Zuckerman’s Fifth Avenue pad, where a throng of Beltway glitterati, including Mike Wallace, Peter Jennings, Tina Brown, Bernard Shaw, and Barbara Walters, all jostled for photo-ops and stood in line for the warmongering mass-murderer's autograph.

Diane Sawyer was so overcome in the mass-murderer’s presence that she rushed up, broke into a toothy smile, wrapped her arms around Fidel Castro, and smooched him warmly on the cheek.