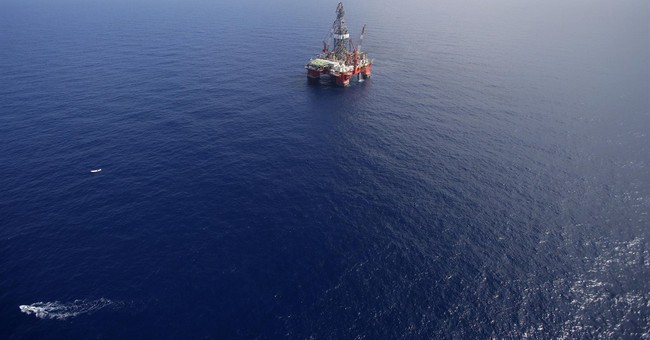 After decades of paranoid hemming and hawing, last month the U.S. Bureau of Ocean Energy Management finally approved oil exploration in Federal waters along the Atlantic coast from Delaware to Florida.

‘The announcement is the first real step toward what could be a transformation in coastal states,” says the Associated Press report, “creating thousands of jobs to support a new energy infrastructure. But it dismayed environmentalists and people who owe their livelihoods to fisheries and tourism.”

Alas, this “dismay” afflicts only the greenies from Delaware to Florida. From New Jersey up through New England the greenie hysteria against offshore oil exploration prevailed. This superstition among the local worshippers of Earth Goddess Gaia proved as intractable as the one that once mandated burning witches by New Englanders no less “enlightened.”

“With today’s decision,” whined Claire Douglass, campaign director at the environmental group Oceana, “President Obama is bowing to pressure from Big Oil rather than listening to the thousands of voices calling on him to protect our natural resources and coastal economies.”

Well, allow me to present the call of “thousands of voices” and specifically from “people who owe their livelihoods to fisheries and tourism.” Their call, based on over half a century of experience with offshore oil production (including the ultimate test: the BP Oil Spill!) says: “Drill, Baby, Drill!”

With over 3000 of the 3,700 offshore oil and gas production platforms in the Gulf of Mexico off her coast, Louisiana provides almost a third of North America's commercial fisheries. As a trivial sideline these oil production platforms also extract 80 percent of the oil and 72 percent of the natural gas produced in the Continental U.S. This “sideline” (as us fanatical fishermen see it) by itself would offset the hardships (in any rational calculation of national priorities) of the relatively few “people who owe their livelihoods to fisheries and tourism.”

But a study by LSU's sea grant college found that majority of Louisiana's offshore fishing trips (among the state’s top tourist attractions) target these structures. Recreational fishing and diving trips to these structures generate an estimated 5,560 full time jobs and $324 million annually for Louisiana.

"Oil platforms as artificial reefs support fish densities 10 to 100 times that of adjacent sand and mud bottom, and almost always exceed fish densities found at both adjacent artificial reefs of other types and natural hard bottom," says a study by Dr Bob Shipp, professor at the Marine Sciences department of the University of South Alabama in Mobile, Alabama, and currently, the vice-chair of the Gulf of Mexico Fisheries Management Council.

In fact, the most prolific and diverse marine ecosystem ever recorded by marine scientists was created by offshore oil production. Acting as artificial reefs over the past half century, the teeming fish life, coral colonies, and “bio-diversity,” created by offshore oil platforms is amply documented in several studies commissioned by none other than the U.S. Dept. of the Interior.

One recent report by the Bureau of Ocean Energy Management Minerals (a division of the U.S. Dept. of the Interior) boasts that “fish densities are 20 to 50 times higher at oil and gas platforms than in nearby Gulf water, and each platform seasonally serves as critical habitat for 10 to 20 thousand fishes.”

"Evidence indicates that massive areas of the northwestern Gulf of Mexico were essentially empty of snapper stocks for the first hundred years of the fishery,” found the study by Dr Shipp. “Subsequently, areas in the western Gulf have become the major source of red snapper, concurrent with the appearance of thousands of petroleum platforms."

More recently, the red snapper catch from the northwestern Gulf (Louisiana, studded with oil platforms) is estimated 6 to 7 times greater than the catch from the eastern Gulf (bereft of oil platforms.)" That this proliferation of seafood came because — rather than in spite — of the oil production rattled many environmental cages and provoked a legion of scoffers.

Amongst the scoffers were some The Travel Channel producers, fashionably greenish in their views. They read these claims in a book titled The Helldiver's Rodeo (and Ted Nugent's blurb sure didn't help against their scoffing!) The book described an undersea panorama that (if true) could make an interesting show for the network, they concluded, while still scoffing.

They scoffed as we rode in from the airport. They scoffed over raw oysters, grilled redfish and seafood gumbo that night. More scoffing through the Hurricanes at Pat O'Brien's. They scoffed even while suiting up in dive gear and checking the cameras as we tied up to an oil platform 20 miles in the Gulf.

But they came out of the water bug-eyed and indeed produced and broadcast a Travel Channel program showcasing a panorama that turned on its head every environmental superstition against offshore oil drilling. Schools of fish filled the water column from top to bottom — from 6-inch blennies to 12-foot sharks. Fish by the thousands. Fish by the ton.

The cameras were going crazy. Do I focus on the shoals of barracuda? Or that cloud of jacks? On the immense schools of snapper below, or on the fleet of tarpon above? How 'bout this — WHOOOAA — hammerhead!

We had some close-ups, too, of coral and sponges, the very things disappearing off Florida's (that bans offshore oil drilling) pampered reefs. Off Louisiana, they sprout in colorful profusion from the huge steel beams — acres of them. You'd never guess this was part of that unsightly structure above. The panorama of marine life around an offshore oil platform staggers anyone who puts on goggles and takes a peek, even (especially!) the most worldly scuba divers.

“Fine!” comes the greenie-weenie rebuttal. “But howze about the BP oil spill?!”

Well, after the spill, the FDA’s Gulf Coast Seafood Laboratory, the National Oceanic and Atmospheric Administration’s National Seafood Inspection Laboratory, the Louisiana Department of Wildlife and Fisheries, the Louisiana Department of Health and Hospitals, along with similar agencies from neighboring Gulf coast states, have methodically and repeatedly tested Gulf seafood for cancer-causing “polycyclic aromatic hydrocarbons.”

“Not a single sample [for oil or dispersant] has come anywhere close to levels of concern,” reported Olivia Watkins, executive media advisor for the Louisiana Department of Wildlife and Fisheries.

“All of the samples have been 100-fold or even 1,000-fold below all of these levels,” reports Bob Dickey, director of the FDA’s Gulf Coast Seafood Laboratory. “Nothing ever came close to these levels.”

“Fine!” snivel the greenie tinfoil-hatters. “But kindly define what constitutes this “level of concern.”

“The small amount of hydrocarbons in a seafood meal is much less than the exposure from pumping gas,” explained the LA Department of Health and Hospitals’ Dr. Jimmy Guidry.

“It’s all a conspiracy!” no doubt snivel the greenie tinfoil-hatters, “between Big Oil and Louisiana seafood processors and the FDA!”

The revolution is already under way – HotAir
Hotair
New Model Forecasts Date of Expected Peak in Your State, Probable Number of Deaths
Redstate