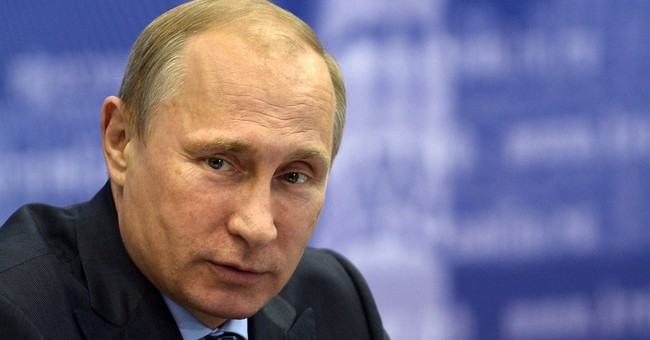 Russian president Vladimir “Teflon” Putin is on a roll—or so we’re led to believe by the media. The Russian president combines the slick machismo of James Bond, the cojones of George Patton and the craftiness of Cardinal Richelieu.

Actually, in his dealings with Cuba, Putin looks more like Barney Fife. We’re not accustomed to seeing Mr Macho-Cool Vladimir Putin made an international jackass. But many Cuba-watchers snickered as the hapless Russian President met with the Castro brothers on July 11th and “wrote off” their $32 billion debt to the Soviet Union.

“That old thing? I never liked it anyway,” Cuba-watchers easily imagine Putin hissing through gritted teeth. "We will provide support to our Cuban friends to overcome the illegal blockade of Cuba," is what Putin actually hissed for the record.

Vladimir Putin rose to the rank of Lieut. Colonel in an organization that tortured and murdered at roughly TWICE the rate of the Nazi SS. So his offense at the “illegal” U.S. embargo of a KGB-founded, terror-sponsoring regime should provoke only chortling and snorting. Instead it’s probably causing a fit of the vapors at the State Dept. and in faculty lounges nationwide.

Not that Putin left Cuba completely empty-handed. Instead the Russians reclaimed the Evil Empire’s largest foreign spying base, located in Lourdes just south of Havana. The Soviets built this complex-- capable of electronic spying on everything from the U.S. Military’s Central and Southern command to NASA facilities-- in 1967 and manned it until 2001. That year financial problems and pressure from the U.S. forced the Russians to close and abandon it. Interestingly it was (then) Russian President Vladimir Putin who felt compelled to lock it up and scurry out.

This re-colonization by the Russians of a spy base on our very borders is obviously important, but surely a true Russian Richelieu could have reclaimed the base for less than $32 billion, especially with an Obama in the White House.

Putin’s visit to the colonial outpost his “old” outfit (the KGB) helped convert from a vibrant capitalist nation swamped with European immigrants into a vast sewer, slum and prison that repels even impoverished Haitians disgusted most Cuban dissidents. The loathing of most Cubans (including many communists) for Che Guevara owed much to Guevara's groupie-like devotion to the Soviets who infested Cuba and roundly repelled almost all Cubans.

Putin’s fleecing by the Castro brothers provides more proof (if we actually needed any) that rarely in modern history has any item of U.S. foreign policy triumphed as patently (or hilariously) as the so-called U.S. embargo of Castro’s Stalinist kleptocracy. Here’s a glittering gem amidst the rubble of so much recent U.S. foreign policy.

In 2011 the Castros stuck it even to their old “friends” Nelson Mandela’s South Africa. “The Cuban regime has a long track record of failing to pay back our loans,” lamented South Africa’s Deputy Minister of Trade & Industry as he wrote off almost 2 billion Rand in Cuban debt.

In sharp contrast, thanks to the so-called U.S. embargo of Cuba, the U.S. taxpayer remains unfleeced (at least at the hands of the Castros,) even after almost $4 billion in trade over the past dozen years with Cuba, the world’s most notorious deadbeat. “Wanna trade?” says the current version of the U.S. embargo. “No problemo, Mr Castro. Cash up front, buddy. The American taxpayer will NOT extend you credit. Comprende?

Enacted by the Bush team in 2001 this cash-up-front policy has kept the U.S. taxpayer snickering on the sidelines, much as we snickered at Oliver Douglas dealings with Mr Haney or Steven Spielberg and Larry King’s with Bernie Madoff.

“The problem with Socialism,” famously quipped Margaret Thatcher, “is that you eventually run out of other peoples’ money.” True enough. But when the communist Castros run out of one sugar-daddy’s money, there’s always another suitor waiting in line. From the Soviets to the Europeans to the Mexicans to the Venezuelans, etc. the Castro brothers—unlike, say, Bernie Madoff—possess a singular talent for keeping their scam running longer than the Energizer Bunny. One born every minute, Mr P.T. Barnum? Ask the Castro brothers. They’ll tell you that ten are born every second.

Alas, an extremely well-funded campaign to include us among P.T Barnum’s cherished customers (i.e. lift the Cuba embargo) is building steam in Washington. Fascinatingly, “libertarians”-- those self-described defenders of the U.S. taxpayer, those self-described champions of American sovereignty and pocket books against snooty, sneaky and predatory supranational cabals and elites—these very libertarians now serve as an echo-chamber for David Rockefeller’s Council on Foreign Relations and George Soros’ Open Society Foundation, along with The Trilateral Commission , the Davos Groups, the United Nations, The Arca Foundation, former Fed Chairman Paul Volcker, The Ford Foundation, a KGB Lieut Colonel, The Brookings Institute, and the Carnegie Endowment for International Piece (founded by Soviet spy Alger Hiss.)

Today’s “libertarians” march arm in arm chanting the anti-Cuba embargo mantra in perfect rhyme and cadence with every socialist elitist and every secretive supranational outfit mentioned above. Bedfellows don’t get much stranger. Let’s stand back and have a look:

All of the above clamor for an Imperial Democratic President to further circumvent the U.S. Congress and nullify the work of legendary conservative Republican legislators Dan Burton of Indiana and Jesse Helms of North Carolina.

Another name for the Cuba embargo in its current form, after all, is the Helms-Burton act of 1996, sponsored by these Red-State Republicans and constitutionally voted upon and passed by U.S. legislative branch.

But today’s “libertarian constitutionalists” have signed on to one of David Rockefeller’s longest-running and most cherished labors of love. All the above clamor for a brazenly imperial President and disciple of Saul Alinsky to further trash the congressional work of Jesse Helms and Dan Burton (also a Tea Party stalwart until his recent retirement.) This trashing would enable U.S. taxpayers to subsidize the Communist terror-sponsoring regime that stole $7 billion from U.S. stockholders at Soviet gunpoint and came within a hair of nuking us. This nuking was barely foiled at the last second by the aghast Butcher of Budapest:

“What?!” Khrushchev gasped on Oct. 28th 1962, as recalled by his son Sergei. “Is he (Fidel Castro) proposing that we launch missiles from Cuba?....But that is insane!...Remove them (our missiles) as soon as possible! Before it’s too late. Before something terrible happens!”

Oh, I know…I know, Camelot’s court scribes concocted a different version of why the Russian missiles left Cuba. And naturally this version went instantly viral in the MSM, Academia and Hollywood.

At any rate, too bad Rod Serling isn’t around. This freak- show of anti-“embargo” lobbying would make a great episode for The Twilight Zone.