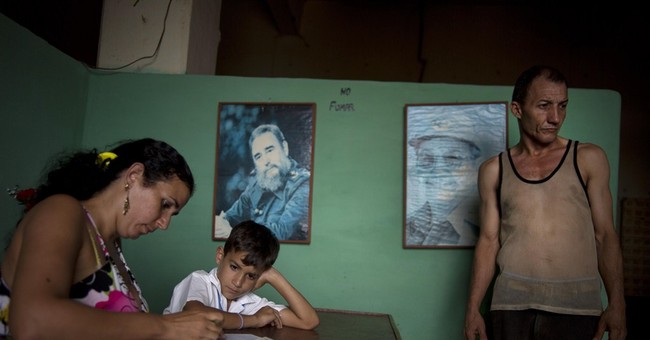 No ethnic group in the U.S. matches Cuban-Americans in their rejection of the Democratic Party. This might explain why most of you, amigos, have probably never heard of this atrocity against “Hispanics” attempting to enter the U.S. The Democratic Party’s public relations department (i.e. mainstream media) saw no upside to publicizing this “border crisis.” But this week marks the 20th anniversary of the Communist massacre.

“In the summer of 1994, something terrible happened out there,” ABC’s Ted Koppel was reporting from Havana in 1998 as he pointed towards the Florida straits. “It was an incident that went all but unnoticed in the US media. The Cuban-American community protested but they protest a lot and as I say, we in the mainstream media all but ignored it. Now we welcome Cuban-American author Humberto Fontova for more details.”

“Thanks Ted! I’ll take it from here.” (Actually I’m making up the part about appearing on ABC. Actually Fox News is among the few who will tolerate me. But thanks to Ted anyway for notifying the world of this Castroite atrocity, even if four years later.)

In the predawn darkness of July 13, 1994, 72 desperate Cubans - old and young, male and female - sneaked aboard a decrepit but seaworthy tugboat in Havana harbor and set off for the U.S. and the prospect of freedom.

The people boarding that tug knew better. And for a simple reason: the cruel hand of fate had slated them to live under Fidel Castro and Che Guevara’s handiwork.

The lumbering craft cleared the harbor and five foot waves started buffeting the tug. The men sprung to action as the impromptu crew while mothers, sisters and aunts hushed the terrified children, some as young as one. Turning back was out of the question.

A few miles into the turbulent sea, 30-year-old Maria Garcia felt someone tugging her sleeve. She looked down and it was her 10-year-old son, Juan. "Mami, look!" and he pointed behind them toward shore. "What's those lights?"

"Looks like a boat following us, son," she stuttered while stroking his hair. "Calm down, mi hijo (my son). Try to sleep. When you wake up, we'll be with our cousins in a free country. Don't worry." In fact, Maria suspected the lights belonged to Castro patrol boats coming out to intercept them.

In seconds the patrol boats were alongside the tug and - WHACK!! - with its steel prow, the closest patrol boat rammed the back of the tug. People were knocked around the deck like bowling pins. But it looked like an accident, right? Rough seas and all. Could happen to anyone, right?

"Hey, WATCH IT!" a man yelled as he rubbed the lump on his forehead. "We have women and children aboard!" Women held up their squalling children to get the point across. If they'd only known.

This gave the gallant Castroites nice targets for their water cannon. WHOOSH! The water cannon was zeroed and the trigger yanked. The water blast shot into the tug, swept the deck and mowed the escapees down, slamming some against bulkheads, blowing others off the deck into the five-foot waves.

"MI HIJO! MI HIJO!" Maria screamed as the water jet slammed into her, ripping half the clothes off her body and ripping Juan's arm from her grasp. "JUANITO! JUANITO!" She fumbled frantically around her, still blinded by the water blast. Juan had gone spinning across the deck and now clung desperately to the tug's railing 10 feet behind Maria as huge waves lapped his legs.

WHACK! Another of the steel patrol boats turned sharply and rammed the tug from the other side. Then - CRACK! another from the front! WHACK! The one from behind slammed them again. The tug was surrounded. It was obvious now: The ramming was NO accident. And in Cuba you don't do something like this without strict orders from WAY above.

"We have women and children aboard!" The men yelled. "We'll turn around! OK?!"

WHACK! the Castroites answered the plea by ramming them again. And this time the blow from the steel prow was followed by a sharp snapping sound from the wooden tug. In seconds the tug started coming apart and sinking. Muffled yells and cries came from below. Turns out the women and children who had scrambled into the hold for safety after the first whack had in fact scrambled into a watery tomb.

With the boat coming apart and the water rushing in around them, some got death grips on their children and managed to scramble or swim out. But not all. The roar from the water cannons and the din from the boat engines muffled most of the screams, but all around people were screaming, coughing, gagging and sinking.

Fortunately, a Greek freighter bound for Havana had happened upon the scene of slaughter and sped to the rescue. NOW one of the Castro boats threw out some life preservers on ropes and started hauling people in, pretending they'd been doing it all along.

Maria Garcia lost her son, Juanito, her husband, brother, sister, two uncles and three cousins in the maritime massacre. In all, 37 people drowned, 11 of them children. Carlos Anaya was 3 when he drowned, Yisel Alvarez 4. Helen Martinez was 6 months old.

And all this death and horror to flee from a nation that experienced net immigration throughout the 20th Century, where boats and planes brought in many more people than they took out - except on vacation. (Despite what you saw in The Godfather, actually, in 1953, more Cubans vacationed in the U.S. than Americans in Cuba. And they all happily returned home with nary an escort from the U.S. Border Patrol, as befit a nation with a larger middle class than much of Europe.)

Thirty one people were finally plucked from the seas and hauled back to Cuba where all were jailed or put under house arrest. They hadn't been through enough, you see. But a few later escaped Cuba on rafts and reached Miami. Hence we have Maria Garcia's gut-wrenching testimony presented to the UN, the OAS and Amnesty International, who all filed "complaints," reports, "protests.”(with the customary results.)

This was obviously a rogue operation by crazed deviants, you say. No government could possibly condone, much less directly order such a thing! Right?

Wrong. Nothing is random in Stalinist Cuba. One of the gallant water-cannon gunners was even decorated (personally) by Fidel Castro. Perhaps for expert marksmanship. A three-year old child presents a pretty small target. A six-month old baby an even smaller one. Magnificent job bravely defending our glorious revolution, companero!

“Castro has brought very high literacy and great health-care to his country. His personal magnetism is powerful, His presence is commanding!” (Barbara Walters.)