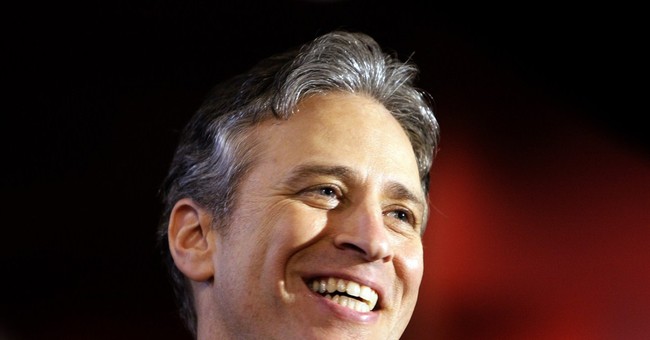 Jon Stewart’s snark-fest against Fox News this week over Benghazi finally prompted a rebuttal (of sorts) from Greta Van Susteren: “Note to Jon Stewart (who I think is smart and clever …but like the rest of us, not always right…but a comedian has, of course, way more latitude – we in the media should get it right.)”

This “latitude,” however, should not allow Jon Stewart to disseminate propaganda from Castro’s KGB-founded and mentored intelligence services uncontested. “I LOVE this book!” Jon Stewart gushed upon greeting author TJ English who a few years ago was publicizing his book titled "How the Mob Owned Cuba, and Lost it to the Revolution," on The Daily Show.

“This is the TRUE story of Cuba!” continued the Peabody award winner (for meritorious public service) barely containing himself. “A fascinating book!” hailed Stewart.

Unknown to “The Smartest guy in the Comedy Central Room” Stewart, the primary source for English’s book-- cited no fewer than 72 times in quotes and footnotes-- is an intelligence apparatchik of Castro’s totalitarian regime named Enrique Cirules.

In fact, Senor Cirules is an official of Cuba’s “La Casa de las Americas” agency that publishes and promotes the Castro regime’s propaganda in books and articles under the guise of “art.” In 1983 a high ranking Cuban Intelligence officer named Jesus Perez Mendez defected to the U.S. and spilled his guts to the FBI. Among his spillings we encounter the following: "The Cuban DGI (Directorio General de Inteligencia, Castro's KGB-trained Secret service) controls Casa de las Americas.”

“We were hoping to have Senor Perez-Mendes on tonight to contribute his views on the veracity of your book’s claims, Mr English,” would have been a properly snarky Stewart introduction to English. “But were thwarted upon discovering that he lives under FBI protection for fear of being assassinated by the KGB-trained folks who hosted you in Cuba and collaborated with you in writing the book!”

“Mr English, in your book’s acknowledgements you describe this Castroite apparatchik Enrique Cirules as a “Cuban author," the properly snarky and Peabody-winning Stewart might have continued. “Wouldn’t this be like describing Julius Streicher as “a German author," and Ilya Ehrenburg as "a Russian author?"

Instead, minutes into the interview and in response to another Godfather-ite cliché by the smug TJ English, Stewart-- this winner of the Television Critics Association award for “Outstanding Achievement in News and Information,"-- gushed: "WOW! So the Mob actually built Cuba's economy! So it was actually worse than shown in Godfather II!"

I know, I know, the “the Mob ran pre-Castro Cuba” meme is so entrenched into the worldwide media/Hollywood/academia Cuba narrative that perhaps we shouldn’t single out Jon Stewart as a Castro dupe when so many other Castro dupes parrot the same propaganda every time Cuba hits the news cycle. Take a Boston Globe editorial just this week:

“Cubans… are also aware that the United States doesn’t have clean hands in Cuba. Under the thuggish reign of US-backed Fulgencio Batista, American sugar plantations exploited laborers and stoked racial anger through segregation; the US mafia, having been dislodged from American cities by the crusading Kefauver committee, took over much of Havana, operating gambling rackets, drug rings, and prostitution.”

In 1955 Cuba contained a grand total of three gambling casinos, the biggest was at the Tropicana and featured ten gambling tables and thirty slot machines, the Hotel Nacional, featured seven roulette wheels and twenty-one slot machines. “By contrast, in 1955 the single Riviera Casino in Las Vegas featured twenty tables and one hundred and sixteen slot machines. This means that in 1955: one Las Vegas Casino had more gambling action than all of Cuba.

Also interesting: according to the Las Vegas Convention and Visitor Commission the typical tourist spends five days in their city and spends an average of $580 ($75 in 1957 dollars) on gambling, the main motive for 90 per cent of visitors. Well, throughout the 1950's Cuba averaged 180,000 tourists a year.Let's assume ALL those tourists —men, women, adolescents, children—did nothing in Cuba but gamble, and at the Las Vegas' rate.Well, this would mean an extremely generous total of $13 and a half million for Cuba's gambling industry annually. But in 1957 Cuba's Gross Domestic product was $2.7 billion, and Cuba's foreign receipts were $752 million. How could the beneficiaries of that miniscule fraction of Cuba's income “take over” one of the wealthiest, most modern and economically diverse cities in the Western hemisphere?

Here’s another snark-opportunity for Jon Stewart’s writers in case they again host T.J. English: “Mr English, your book claims that: "Every Monday at noon, a bagman for mobster Meyer Lansky delivered a satchel filled with $1.28 million in cash that was to be delivered to Batista.”

“So Mr English, are you claiming that Mob chief Meyer Lansky was slipping Batista MORE every week than the COMBINED annual GROSS from EVERY casino in Cuba, including those unaffiliated with Meyer Lansky?”

Also interesting: In 1953 more Cubans vacationed in the U.S. than Americans vacationed in Cuba. How could the wretched and brutalized residents of that plundered and impoverished nation, (as the Boston Globe, New York Times, Hollywood, NPR, Jon Stewart, etc. depict it) have possibly pulled that off?

“But wait-a-minute Humberto?!” you say. “The media, Hollywood and our professors all swear up and down that Batista was backed by the U.S., who bitterly and violently opposed Castro?!”

Well, here’s the U.S. ambassador to Cuba from 1957-59 Earl T. Smith testifying to the U.S. Senate in 1960: “various agencies of the United States directly and indirectly brought Fidel Castro into power.”

And here’s the CIA’s Caribbean desk chief from 1957-60 Robert Reynolds, another knowledgeable party to the issue, you might think: “Me and my staff were all Fidelistas.”

In fact, during that horrible period for Cubans ( as depicted by Godfather II and Jon Stewart) not only did most Cubans voluntarily remain in Cuba despite open doors both from Cuba and into the U.S.—but the island’s standard of living and booming and diverse economy attracted immigrants from both Europe and the U.S.

During this period people (from nearby Haiti and Jamaica) often jumped on rafts trying to enter Cuba.

All “heresies” above fully-documented here.