Where Have all the Flower (Children) Gone? 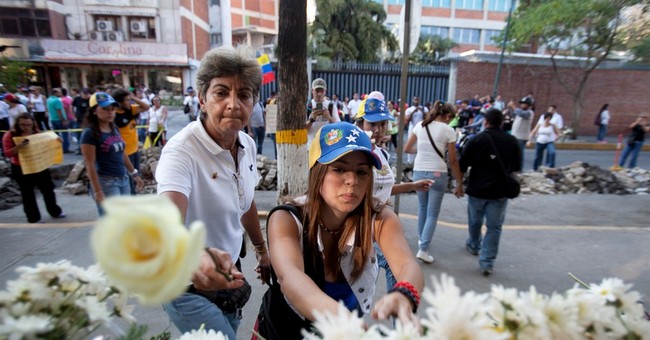 That silence you hear issues from the media/celebrity axis regarding the massive protests in Venezuela where hip college kids are being beaten, tear-gassed and shot down in a manner to shame anything done by Mayor Daley’s police in 1968 or the Ohio National Guard in 1970. Six Venezuelan youths are confirmed dead and hundreds have been injured and/or arrested.

Forget looking in the mainstream media for the nitty-gritty of this communist repression. The Venezuelan regime —under the (literal!) and expert tutelage of their Cuban colonial overlords--is easily censoring the sheeplike mainstream media. The truth is getting out through social media. Please don’t miss these dramatic videos.

But these are Communist police and National Guardsmen doing the beating, gassing and shooting, you see. Hence the silence. Worse still, these Venezuelan storm-troopers are “practiced at the art of repression” thanks to hands-on training by the best in the business: Castro’s police.

There is no place in the media-celebrity narrative on Latin American police repression for this sort of thing. Pinochet? Somoza? Batista?—sure! These Latin American dictators thrived on repressing young hipsters. But they were all “right-wingers.” So it was only natural. A good word regarding any of those regimes by a rocker celebrity would have lead to instant and permanent blacklisting.

On the other hand, a good word regarding the Castro regime serves almost as password into the uppermost reaches of celebrity-rocker status, especially it’s “thinking” echelons (as such things are measured among rockers.)

The notion of Castro’s Cuba as stiflingly Stalinist nation never quite caught on among ‘the enlightened.” Instead the island often inspires hazy visions of a vast commune, rock-fest or Occupy site, studded with free health clinics and with Wavy Gravy handing out love-beads at the entrance. The regime was founded by beatniks, after all. In 1960 Jean Paul Sartre hailed Cuba’s Stalinist rulers as “les Enfants au Pouvoir” (the children in power). A few months earlier Fidel Castro spoke at Harvard the same bill as beat poet Allen Ginsberg. And ever since then, long-haired Che Guevara has reigned worldwide as top icon of youthful rebellion.

“They saw in him (Fidel Castro,)” writes Camelot court scribe Arthur Schlesinger Jr. “the hipster who in the era of the Organization Man had joyfully defied the system.”

In fact the brain-shackled robot Fidel Castro and Che Guevara tried to create with their firing squads, forced labor camps and Stalinist indoctrination makes the Eisenhower era’s “Organization Man” look like a combination of Jimmy Hendrix and Jack Kerouac.

As exhibit A. in this grotesque ideological disconnect let’s take the famous rockers and “political thinkers” responsible for the songs “Four Dead in Ohio” and “Chicago.”

In 1979 when Fidel Castro (whose regime murdered more political prisoners than pre-war Hitler's and jailed political prisoners at a higher rate than Stalin's) invited Stephen Stills to perform in Cuba at a Communist propaganda-palooza known as “Havana-Jam,” the famous Woodstocker could hardly contain his elation. The fervent champion of human-rights, civil rights and free-speech (indeed Crosby, Stills, Nash and Young’s last tour was titled “The Free-Speech Tour”) not only took up the offer to perform at this “Havana-Jam,” but also composed a song in Castro’s honor, titled “Cuba al Fin!” (Cuba at Last!)

Jazz-master and Cuban exile Paquito‘d Rivera, living in Cuba at the time, recalls watching Stephen Stills on stage at Havana’s Karl Marx theatre lovingly crooning his songs to the families of Cuba’s Stalinist nomenklatura as if Havana-Jam were a personal performance for the mass-murderer - in-chief himself. Within blocks of this cheeky “Havana-Jam,” (which also included Human-Rights activist Kris Kristofferson along with Billy Joel) Cuban youths, black and white, languished in dungeons suffering longer prison sentences than Nelson Mandela’s. The Cubans’ crimes were attempting free speech.

“They (Castro’s Stalinist regime) invited me because they knew I was politically astute,” gloated Stephen Stills regarding the acumen and good taste of his Cuban hosts, who to this day jail and torture youths for the crime of saying “Down with Fidel!”

“There’s a man with a gun over there, ’tellin me I gotta beware,” wrote Stepen Stills in the 1967 hit For What it’s Worth.” Indeed, Stephen Stills: Cuban youths have much to teach regarding that scenario. If only you’d deigned to part briefly from your Stalinist hosts (the gunmen) in Havana and asked around.

“Paranoia strikes deep, into your life it will creep. It starts when you're always afraid, you step out of line, the man come and take you away.” The “man who came to take away” Cubans at a higher rate than Russians were taken away by Stalin and Germans were taken away by Hitler was your very host on your Cuban visit, Stephen Stills.

“Young people speaking their minds—a getting SO much resistance from behind..”

“Exactly Stephen Stills, from the people right behind your stage, from the Stalinists who were sponsoring you, who you were brownnosing with you, who were jailing and torturing us, for the crime of listening to YOUR music!” Might reply many Cuban youths of the time.

“You have to give them (Cuba’s Stalinists) due respect because they have a unique form of socialism that’s very significant in the scheme of world history,” Stephen Stills gloated while explaining his Cuba visit.