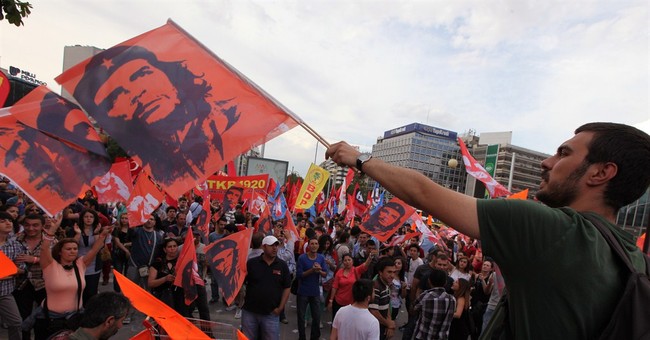 “Youth must refrain from ungrateful questioning of governmental mandates!” snarled the KGB-mentored Che Guevara in 1961. “Instead they must dedicate themselves to study, work and military service! Youth should learn to think and act as a mass. It is criminal to think of individuals! Individualism must disappear from Cuba!”

By the mid-'60s, the crime of a "rocker" lifestyle (blue jeans, long hair, fondness for the Beatles and Stones) or effeminate behavior got thousands of youths yanked out of Cuba's streets and parks by Che’s KGB-trained secret police and dumped in prison camps with "Work Will Make Men Out of You" emblazoned in bold letters above the gate and with machine-gunners posted on the watchtowers. The initials for these camps were UMAP, not GULAG, but the conditions were quite similar.

Today, the world's largest image of the man whom so many college hipsters sport on their shirts adorns Cuba's headquarters and torture chambers for its KGB-trained secret police. Nothing could be more fitting.

The most popular version of the Che T-shirt, for instance, sports the slogan "fight oppression" under his famous countenance. This is the face of the second-in-command, chief executioner, and chief KGB liaison for a regime that jailed political prisoners at a higher rate than Stalin's and murdered more people in its first five years in power than Hitler's murdered in its first six.

Forty-six years ago today, Ernesto “Che” Guevara got a major dose of his own medicine. Without trial he was declared a murderer, stood against a wall and shot. If the saying “What goes around comes around” ever fit, it’s here.

“When you saw the beaming look on Che’s face as his victims were tied to the stake and blasted apart by the firing squad,” said a former Cuban political prisoner, to this writer, “you saw there was something seriously, seriously wrong with Che Guevara.”

As commander of the La Cabana execution yard, Che often shattered the skull of the condemned man (or boy) by firing the coup de grace himself. When other duties tore him away from his beloved execution yard, he consoled himself by viewing the slaughter. Che’s second-story office in La Cabana had a section of wall torn out so he could watch his darling firing-squads at work.

Even as a youth, Ernesto Guevara’s writings revealed a serious mental illness. “My nostrils dilate while savoring the acrid odor of gunpowder and blood. Crazy with fury I will stain my rifle red while slaughtering any vencido that falls in my hands! With the deaths of my enemies I prepare my being for the sacred fight and join the triumphant proletariat with a bestial howl!” This passage is from Ernesto Guevara’s famous Motorcycle Diaries, though Robert Redford somehow overlooked it while directing his heart-warming movie.

The Spanish word vencido, by the way, translates into “defeated” or “surrendered.” And indeed, “the “acrid odor of gunpowder and blood” very, very rarely reached Guevara’s nostrils from anything properly describable as combat. It mostly came from the close-range murders of unarmed and defenseless men (and boys.) Carlos Machado was 15 years old in 1963 when the bullets from the firing squad shattered his body. His twin brother and father collapsed beside Carlos from the same volley. All had resisted Castro and Che’s theft of their humble family farm, all refused blindfolds and all died sneering at their Communist murderers, as did thousands of their valiant countrymen.

“The defiant yells would make the walls of La Cabana prison tremble,” wrote eyewitness to the slaughter, Armando Valladares.

The one genuine accomplishment in Che Guevara’s life was the mass-murder of defenseless men and boys. Under his own gun dozens died. Under his orders thousands crumpled. At everything else Che Guevara failed abysmally, even comically.

During his Bolivian “guerrilla” campaign, Che split his forces whereupon they got hopelessly lost and bumbled around, half-starved, half-clothed and half-shod, without any contact with each other for 6 months before being wiped out. They didn’t even have WWII vintage walkie-talkies to communicate and seemed incapable of applying a compass reading to a map. They spent much of the time walking in circles and were usually within a mile of each other. During this blundering they often engaged in ferocious firefights against each other.

“You hate to laugh at anything associated with Che, who murdered so many,” says Felix Rodriguez, the Cuban-American CIA officer who played a key role in tracking him down in Bolivia. “But when it comes to Che as “guerrilla” you simply can’t help but guffaw.”

So for many, the questions remains: how did such an incurable doofus, sadist and epic idiot attain such iconic status?

The answer is that this psychotic and thoroughly unimposing vagrant named Ernesto Guevara de la Serna y Lynch had the magnificent fortune of linking up with modern history’s top press agent, Fidel Castro, who — from the New York Times’ Herbert Matthews in 1957, through CBS’ Ed Murrow in 1959 to CBS’ Dan Rather, to ABC’s Barbara Walters — always had the mainstream media anxiously scurrying to his every beck and call and eating out of his hand like trained pigeons.

Had Ernesto Guevara not linked up with Raul and Fidel Castro in Mexico City that fateful summer of 1955 — had he not linked up with a Cuban exile named Nico Lopez in Guatemala the year before who later introduced him to Raul and Fidel Castro in Mexico City — everything points to Ernesto continuing his life of a traveling hobo, panhandling, mooching off women, staying in flophouses and scribbling unreadable poetry.

Che’s image is particularly ubiquitous on college campuses. But in the wrong places. He belongs in the marketing, PR and advertising departments. His lessons and history are fascinating and valuable, but only in light of P.T. Barnum. One born every minute, Mr. Barnum? If only you’d lived to see the Che phenomenon. Actually, ten are born every second.

His pathetic whimpering while dropping his fully-loaded weapons as two Bolivian soldiers approached him on Oct. 8 1967 (“Don’t shoot!” I’m Che!” I’m worth more to you alive than dead!”) proves that this cowardly, murdering swine was unfit to carry his victims’ slop buckets.