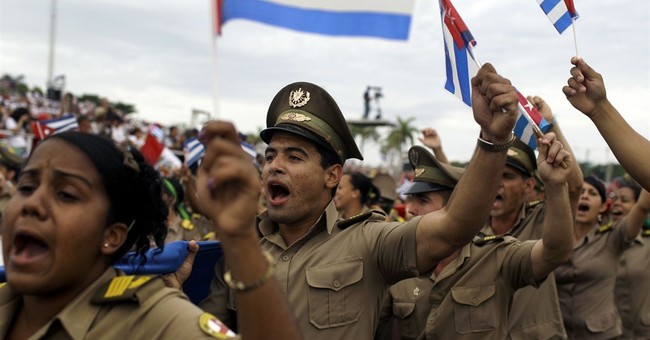 This week the FBI announced a $1 million reward for "information leading to the apprehension" of Joanne Chesimard also known as Assata Shakur who they named a "Most Wanted Terrorist." Chesimard is the first woman to make the FBI’s list. The New Jersey State Police Dept., who also wants her, added another $1 million to the pot.

Convicted cop-killer (of a New Jersey State-Trooper) and "domestic terrorist" Chesimard has been living in Cuba since 1984 as a Castro-coddled celebrity of sorts. And it’s not like bounty hunters can operate freely in a Stalinist country. So the $2 million may be symbolic. As in the U.S. Justice dept. putting on a game face and saying: "Look Castro, we’re serious here!"

In the early 1970’s Chesimard belonged to a Black Panther offshoot known as the Black Liberation Army. "This case is just as important today as it was when it happened 40 years ago," according to a recent press release from Mike Rinaldi, of the New Jersey State Police. "Chesimard was a member of the Black Liberation Army, a "radical left wing terror group that felt justified killing law enforcement officers...This group conducted assaults on police stations and murdered police officers."

In 1973, while wanted for multiple crimes from bank robbery to murder, Chesimard and two accomplices were pulled over for a tail-light violation on the New Jersey Turnpike. As the troopers were routinely questioning them, Chesimard in the passenger seat, and her pals opened up on the lawmen with semi-auto pistols (no word on whether these were properly registered.)

As trooper Werner Foerster grappled with the driver, Chesimard shot him twice--then her gun apparently jammed. As lay Foerster lay on the ground wounded and helpless, Chesimard grabbed the troopers own gun and blasted two shots into his head, much in the manner of her Cuban idols Che Guevara and Raul Castro murdering hundreds of their own (always defenseless at the time) "counter-revolutionary" enemies.

"This crime was always considered an act of domestic terrorism," stresses Mike Rinaldi.

She escaped but was captured in 1977, convicted of murder and sentenced to life plus 33 years. Then in 1979 she escaped from prison--with some ultra-professional help, probably by Cuban or Cuban-trained terrorists. "Two men smuggled into the prison, took guards hostages and broke her out," explained John Miller to CBS News.

Chesimard’s 1979 escape from prison was well planned, Rinaldi explained. "Armed domestic terrorists gained entry into the facility, neutralized the guards, broke her free, and turned her over to a nearby getaway team."

"In 1984, they smuggled her to Mexico. Using a network of Cuban intelligence officers who worked with American radical groups, they got her into Cuba," adds former Asst. FBI Director John Miller.

In 1984 Since then, according to New Jersey State Police Col. Rick Fuentes, Chesimard "flaunts her freedom....To this day from her safe haven in Cuba Chesimard has been given a pulpit (by Castro) to preach and profess, stirring supporters and groups to mobilize against the United States by any means necessary. She has been used by the Castro regime to greet foreign delegations visiting Cuba."

"Joanne Chesimard is a domestic terrorist," declared FBI agent Aaron T. Ford, during a recent news conference. "She absolutely is a threat to America."

Along with Chesimard’s, Castro’s fiefdom provides haven for over 70 fugitives from U.S. law, including several on the FBI’s most wanted listed. Cuba also harbors convicted cop-killers Michael Finney and Charlie Hill, along with Victor Gerena, responsible for a $7 million heist of a Wells Fargo truck in Connecticut in 1983, as a member of the Puerto Rican terrorist group, Los Macheteros. All requests by U.S. authorities for these criminals’ extradition have been rebuffed, often cheekily by Fidel Castro himself: "They want to portray her as a terrorist, something that was an injustice, a brutality, an infamous lie!" Castro answered a U.S. request for Chesimard on May 3, 2005.

By the way, just this week Raul Castro’s daughter (Fidel’s niece, Che’s god-daughter) Mariela Castro was a granted a U.S. visa to attend the "Equality Forum’s annual conference on civil rights for lesbians, gays, bisexual and transgender people." In brief, this apparatchik of the Stalinist regime and of the same "State Sponsor of Terrorism" that fetes U.S. cop-killers-- indeed that helps them escape from U.S. jails-- will headline a sort of gay rights-palooza in Philadelphia were she’ll be honored with an award for her tireless contributions on behalf of Human Rights.

In brief, an outfit (Equality Forum) headed by Malcolm Lazin and dedicated to criminalizing "anti-gay bullying" (in the U.S.) and ferociously dedicated to prosecuting such "bullies" to the fullest extent of (U.S.) law and sending them to jails cells (in the U.S.)--this SAME outfit is honoring a high-ranking apparatchik of the only regime in the history of the Western Hemisphere to herd thousands of men and boys at Soviet gun-point into forced labor camps surrounded by barbed wire and machine gun posts for the crime of fluttering their eyelashes, flapping their hands and talking with a lisp.

And we wonder why Fidel, Raul and their guest Joanne Chesimard are all laughing heartily from Cuba?