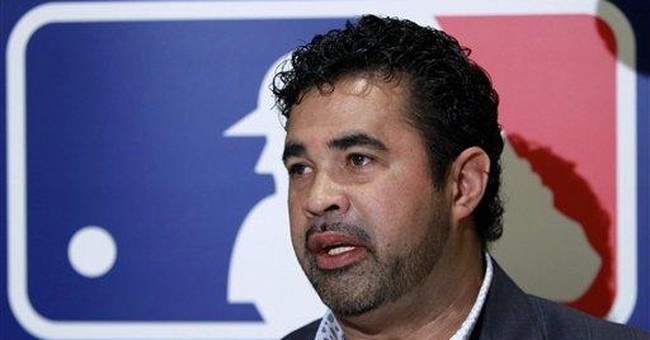 “I am here on my knees,” he whimpered. “I am here to say I am sorry with my heart in my hands…I hurt a lot of people’s feelings. Now I want to apologize because I did the wrong thing. It was a very stupid comment...This is the biggest mistake so far in my life. If I don’t learn from this mistake, then I will call myself dumb.”

As if hailing a Stalinist dictator who jailed political prisoners at a higher rate than Stalin himself during the Great Terror, murdered more Cubans than Hitler murdered Germans during the Night of Long Knives, repeatedly craved to nuke Ozzie’s adopted country and shattered the lives of half of Miami’s families were some kind of offense in this country! (except for ticket-sales.)

Many luminaries in the Democratic party and mainstream media must be snickering at the hapless Ozzie Guillen.

Take the very Time magazine that quoted his “respect” for Fidel Castro. In their “Heroes and Icons" issue Time honors Fidel Castro’s chief hangman Che Guevara as among the most heroic and iconic of the lot, right alongside Anne Frank, Andrei Sakharov, Rosa Parks and Mother Theresa. “This obscure Argentine doctor who abandoned his profession and his native land to pursue the emancipation of the poor…" starts their eulogy. For the record: no record of Ernesto Guevara’s medical degree exists.

Take two-time candidate for the Democratic Presidential nomination Jesse Jackson. “Viva Fidel! Viva Che!” he bellowed while arm in arm with Fidel Castro himself in 1984.

Take Democratic presidential candidate, Presidential Medal of Freedom winner, and “Conscience of the Democratic party,” George Mc Govern: "Fidel Castro is very shy and sensitive, I frankly like him and regard him as a friend."

Take former President of the United States and official ‘Elder Statesman” of the Democratic party, Jimmy Carter: “Fidel Castro first and foremost is and always has been a committed egalitarian. He wanted a system that provided the basic needs to all -- enough to eat, health care, adequate housing and education. Cuba has superb systems of health care and universal education…We greeted each other as old friends.”

Take Dan Rather: “Fidel Castro could have been Cuba’s Elvis!”

Taken Colin Powell while serving as Sec. of State under George Bush. “Fidel Castro has done some good things for Cuba.”

But actions speak louder than words. So take Rep.Charles Rangel who during a thundering ovation in the mass-murderers honor in Harlem’s Abyssianaian Baptist Chruch in 1995 and between deafening chants of, FIDEL!---FI-DEL!--VIVA-FI-DEL!", and with Congressperson Maxine Waters looking on in rapture, waddled up to the podium beside the terrorist who had almost incinerated them all and-- oomph!--engulfed him in a mighty bear hug.

Take Time Magazine in January of 1996 when they hailed Fidel Castro as "The Toast of Manhattan!" The title referred to Castro's reception by Manhattan's beautiful people on the terrorist/torturer’s visit to New York in 1996.

"The Hottest Ticket in Manhattan!" also read a Newsweek story that week, referring to the social swirl that engulfed Castro in New York by the media luminaries who barely escaped nuclear incineration by his hand. These included Peter Jennings, Tina Brown, Bernard Shaw, Mike Wallace, Barbara Walters, among many, many others. Fox News David Asman, then with the Wall Street Journal and obviously smitten, approached the man who came within a whisker of incinerating him and smilingly asked for Castro’s autograph.

In fact, all in attendance clamored for autographs and photo ops of the Stalinist who craved to nuke and entomb them. Diane Sawyer was so overcome in the mass-murderers presence that she rushed up, broke into that toothy smile of hers, wrapped her arms around Castro and smooched him warmly on the cheek.

"You people are the cream of the crop!" beamed the mass-murderer to the smiling throng that surrounded him.

"Hear, hear!" chirped the delighted guests while tinkling their wine glasses in appreciation and glee.

In fact in an interview with Men’s Journal back in 2008 Ozzie Guillen had spoken fondly of Fidel Castro: "Everywhere he (Fidel Castro) goes, they roll out the red carpet. I don’t admire his philosophy; I admire him."

Maxine Waters Calls For Riots to Continue: We Must Stay in the Streets
Townhall
BOOMAGE! Megyn Kelly has a serious warning for Heads of School determined to shove Critical Race Theory down students' throats
Twitchy
San Francisco Ordinance Requires Property Owners to Make Lifetime Rental Offer to Tenants — for Real
Redstate
You Will Not Believe the INSANE Proposals This City Is Considering for 'Reimagining' Public Safety
PJ Media