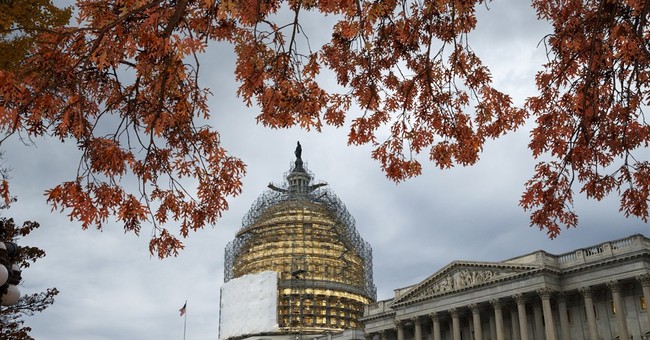 The very first action taken by the lame duck Congress in the House will be a betrayal of the military and the voters who just gave them a larger majority and their colleagues in the Senate control. The lame duck House is scheduled to pass --perhaps as early as today-- a National Defense Authorization Act ("NDAA") which cuts the scheduled pay hike for the military from 1.8 percent to 1 percent, which slaps a co-pay on all their prescriptions --real dollars every time every military kid gets an ear infection, and a huge hit for any military family with a serious illness-- and which reduces the "Basic Housing Allowance" which means that young soldiers, sailors, airmen and Marines and their families won't get the traditional housing allowance they need to live off the base when there is no base housing for them. They will instead get some mathematical formula that says the BHA each service member should receive will be 1 percent less than inflation in their market, which tells every single military spouse "living on the economy" to find the rent hike from their own budgets. (If you are actually interested, here's the monthly pay chart for the troops.)

For a 21 year-old trooper, the pay cut is about $200 in 2015, the prescription costs whatever it turns out to be, and the hit on his or her family's own pocket book depends on where they live, but they lose some no matter where they live and more where the housing is expensive. In addition to this, the cuts are of course cumulative over all the years of their career ahead of them: A 1 percent cut this year is a cut that grows and grows in significance every year. It is the reverse negative of compound interest. The impact on a mid-career enlisted family is much larger.

Amazing how the electeds are so very concerned with the troops while campaigning, and instantly toss them overboard upon re-election.

The lame duck House, led by retiring HASC Chairman Buck McKeon, who is tarnishing a long-standing reputation for standing with the troops by this surrender to the president, Harry Reid and retiring Senator Carl Levin, is said to be scheduled to pass the bill shortly. The rush to pass the NDAA in the lame duck is reported to be so that the NDAA can be named for McKeon and Levin. Seriously. This one is as stupid a move as "the Cornhusker Kickback": To want to be remembered for screwing the military in your last month in elected office with your last significant act. Even more amazingly, the GOP members didm;'t even fight one day in public. They returned to D.C. and caved in to the president's demands.

This is why I tangled with an old friend of the show yesterday, Oklahoma Senator James Inhofe --the audio and transcript of that exchange are here.

The Senate is next and it is there that some courageous Republicans could stop their party from this stupid, stupid act:

The bill is supposed to be introduced in the House this afternoon. A senior Senate aide said the bill should make it before the Senate sometime next week. The goal is to pass the bill there using a wonderful mechanism known as Unanimous Consent, whereby everyone agrees to refrain from adding amendments and requesting a vote. But, as the senior aide intoned: “Life is always difficult in the Senate.” The odds are pretty good that it will pass.

Any GOP senator facing re-election in 2016 should make this proposed process difficult and work to derail it. Each of them ought to be willing to filibuster to stop these cuts. There is no serious reason --none-- to allow the lame duck Congress to dictate these terms. The 2016 Republicans ought to insist on repeal of the cuts to the troops' pay, benefits and housing or refuse to fund the Pentagon until the new Congress is seated then do so asap. Everyone knows any "missed pay" will be restored. Ditto any missed re-enlistment bonuses etc. The GOP has zero reason to cave on these issues.

Do Lisa Murkowski in Alaska, Marco Rubio in Florida, Johnny Isakson in Georgia, Mark Kirk in Illinois, Dan Coates in Indiana, Roy Blunt in Missouri, Kelly Ayotte in New Hampshire, Richard Burr in North Carolina, Rob Portman in Ohio, Pat Toomey in Pennsylvania, and Ron Johnson in Wisconsin --all of whom are on the ballot in 23 months in what is expected to be a tough year-- not see that a vote to cut the military's pay and benefits will haunt them? Really haunt them? And since any one of them can stop it, each will carry the burden of not having done so. So why don't they? They all saw what happened when they voted for the deal to cut career military earned retirement benefits in late 2013 --a revolt that lasted until its repeal in the Spring and then came back to haunt many Democrats who voted for it in 2014.

Every single one of these Senate Republicans will rightly get blasted for cutting military pay and benefits for the next two years because the Carl Levin rolled Buck McKeon. Without a fight. Without one appeal to the public of for help. Just a surrender.

So they should stand up in the GOP Senate Conference and refuse to go along and pledge to stop it. This will be mildly embarrassing to Senator Inhofe and Buck McKeon and the HASC and SASC GOP staffs, but they will get over it and in fact will be relieved. And the GOP base will see its just re-elected leadership actually fight for a strong military, a key part of the pledge in every election campaign just completed.

So call the senators listed above via 202-225-3121 and urge them to stop the flawed NDAA. Tell them to do whatever it takes, including filibustering until Harry Reid forfeits the gavel. They can do it if they want. Their self-interest dictates they should, and the genuine interest of hundreds of thousands of warriors and their families demands that they do.

The Twitter feeds for the key GOP senators facing re-election in 2016 are: @LisaMurkowski @MarcoRubio @MarkKirk, @RoyBlunt, @KellyAyotte, @SenatorBurr, @RobPotman, @SenToomey and @SenRonJohnson, from Alaska, Florida, Illinois, Missouri, New Hampshire, North Carolina, Ohio, Pennsylvania, and Wisconsin respectively. Let them know what you think. You can be assured their staffs monitor their twitter feeds. Ask them to block the NDAA, even via filibuster if necessary, until these cuts are reversed.