The Debt Limit and the 2014 Elections: The GOP Should Plan And Campaign In The Key Of Common Sense 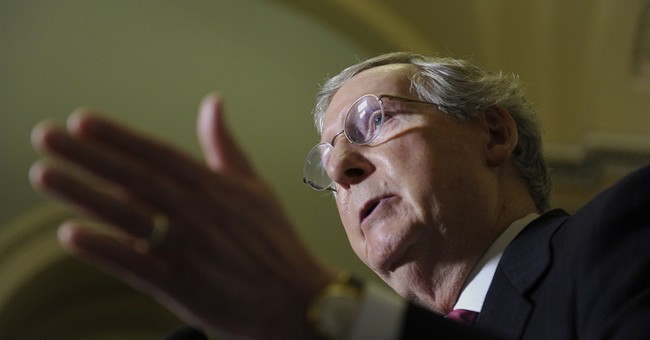 My conversation with GOP Senate Senator Mitch McConnell on air Thursday made it obvious that he cannot plan or execute a Senate GOP strategy on the debt limit until the House GOP passes some sort of a debt limit bill and sends it over to the Senate, and even then no one can ever underestimate Harry Reid's twists and turns after it arrives. Damien Paletta has the latest details in the Friday Wall Street Journal, and it is clear that the House GOP leadership is floundering. Again.

The GOP again played into the MSM narrative by not putting something on the floor this past week and trying to get it passed with or without Democratic votes. They have to return next week and actually act, not whisper to each other and the occasional favored reporter. If the first GOP package fails, they try again. But rather than starting with paralysis followed by retreat, start with common sense.

The GOP isn't going to trigger a default, not with the 2014 focus squarely on Obamacare and not the debt, and not with the memory of the shutdown already faded and very few in a hurry to play a second game of chicken after appearing to lose round one only to a huge overtime win because of the ghastly and truly unprecedented collapse of Obamacare's rollout. We can debate forever what went wrong and right in the fall and whether Senator Cruz's branding strategy was inspired or a near disaster, but in early February, 2014, the GOP looks to be in a solid position to win a convincing victory in the fall --if they don't blow it right now.

Some observations: Though various GOP electeds have tried to interest people in the issue, no one but no one --NO ONE as is "ZERO"-- is calling or emailing the show exercised about "risk corridors" and bailouts for insurance companies that haven't happened yet. Very few people understand what it means and those that do aren't making the phone ring. People. Don't. Care.

No one wanted immigration reform either, and as Senator McConnell confirmed yesterday, it isn't happening in 2014. Maybe the Congressional GOP is developing the ability to actually listen to a very well-wired world that is watching very closely and whose opinions can accurately be gauged by paying attention, and that is a good thing iof the trend continues.

People do very much understand and deeply care about and resent the cut to the career military COLA and do very clearly understand and want repealed the awful medical device tax. So the House GOP leadership should again listen and respond. A repeal of both attached to the debt hike would be a potent package that many Democrats in both chambers will have to vote for. Indeed, the GOPers who wouldn't vote for such a package won't vote for any package at all, so why not get an accurate head count of the GOPers who don't care about any 2014 elections other than their own?

Again, given these realities, why hasn't that package been put to the caucus for a vote? If that proposed double win on the repeals of the career military COLA cut and the medical device tax doesn't get whatever critical mass the Speaker is looking for --the Hastert rule is clearly not in force at this moment-- why isn't package after package being discussed and voted on rather than gossiped about? Inside baseball wisecracks don't make for a winning strategy with either the base or the undecided middle that is currently more angry with the Democrats than the GOP, nor is waiting for Democrats to steal a march a good idea either. (Arkansas endangered Democratic Senator Mark Pryor desperately wants to author the repeal of the military COLA cut he voted for and Congressman Tom Cotton opposed; why would the House GOP let him get even that slippery handhold? In hopes that he will say out loud that he was for the COLA cut before he was against it?)

The time to tackle the deficit and entitlement reform will be with both Houses of Congress in GOP hands, next December and beyond. That won't happen if the GOP botches this moment, and time isn't on their side. Call your House GOP member and tell them to demand the COLA and medical device tax repeal and get on with it ASAP. Their switchboard is 202-224-3121.

Once a debt limit bill passes the House, see what the Senate does, and if Obama-Reid choose obstruction, start talking now about Democrats refusal to undo the damage they inflicted on the vets and on entrepreneurs all a cross the country even as Harry Reid risks default. Thus does the GOP repair the damage done to the national security conservatives and keep the debate focused at least on a part of Obamacare the public gets --the most stupid of the bill's many stupid revenue features.

Many emailed and asked again for the 2014 list of Senate races I discussed Thursday in which the GOP candidate is likely or in the hunt to win a seat held by a Democrat, and asked where they should spread their "small donation" money. (It really does matter, these $50 and $100 checks. Really.) The list is below with a number behind the race that indicates my personal priority for donations. (I think Mike Rounds in South Dakota and Shelley Moore Capito are locks, so my numbering system puts them at the bottom though they are the GOP's strongest bets. The Cotton-Pryor race in Arkansas is priority number 1 for me, and the campaigns of Terri Lynn Land in Michigan, Thom Tillis in North Carolina and Ed Gillespie in Virginia are my recommendations for the next three "gives" at this time as other races need clarity from primaries or better polling data.)

The path to 51 (or more) Senate seats is very clear, but only if the GOP caucus gets past this debt limit iceberg and on to hearings, hearings, hearings and a focus on Obamacare at home and Iran/Syria/Libya abroad. It would also help to keep attention on the "cut-Defense-first-deep-and-only-Democrats" as well by focusing on the insane plan floated this week by President Obama and Secretary Hagel to reduce the carrier fleet by retiring the George Washington, even as the PRC surges into its blue water navy era.)

Rep. Steve Daines v. Sen. John Walsh in Montana ( the Lt. Gov. of the state who is expected to be appointed to replace Max Baucus very soon.) (*T2)

Fauci: A Second Wave of Coronavirus in the Fall May Not Be Inevitable After All
Guy Benson

Reagan McCarthy
CNN Correspondent, Crew Arrested While Reporting Live in Minneapolis
Leah Barkoukis
The WHO Is Telling Us Something Else About Mask-wearing
Leah Barkoukis

A Judge Rules Rachel Maddow is a Fake News Fabulist and Not a Journalist
Redstate
MSNBC reporter in front of burning liquor store: Protest “not generally speaking unruly”
Hotair