Winning in the Anti-Freeze Belt 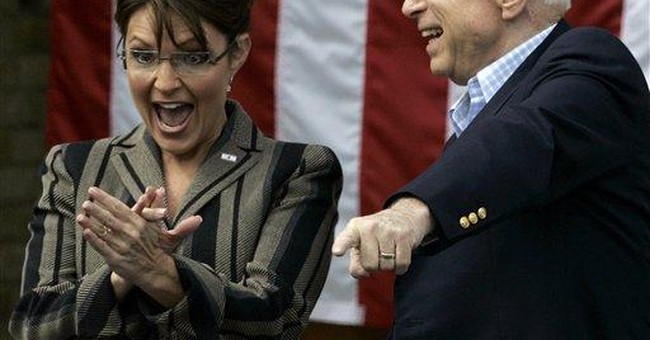 Do you carry tire chains in the winter? Do you own snow tires? Has anti-freeze ever been a part of your life?

There are states where winter weather requires not so much resolve as accommodation. States where routines built on generations of experience take over after Labor Day as the approach of Old Man Winter obliges the prudent to prepare.

Many of these states have been colored a blue shade of politics in recent years: Maine, New Hampshire, Pennsylvania, Michigan, Wisconsin, Minnesota, Iowa and Colorado. All of these states lean Democratic, and are expected to do the same again in November.

But the addition of Sarah Palin to the GOP ticket changes things, and in some places quite a bit.

“Would you like to campaign with her,” I asked Minnesota Senator Norm Coleman, matched against the washed-up comedian and failed radio talk show host Al Franken in the fall.

“Any time, any where, any day,” Norm replied with enthusiasm. “She can lace up a pair of skates and hunt with the best of them. She will do very well in many, many parts of my state including many of the Democratic strongholds like the Iron Range.”

There in a nutshell is the Palin appeal, the quality that has Democrats quaking and the Beltway-Manhattan media elite on a mission to destroy her career before its potentially realigning effects can be felt at the ballot booth.

Sarah Palin is a self-reliant, achievement-oriented woman of the north, as bracing a blast of fresh air as ever met you on a January morning, and lots of northerners of both genders and all political stripes know what that means and respect what it embodies. They identify with the character that grows up in the Maine woods or the Michigan UP or the west slope of the Rockies. Those of us who grew up in the Snow Belt and who know what “lake effect” mean know as well that she knows what it is to deal with aftermath of three feet of fresh powder. Even the hardiest of northern souls in the lower 48 admit –grudgingly—that Alaska is a different order of north.

There’s a smile and a lot of respect in that recognition.

And even the hardest working man or woman no matter where they live but especially if they live in a place where commuting means hoping the battery will start will note that commercial fishing is no one’s idea of a soft job.

Sarah Palin has burst on the national scene, but she is also going to be a force to be reckoned with on the electoral map. In each of the states named above (and my always-on-the-edge home state of Ohio to boot) there are large populations of hunters and outdoorsmen and outdoorswomen, farmers and resource workers and the families they provide for. There are ice-fishers and snowmobilers and cross-country ski and snow shoe wearers.

We haven’t had a northerner like Palin in the Vice President’s mansion since Jerry Ford. Dick Cheney’s a westerner for sure, and Lynne Cheney’s memoir, “Blue Skys, Open Fields,” makes clear that the Wyoming of their youth was plenty cold, but Dick Cheney, like Jerry Ford before him, came into office after long residence away from the wilds that surrounded them growing up. Their characters were shaped by the outdoors, and they enjoyed them still, but being fresh from the mountains and wind chills deep-below-zero is unique for Palin.

And it matters. A lot. In a lot of places.

I have written before about the other communities Palin is connecting with at an emotional level. Millions of women, of course, but especially mothers and specifically mothers of troops and mothers of children with special needs.

She’s also got the emotional wiring of a small business owner and a local elected leader.

She is, famously, a hockey mom and a moose hunter, a boater and the wife of an aging outdoors’ competitor.

She is connecting on so many levels because her life has been lived on so many fields.

Many of those experiences are distinctly northern, and largely unknown or forgotten to MSM-types who won’t know whom to ask for an opinion on Palin. Movement towards her in unlikely places may be tough to detect for the Beltway media mandarins, so watch those blue places to see if they warm to a kindred soul in the next 60 days.