“A World Without Borders" 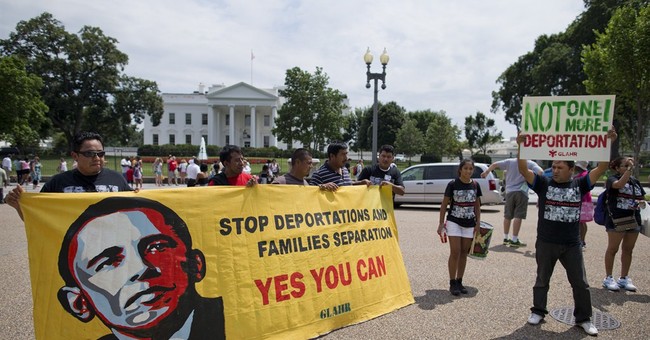 Policies emerging from the Obama administration are often perplexing. Why give ISIS a virtual free hand in destroying Iraqi and Syrian borders? Why does the administration support a European Union that is gasping for political breath? Why has the Obama team allowed Latin American youths to cross our border in violation of national sovereignty?

Suppose President Obama has a vision of a world without borders, a one world government. This is hardly a new idea, nor is it a vision of the hard left that has departed from its historic ambitions. In some respects, it is not dissimilar from the radical Muslim goal of a global caliphate. The difference, of course, is that won’t be achieved through a shared humanity and common purpose.

How this happens is anyone’s guess? Presumably rationality – unknown till then – penetrates the forces of darkness with the emergence of a brave new world. Yet the current world scene doesn’t offer much encouragement. The Sykes-Picot lines drawn in the sand after the fall of the Ottoman Empire are evaporating before our eyes, but what will be left in their wake isn’t encouraging. These are likely to be tribal, narrowly denominational states. Moreover, since the president has vowed not to intervene, we are obliged to sit on the sidelines as dangerous actors influence the fate of the Middle East.

A Europe that, since German unification, has harbored a dream of continental unity, is in the throes of dissolution due to economic woe and the inability to withstand nationalistic antecedents. What finally precipitates a breakup is hard to reckon, but fiscal policy controlled by states and regulatory policy controlled by a continental bureaucracy is a formula for political tension.

The massive flow of youngsters crossing the Mexican border into the United States with the active duplicity of drug cartels and the seeming acquiescence of the U.S. government has reduced sovereignty to a concept of yesteryear. This policy, or lack thereof, may suit Obama’s dream of a permanent Democratic majority when “illegals” are given amnesty and the consequent right to vote, but it is yielding a backlash in border states that may turn around normal Democratic districts. To understand what a world without borders would resemble all one has to do is visit the Texas towns on the U.S. side of the Rio Grande. It isn’t a pretty picture.

President Obama has noted that these conditions are unpleasant, but a new order based on a “different set of principles,” a “sense of common humanity” is just over the horizon. For him, “No world order that elevates one nation or group of people over another will succeed. No balance of power among nations will hold.” These comments are nothing short of ahistorical nonsense. Some nations have dominated other nations. All one has to do is observe Putin’s actions in Crimea, in defiance of the Budapest Accord with guaranteed Ukrainian sovereignty including Crimea, to understand the absurdity of a claim. Balance of power politics hasn’t been removed from international politics whatever the president’s wish may be. It is precisely this balance that the U.S. helped to establish across the globe since the end of World War II and a balance many allies continue to rely on.

A desire to relinquish American power and influence doesn’t lead to the sharing of principles and a common humanity; it promotes chaos. The estimable political philosopher, Leo Strauss wrote of Weimar Germany, it is “the sorry spectacle of justice without a sword or of justice unable to use a sword,” conditions that led to the barbarism and savagery that followed in Nazi Germany.

Alas, Obama’s utopia is filled with idealism and promise. What it lacks is realism and a basic appreciation of world history. It is one thing to regard history as a dream from which we should awaken. It is quite another thing to ignore it completely and assume a world without borders is possible.