Helen Raleigh
|
Posted: Jan 16, 2016 12:01 AM
Share   Tweet
The opinions expressed by columnists are their own and do not necessarily represent the views of Townhall.com. 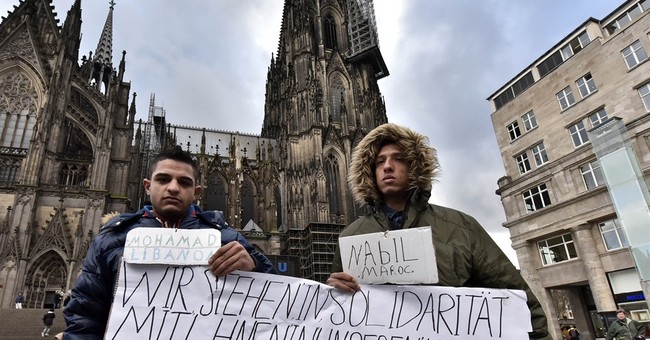 The news from Cologne Germany is getting worse every day. Ever since the news broke about German women being sexually assaulted by migrants on the New Year's Eve in Cologne, the number of complaints has been rising steadily and reached 516 as of last Sunday. Among the 516 complains, 40% of them were sexual offenses, including two rape allegations. Several other German cities reported similar coordinated sexual assaults on a smaller scale.  Local police and government officials were criticized not only for their failure to prevent such assaults from happening, but also for their initial hesitation to acknowledge the attackers immigration status for fear of an anti-immigration backlash.

Unfortunately, what happened in Germany on the New Year's Eve was not an isolated incident. Other European countries such as Austria, Switzerland all reportedsimilar coordinated assaults on women and some incident went back several years. We didn't know about any of these because police and government officials were more concerned about any backlash against migrants than the safety of their own citizens. Now government officials have issued warning to women advising them not to go outside alone. What's next? Are they going to ask a woman not to go anywhere without a male companion? Or women should cover themselves up to avoid any unwanted attention?

It's hard to believe the Europeans did not to see this coming. Not so long ago, just last year, several UK cities, including Rotherham and Birmingham, reported thatpredominantly Pakistani grooming gangs targeted English school girls, some as young as 11 years old for decades.  These girls were fed with drugs and alcohols, and then were sexually abused and raped. In the city of Rotherham, it is estimated about 1,400 girls were groomed and sexually abused for sixteen years.  Local police and government officials knew about it for years, yet failed to stop it or issue any public warning for fear of being called racists.

While we should absolutely hold anyone who committed such crime accountable, it's time for Europeans to abandon their liberal policies driven by multiculturalism, which advocates equality among all cultures, including those cultures antithetical to not just western values but basic humanity. Women throughout Europe are the latest victim of such multiculturalism nonsense. Guess what? Not all cultures are created equal. Some are absolutely worse than others.  Cultures which believe a woman shouldn't drive, or treat woman as nothing but a sexual object, or practice "honor killing", should not be tolerated or accepted in a society which promotes individual rights and human freedom.

Multiculturalism is not just ruining Europe and victimizing European women, it has already weakened the very foundation of America. Have you heard of female genital mutilation (FGM) or female circumcision? FGM, also knowreport, "California is the state with the largest number of at-risk women and girls, with 56,872, followed by New York, with 48,418, and Minnesota, with 44,293." FGM is on the rise in the US due to both the increasing immigration from African and Middle Eastern countries and our own muted response under the influence of multiculturalism. How could we Americans tell these young girls on the one hand that they can be anything they want to be because they live in a free country, yet turn a blind eye on the other hand for their inhuman suffering because it's culturally acceptable due to multiculturalism?

As an immigrant and a woman, I don't want to deny anyone's right to "life, liberty and the pursuit of happiness." I have always been and always will support legal immigration. I will continue to celebrate Chinese New Year and St. Patrick's Day. But there is a big difference between appreciating a culture versus unconditional tolerance. I wish more people, especially politicians, would have the backbone to reject multiculturalism, and insist that any culture whose values and practices violate human freedom has no place in America.