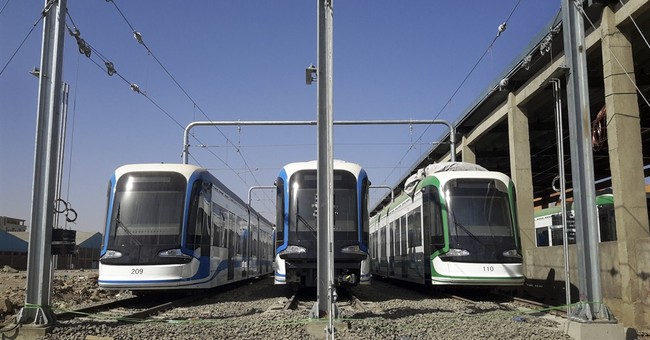 You know our country is in serious financial trouble when lawmakers are considering selling a portion of the Strategic Petroleum Reserve (SPR) in order to partially replenish the U.S. highway trust fund. Yet, the apparent financial distress doesn't stop the Department of Transportation from continuing to hand out millions of federal matching funds to entice local governments to either expand or build light rails under its "New Starts" program.

Several U.S. cities jumped on the fed induced light rail frenzy. The latest example is Lone Tree, Colorado, a picturesque small town with a population of 13,267. The Lone Tree city council just approved an expansion of the Southeast light rail line for 2.3 miles, with an estimated initial capital cost of $207 million. That is almost $90 million per mile! The national average is well over $100 million per mile. Since government bureaucracy historically has underestimated initial capital cost of construction, we can expect the final actual cost for Lone Tree's 2.3 mile rail extension will be way higher than $207 million. Exhibit A is the West Rail Line in Denver, with a price tag of $707 million, costing more than twice the initial cost estimate of $350 million. Light rails are not only expensive to build, but cost even more to maintain. Are there tremendous benefits to justify this kind of astronomic cost? The answer is "no!"

Unlike the movie "Field of Dreams," just because light rails are built, doesn't mean people will come. Actual ridership of light rails is consistently much lower than bureaucrats’ overly optimistic estimates. The Denver Regional Transportation District (RTD) projected that the West Rail Line would carry 29,000 people each week in its first year of operation. Yet, the actual ridership was only about one third of that projection. Even this was only achieved by the RTD cutting off six bus lines so people were forced to take the light rail. After so many long term bus riders’ (many from low income families) complaints, RTD was forced to resume those bus lines. So nowadays, the West Rail Line runs pretty empty. Lack of ridership is not a regional issue, but a national phenomenon. Cities such as Portland, Dallas and St. Louis, which have the most highly regarded light rail systems in the nation, carry fewer than 2,000 riders per peak hour in the peak direction.

Fewer riders of light rail means more people remain on the road. Therefore, light rails are not as effective in terms of reducing traffic congestion, as the city planners had hoped. As a matter of fact, studies from the Cato Institute show that a bus line is a much more cost-effective alternative than a light rail.

Why don’t more people take light rails? Light rails' limited schedules and destinations are simply not appealing to many of us. We the people prefer to have the freedom to drive ourselves to wherever we want to be, whenever we want to. For those who don't own a car or prefer not to drive, the free market has already offered many choices. Want to go somewhere? All you have to do is to click an app on your smart phone, and an Uber driver will pick you up in 3 minutes or less.

"Light" rails represent a heavy financial burden to taxpayers. They are a waste of taxpayers’ hard earned money. They are nothing but a form of welfare: in Denver, a one-way light rail ticket costs $4.20, even though the actual cost is about $22.00. The Regional Transportation District (RTD), Denver's light rail operator, has never recouped its costs, has never made money and never will. Had it been a private enterprise, it would have had to shut its doors a long time ago.

But why do city officials, like Jim Gunning, Mayor of Lone Tree, ignore the historical track record of light rails and so eagerly embrace another expensive light rail project which will cost taxpayers $207 million? Among the reasons the mayor gave: first, $92 million out of the $207 million will come from the Department of Transportation's "new starts" grants. So it is "free" money. In the mayor's own words, "if we don't take this free money, other cities will." I am not surprised that politicians like to spend other people's money, especially if they themselves do not have to raise it. But the mayor should have known, whether the money is supposedly from the federal government or the local government, it ultimately comes down to taxpayers like you and me, who not only have to cover the upfront capital costs but also the costs of long-term maintenance.

The second reason Gunning gave was more bizarre. He declared that since Portland, Dallas and several other cities are building light rails too, it must be a good idea. I remembered when I was growing up, I once asked my mother if I could buy something because all my friends had it. My mother always said, "If everyone else jumps off the cliff, will you follow them too? A stupid act is a stupid act, no matter how many people are doing it." I wish my mother was at the Lone Tree city council meeting so she could tell the mayor.

Fortunately, not all politicians think like Gunning. Councilwoman Kim Monson voted no on the light rail expansion project. Unfortunately, her lonely voice of conscience was overruled by other politicians who are eager to jump off the fiscal cliff, and taking every one of us with them!