The Bail Out Blues 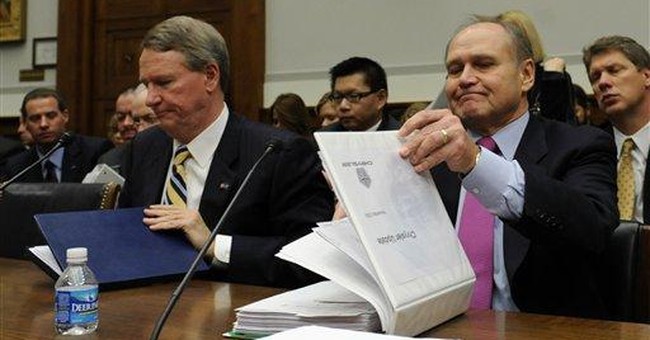 Last week I was forced to look at the car crisis head-on. The lease on my expensive, foreign luxury car had finally come to an end. The car was not eco-friendly, gas conserving, or compatible with my desire to keep the American car industry afloat. Motivated to help both the nation and my pocketbook, I scoured domestic models and found that I could save money and fuel by buying American.

No, I am not a Prius driving, latte drinking, east-coast intellectual. Yes, I could have striven more to minimize my carbon footprint on the earth. But it seemed to me a great time to buy to support Detroit. As I got engrossed in my “little step” to save an American industry and the Jackson fortune, I realized that one of the reasons the American auto industry is not competitive is that they offer too many choices – too many models, too many colors, and too many options. Suddenly “a blinding flash of the obvious” entered my world – nothing short of a stem-to-stern overhaul will help the auto industry at this juncture in history.

Although the proposed bailout of the big three auto manufacturers has shocked the nation, I can remember discussing the industry’s woes nearly thirty years ago in business school, when the famed Lee Iacocca worked his genius and innovation. The current problems are anything but new. The problem has been that nobody has had the boldness to take on the task of correcting the course of the industry.

As a former steel industry employee, I know that competing with foreign manufacturers in high fixed-cost industries can be tricky. The newcomers have an advantage technologically. They purchase the latest, most cost-effective equipment and target their efforts at the most profitable segments of the going concerns. Time and time again, high-cost plants with heavily entrenched unions have been a major factor in drowning stable American industries in a sea of expenses – making them uncompetitive.

In addition to all of these problems, the big three have a decreasing market share in a diminishing market, while they are drowning in debt. If these were other businesses in nations overseas they would have been tossed aside years ago. Fortunately for them, America cannot afford to lose an industry that involves 1 out of 10 jobs. Although we all can agree with the premise that the industry has been mismanaged, we can also agree that now is not the time to let them go down the tubes. A painful reminder of this fact came last Friday when official data showed that the nation had lost 533,000 jobs in the month of November alone.

So let’s face the music and stop bellyaching! An auto bailout is coming and it is probably the only thing we can do in this economic and political environment. In fact, Congress reached an agreement in principle this weekend to lend billions of dollars to our struggling carmakers. This has all been done to avert the industry’s collapse. Most experts agree that this is about half of what the auto chiefs need to keep them afloat.

The only silver lining in this dark cloud is the fact that the national awareness of this process gives us an opportunity to make changes and force corporate accountability. Listed below are the 4 steps I would like to see in the bailout structure.

First, our legislators should strongly encourage GM and Chrysler to merge. This move would allow major cost cutting within the “new company.” Although many jobs would be lost, it would give some market share “breathing room” for the two domestic companies, which would remain.

Second, Congress should engage the companies to enter in an unofficial “bankruptcy-like” reorganization in which all parties make major sacrifices. This step would be comprised of the following four mini-steps:

• Management, labor, and suppliers would have to make major concessions to make the companies viable again.

• Immediate financial help should only be given if a new structure with competitive management and labor salaries is established.

• Excessive benefit and retirement packages should be rolled back immediately. Large debts levels must be negotiated down or some how converted to equity.

• Enterprises must be “right sized” to a sustainable level. This probably means the loss of 15% to 25% of each company’s workers.

Third, banks will have to be encouraged to loosen credit. Credit is needed to help manufacturers create strong central inventories for each region of the country. Dealership inventories are also managed by credit. Finally, aggressive consumer financing programs for both lease and purchase of American vehicles is needed to move cars. After all, many buyers wonder if they are purchasing a product that will not be serviceable in three years or be unable to trade-in later. In light of these factors, all domestic manufacturers should be enabled to offer great purchase packages for the average, stressed-out American.

While we don’t want a repeat of the sub-prime problem, the companies have to move their 2008 inventories and sell all of their paired-down 2009 offerings. It is important to note that a number of the high–end American vehicles do not even have lease programs. This is probably because of the difficulty companies will have determining accurate residual values on these vehicles. Nonetheless, many small business owners and salesmen will be scared off by non-competitive financing programs on vehicles costing $40,000 and more.

So let’s roll up our sleeves and work things out, while not nationalizing the auto industry. It will be a delicate balance. Let’s live out the words of the Dave Clark Band of years ago, “Come on people, now; Smile on your brother! Everybody, come together; try to love one another right now!”