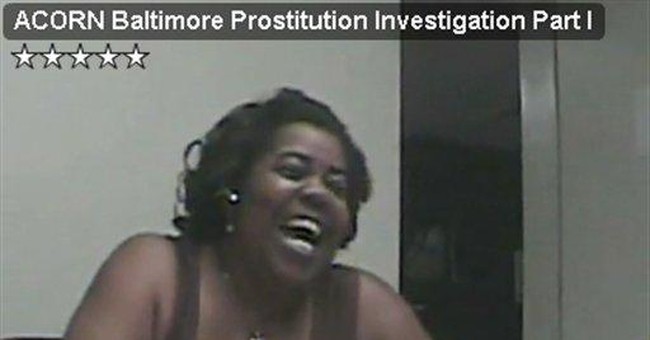 The “Pimp and Pro” story, exposing ACORN’s willingness to advise a prostitute on tax evasion and child sex trafficking, hit America a few weeks ago. There were a myriad number of angles to report, yet the Mainstream Media's favorite approach seems to be the method in which James O’Keefe and I orchestrated and gathered the information.

It’s like going fishing, but instead of taking a picture and raving about the 750lb Mako shark you caught, you blather on about the bait that was used.

Rather than simply complaining about the MSM’s negligence on the story, here are some loose ends the media ignored, from our footage alone, that warrant attention.

With regard to the children:

• Baltimore- Why no mention of the toddlers that were in the room while James and I were being counseled on how to manage our underage prostitution ring?

• San Bernardino- The content of this video was largely ignored except for the part where ACORN worker Tresa Kaelke mentions she shot her husband. What about when she told us not to educate our sex-slaves because they won’t want to work for us? Or when we talked about making money off of clients who would physically abuse the girls? What about the whole transport-the-girls-in-a-school-bus-to-avoid-suspicion discussion?

Attention to the masses:

• Brooklyn- This office was swarmed with people, busy staff members and a full waiting room. Did we take our number and wait in line? Nope. Why were we given the private attention of three ACORN staffers when clearly more deserving and less intrusive (and even possibly law-abiding!) clients patiently waited?

• San Bernardino: What happened to the list of politicians that Ms. Kaelke rattled off when she spoke of her ACORN office’s community involvement and influence? Has anyone set out to uncover just how close these politicians’ relationships are with the San Bernardino ACORN? Does anyone even remember the names?

• San Diego: Has anyone questioned why ACORN employee Juan Carlos would want to help smuggle girls across the Mexican border right after an ACORN-sponsored immigration parade???

• Philadelphia: Why did the Philly office go into damage control mode as soon as the Baltimore story first broke? What do they have to hide?

I would hate to be known as the journalist who never saw the bigger picture, lacked the creativity and ambition to approach a story from a fresh perspective, and contributed to the apathy of an entire nation. And I honestly, from the bottom of my heart, think every wannabe and professional journalist has the same attitude.

So why aren’t they behaving accordingly? Fear? Comfort? A false sense of purpose?

I don’t know about the rest of the press corps but all of the above scenarios scream scandal to me. They'd be worthwhile news.