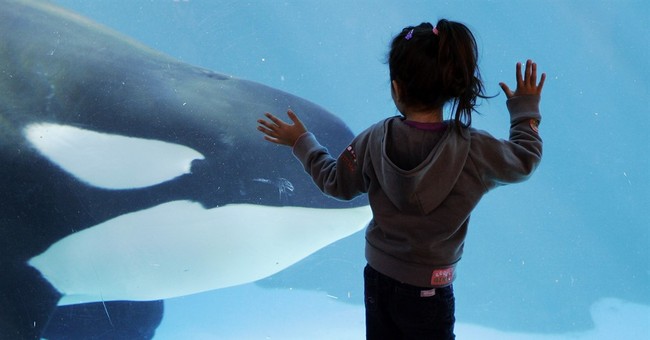 The whale should be the new symbol of government overreach. The California Coastal Commission has approved a project to expand Sea World in San Diego with the proviso that Sea World shall be prohibited from breeding at or acquiring whales for their San Diego facility. Yes, the California Coastal Commission, the new poster child for governmental overreach.

It is hard to get an image out of my mind. I envision a member of the California Coastal Commission visiting Sea World, diving into the whale tank and trying to keep two whales from mating. "Shamu, Namu, No means no! Marriage yes, but consummation thereof is not permitted. If you do not stop, I will have you arrested. You must forever be the virgin whales."

The mind boggles at the thought of whale contraception. The mind also boggles at the reality that the California Coastal Commission is effectively taking a position that is intellectually indefensible. They seem unconcerned with the other fish and mammals at Sea World. They take no notice that there are fish in Sea World aquariums that are quite small and to which they are condemned for life. Is there no equal protection under the law for fishes and other mammals? And what of the small aquariums in homes built near the ocean?

"This was not a power grab, the commission is not pre-empted by any federal law and no other state agency is addressing issues related to captive whales. We were faced with making our decision in a regulatory vacuum," stated California Coastal Commissioner Bochco. Of course, there is no regulatory vacuum. If the Federal or California elected legislatures wish to determine that there should be a ban on captive whale breeding, they can impose a legislative ban on captive whale breeding. This is actually the job of the legislature.

And this is the issue. Throughout virtually every Federal and state agency in the country, unelected officials have determined that if there is no law to the contrary, they can write regulations and impose limitations upon the actions of private citizens and businesses with virtually no limitation. There appears to be no concern whether the new regulations are within the authority or intent of their agency 's charge; these agencies want to use their power to achieve political goals far beyond their intended legislatively passed roles. It speaks to a sense of power over the people rather than a service in performance of their duties. There becomes no limit to the power of these unelected "commissars".

If the California Coastal Commission can keep whales from breeding, because of their and PETA's view of animal cruelty, is not the next logical step for the California Coastal Commission to take a stand against human over population. Yes, you may build your home on the coast, but you shall not have children, adopt children or care for your grandchildren within your new home. Isn't human over population more of a global issue than a handful of whales?

There is an overarching governmental issue which is not remotely limited to the California Coastal Commission. It is the overreaching activities by Federal, state and local governmental agencies throughout the country. The EPA wants to effectively take control over intra-state waterways and any water accumulation so much as a puddle. The Bureau of Land Management hired a small army to eliminate access to land used by ranchers for fifty years. The Department of Education is using the threat of funding to force certain programs upon local school districts.

The California Coastal Commission is not filling a regulatory vacuum; it is exploiting its power and undermining democracy. And it is not alone.