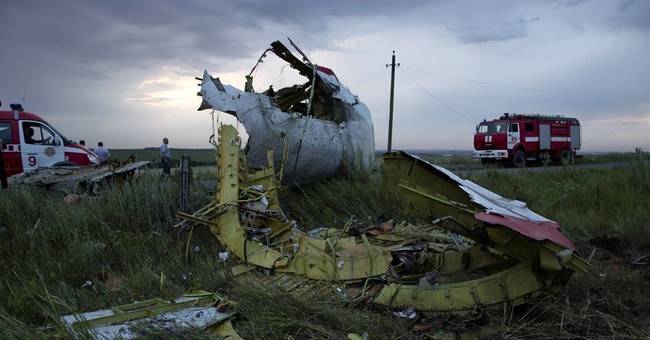 This week there was an exchange of classified and confidential e-mails between Russian leaders and our Administration. Ultimately, if necessary, the Administration will claim executive privilege over the e-mails that were immediately provided to the Internal Revenue Service for safekeeping. The e-mails have been leaked through a source currently resident in Moscow.

Russian: Look, we need some help. We are really sorry, and I mean that, but one of our guys thought that the Malaysian airplane was carrying Ukrainian troops. He is an idiot, our idiot, but yes, an idiot and trust me, we won't give him the keys to any more anti-aircraft missiles. But, you know, we cannot admit to anything here because we don't ever admit to doing anything wrong. We can't fire the guy and to be honest, the number of people who considered the risks of who should be able to control anti-aircraft missiles, should have known about this and maybe did know about this includes a few people who we just cannot have publically known. What should we be doing here?

U.S. Representative: Are you truly sorry?

Russian: Yes. We are ruthless to beat the band, but we certainly had no interest in killing three hundred innocent people. Our goal was and is to help our friends protect their turf, nothing more and nothing less.

U.S. Representative: OK, we deal with this all of the time.

Russian: Yes, I know, that is why I am calling.

U.S. Representative: OK, this is really pretty easy. You need to do three things: First, you need someone else to blame or a great story as to what "really happened". Second, you need a strategy to keep any investigation at bay. And third, you need a diversion to draw people's attention away from the problem after a few days.

Russian: You are my expert. Keep going.

U.S. Representative: Well, I think you need to find a way to have people conclude that the missile was fired by someone, you don't know who, but it was the result of the Ukrainian government sending false reports about their military air traffic. It is unimaginable that anyone would have desired to hurt innocent civilians from all over the world. And it would not hurt if you combined that with the release of reports of simultaneous military movements by the Ukrainian military intended to massacre innocent Russians in the Eastern Ukraine. That should at least get the ball rolling that none of this would have taken place if the Ukrainian government were not so aggressive.

Russian: You guys are good, but what about the investigations?

U.S. Representative: We are masters on this. First, your Secretary of State must express outrage and indicate that you are one hundred percent committed to a full and completely transparent investigation. At that point, the Secretary of State must disappear from the conversation and your Justice Department equivalents must take control. If at all possible, your guy should get control of the airplane's black boxes and all other meaningful evidence. Your Justice leader should than go into the four corner offense.

U.S. Representative: An American expression. That means your guy must continue to tell everyone there is an on-going investigation and he cannot talk about an on-going investigation. If the United Nations or some equivalent begins demanding the information that you want to be unavailable, your President should respond by saying that the investigation has turned political, there is no evidence of any conspiracy and everyone needs to let the investigation take place. Based on our experience, that should buy you at least half a decade and at some point, almost everyone will lose interest.

Russian: Brilliant. And you mentioned a diversion.

U.S. Representative: You have to be careful here as you don't want your diversion to put more pressure on your President than the current problem. We have not been so good at that. Given what we are going through, I would suggest not focusing on your borders, healthcare or your tax service. You can pick something; my suggestion would be maybe some fracas with North Korea. They are scared to death of you and you can control the outcome.

Russian: Wow, you are the best! Talk to you soon.

U.S. Representative: My friend, remember, you must be totally offended if your motives are challenged for having a complete investigation finished before you talk about this issue. Anyone who wants to force the subject is only doing it for political reasons.