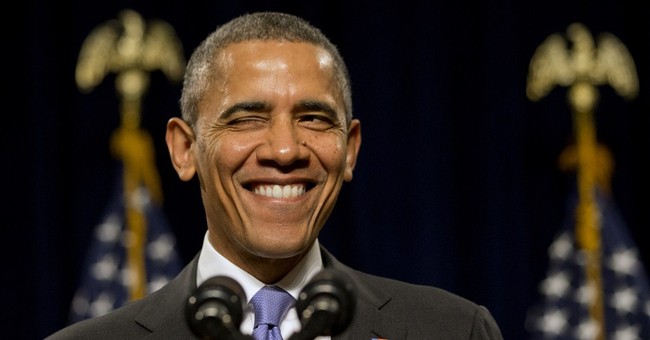 The President has reached "You have to be kidding!" stage of executive orders. The latest executive order with respect to Obamacare, as summarized in the Treasury Department 'Fact Sheet', provides:

While the employer responsibility provisions will generally apply starting in 2015, they will not apply until 2016 to employers with at least 50 but fewer than 100 full-time employees if the employer provides an appropriate certification described in the rules.*

* Those that claim the exemption for 2015 will need to certify under penalty of perjury that they did not reduce their workforce to fewer than 100 employees in order to qualify.

Nothing about this executive order passes constitutional muster:

· Executive orders cannot change one hundred years of court decisions allowing (or in fact encouraging) taxpayers to plan their activities under the tax law to create the lowest possible tax.

There exists no mention in the Section 4980H of the Affordable Care Act, the section of the law that provides small business exemptions from the Obamacare insurance requirements, for an employer group of 50 to 99 employees. There specifically exists an exemption for employers who do not have 50 or more employees for "120 days or fewer". There is not a sentence, phrase, concept or inference of a third group of 50 to 99 employees. The determination that small business for the purpose of healthcare insurance was a specific and enumerated part of the law. President Obama is absolutely writing new law when he creates his own special category of employer size. The size of the small business unit exempted from the law is a decision made by Congress; it was not an alternative offered to the President. It is unconstitutional for a President to create his own law.

The concept that a taxpayer must certify that they did not reduce their workforce to fewer than 100 employees in order to qualify for the 2015 exemption from the insurance requirement has to have the constitutional law professors at the University of Chicago where President Obama was allowed to teach constitutional law hiding under their desks. Perhaps the two most famous quotes in the history of tax law in the United States belonged to Judge Learned Hand:

"Any one may so arrange his affairs that his taxes shall be as low as possible; he is not bound to choose that pattern which will best pay the Treasury; there is not even a patriotic duty to increase one's taxes."

"Over and over again courts have said that there is nothing sinister in so arranging one's affairs as to keep taxes as low as possible. Everybody does so, rich or poor; and all do right, for nobody owes any public duty to pay more than the law demands: taxes are enforced exactions, not voluntary contributions. To demand more in the name of morals is mere cant."

The very thought that a taxpayer must certify the reasons that they made a specific business decision flies in the face of almost one hundred years of tax law litigation. Essentially, the taxpayer must only comply with the express language of the law and not engage in a series of artificial steps to side-step a statute. The idea of a certification is not considered in the Affordable Care Act and is clearly unconstitutional. In reality, any challenge to a certification would be silly; the IRS does not have the mind melding techniques available from a Star Trek episode to enforce the laws of the United States of America.

Ignored in this piece is the equally unconstitutional executive order by the Obama Administration to change the employer mandate for large employers from 95% of employees to 70% for 2015 which ignores the, of course, unconstitutional executive order to move the enforcement date from 2014 to 2015. If a new president of any party did this with respect to legislation passed by a prior Congress and signed by a prior president, there would be calls for impeachment.

There are 156 Members of the House of Representatives and 55 Senators in the U.S. Congress who are lawyers. Not a single one of them does not know that the President has over-reached and is acting in an unconstitutional manner. Not a single member does not know that the historical precedent being set by this president is dangerous to the Republic. It is the job of a freely elected Congress to stop this abuse today regardless of whether they agree or disagree with the substance of the executive actions being promulgated by the President of the United States. While seemingly unnecessary because of the actions of the Supreme Court, the nation would be well served by specific and limiting codification of executive orders.