Gregory Wrightstone
|
Posted: Feb 12, 2019 12:01 AM
Share   Tweet
The opinions expressed by columnists are their own and do not necessarily represent the views of Townhall.com. 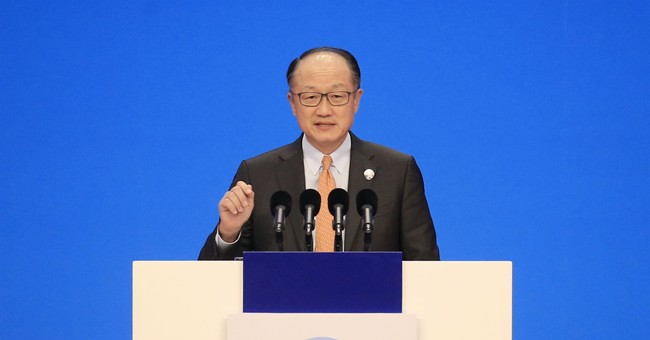 The American media has focused recently on the newly released Green New Deal (GND), a resolution sponsored by U.S. Rep. Alexandria Ocasio-Cortez and U.S. Sen. Ed Markey that would fundamentally transform America’s energy policy and move closer to their socialist vision for the country. As a resolution, the GND has no power to actually regulate or tax but gives left-leaning congressmen and potential presidential candidates a vehicle to virtue-signal their embrace of a radical, anti-fossil fuel agenda.

One day before the much-ballyhooed release of the GND, and flying mostly under the radar, President Trump made an announcement that could have more of an effect on green energy than the Cortez-Markey proposal — and in the opposite direction.

That was the president’s February 6 notice that he was nominating David Malpass to replace the outgoing World Bank president. Mr. Malpass, Treasury undersecretary for international affairs and former senior economic advisor for the Trump campaign, has been highly critical of the institution that he is now set to lead.

The current leader of the World Bank, Jim Yong Kim, made a surprise announcement in early February that he was leaving three years before the end of his second term. Kim left amid serious conflicts with the Trump administration over its decades-long trend toward investing in climate-change mitigation rather than in its original mission of reducing poverty. According to the World Bank, its dual mission is “ending extreme poverty and promoting shared prosperity.”

The World Bank justifies funding of projects such as large renewable energy initiatives  — detailed in their Climate Change Action Plan — with arguments that a shift away from fossil fuels benefits the poor through reduced air pollution. The bank states that it “joined the fight against climate change because it could push another 100 million people into poverty by 2030.” Their plan sets out “ambitious targets to be met by 2020, including helping client countries add 30 gigawatts of renewable energy.” In 2016 the bank announced it would spend 28% of investments on climate-related projects by 2020.

The transition away from strictly targeting extreme poverty to becoming a climate change warrior began under the Clinton administration when then-President James Wolfensohn began turning the institution into a green funding source. Under Obama appointee Kim, the bank prioritized the closing of developing countries' coal mines over lifting the least fortunate out of generational poverty.

The World Bank aims to help the poverty-stricken, but in truth, it will be the poor who will most feel the burden of the policies the bank endorses. Backing of agreements like the Paris Climate Accord will reduce the availability of inexpensive, reliable energy that can increase prosperity for billions of the poorest. Nearly a billion people do not have the benefit of electricity and another billion have very limited access to the energy standards we take for granted in the western world. In addition, the living standards of all peoples benefit from inexpensive, dependable energy from fossil fuels.

It is estimated that pollution from dirty, inefficient cooking and heating fuels, often dung, lead to about 4 million premature deaths a year. Policies such as that proposed by the World Bank condemn these unfortunates to more generations of poverty, disease and despair.

India is the world’s largest developing nation and the largest World Bank debtor. Under the leadership of Prime Minister Narendra Modi, India no longer borrows from the International Development Association arm of the bank, as it has embraced an “all of the above” energy policy to improve the lives of its 1.3 billion citizens. It is the third largest producer of coal in the world and plans to increase spending on coal and lignite mining by 20% in the coming year. Only by reliance on coal-fired electricity can India achieve their goals of country-wide electrification. Speaking about a report on the subject, an official of the power ministry said that “to meet the peak evening demand and manage supply in months when wind, solar and hydro generation is less, the study showed we will need fresh coal-based capacity,”

India’s energy mix has paid off for the people of India as only last week it was reported that the country was set to achieve nearly 100 per cent household electrification by the end of last month. Around 30,000 families were being provided a new electricity connection daily,

Reliable, inexpensive energy is part of the solution which can lift billions of the impoverished out of systemic poverty and disease.  Instead of promoting fruitless and harmful policies to control global temperature, the World Bank should embrace responsible investments that make energy and all its benefits more affordable, and thereby free the poor to rise out of poverty.