Gregory Rummo
|
Posted: Dec 21, 2020 12:01 AM
Share   Tweet
The opinions expressed by columnists are their own and do not necessarily represent the views of Townhall.com. 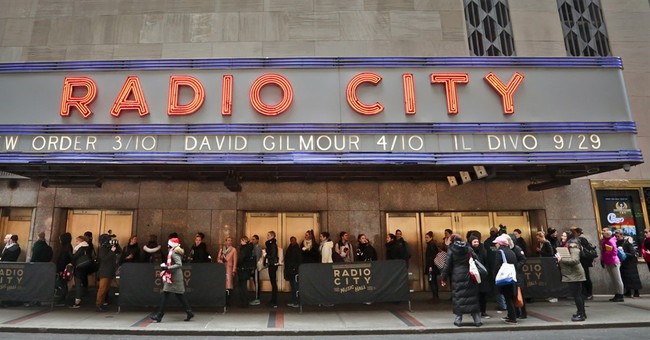 Fifty-eight years ago as a 7-year-old I remember my mother taking me to New York City to see the Christmas Spectacular at Radio City Music Hall. Back then it was a trek to get there from Westchester County, N.Y., especially for us since my dad used the car for work and mom didn’t have a driver’s license.

We would take advantage of a snow day in December to trudge into the city. We lived on the summit of Heights Drive in Yonkers, which was interesting for two reasons. Although our home was a mere half-mile from Route 100, the main thoroughfare to the Bronx via the Number 20 bus. To get there, we had to walk from our house down what was affectionately known as “Snake Hill,” a steep and sinuous road with no sidewalks.

And when I say steep, I mean steep. Directly across from our house was a park where there was a Geological Survey marker denoting it as the highest point in our town.

We’d leave early in the morning, slipping and sliding the half-mile down to catch the bus. We rode all the way to the last stop where “The El” — the elevated subway on Jerome Avenue in the Bronx — began.

From here I’m a little hazy about the rest of the trip, but I think we had to change trains at least once until finally emerging from underground at Rockefeller Center.

After eating lunch at The Automat, a relic of the past that dates me, we waited on what seemed like an interminably long line to purchase tickets for the show. There was no Internet back then and we suffered in the freezing cold outside until finally arriving at the ticket window.

Once inside I was awed as a child by the main hallway, the huge, crystal chandelier and the sweeping stairway carpeted in red with its brass handrails leading to the first mezzanine. The magic continued upon entering the theater itself; the immense size of the stage and vaulted ceiling took my breath away.

When the pipe organs began to play, I was in heaven.

Fifty-eight years later, I repeated the journey with my wife and three of my children. We had already purchased tickets well in advance through the Internet. We drove to the city on a relatively mild afternoon. It was a comfortable ride of a mere hour, shocking for a Friday close to rush hour. We parked a few blocks from Times Square and since we had arrived early, we walked along Broadway, taking in the sights and sounds until arriving for dinner at the Hard Rock Café.

After dinner, we retraced our steps north for several blocks and then walked on over to Radio City for the show. There was virtually no line for ticket holders and we entered the building almost immediately.

It was as if I had gone back in time. The main hall, the chandelier, the sweeping staircase, the brass handrails — they jogged areas of my memory that had not been awakened for half a century.

We took our seats and waited until the two pipe organs emerged from the walls on either side of that massive stage. Walls resonating, the air was filled with the sonorous strains of Christmas carols.

The show featured the Rockettes, of course, and this year being the 85th anniversary of the Christmas Spectacular, a retrospective about the dancer’s costumes was included.

What was markedly different were the two segments in 3D (glasses were supplied at all the entrances to the main theater).

But what had not changed over the years was the grand finale.

A woman, sitting with her child, read a portion from one of the Gospel accounts of Christ’s birth, which was followed by a procession across the stage of shepherds, wise men, other folk and three camels.

It all culminated in a live nativity scene.

Everyone stood to their feet applauding not just for the great show, but for the reminder of the good news for all people: “Today in the town of David a Savior has been born to you; he is Christ the Lord.”

Mom is long gone but the spirit of her sacrifice to take this little boy to Radio City endures as one of her gifts to me this Christmas.

Gregory J. Rummo is a Lecturer of Chemistry at Palm Beach Atlantic University and a Contributing Writer for The Cornwall Alliance for the Stewardship of Creation.