SuckedIn or LinkedIn? - Investing for Idiots

Thursday’s Initial Public Offering of social media firm LinkedIn, Corp. (LNKD) provided the financial media and investors with a lot of hype and excitement in what has been an otherwise choppy and non-descript general market environment.

As we watched LNKD’s share price convulse on Thursday as the opposing forces of greed and fear pushed the stock back and forth, as we can see on the 15-minute interval intra-day candlestick chart of LNKD, below, it became clear that trying to buy the stock within a day or two of its over-hyped IPO amounted to little more than throwing darts at a rapidly moving target.

If you were lucky enough to get shares on the IPO at $45 each, then you probably felt very “linked-in” to the profit side of the LNKD mania on Thursday.

However, if you were one of the unlucky dart-throwers who bought shares on Thursday at $120, right now you are feeling quite “sucked-in” to LinkedIn and may not share the expression of ebullience that most commentators are trying to paint on the faces of LNKD shareholders currently.

In our view, investors are better off leaving the hype and ebullience to others as they simply let the market sort things out for them in the near-term. 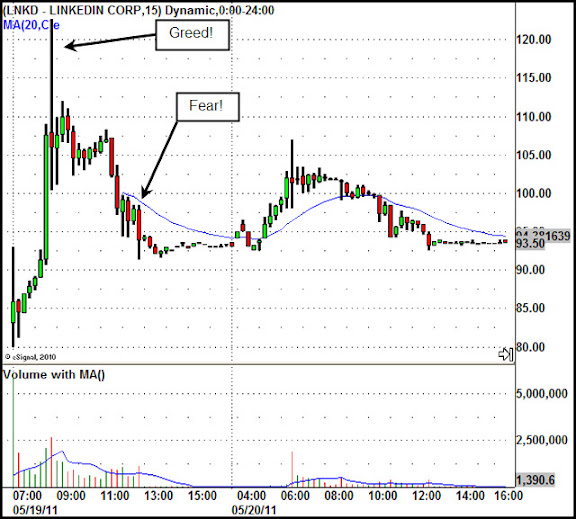 The most constructive aspect to the LNKD IPO, in our view, is that now this entire phenomenon of “social media” and the economic and business opportunities for profit that it may present for investors going forward is able to be priced within the context of an auction-based stock market.

The “market mind,” in other words the sum total of buy and sell decisions made by investors using their own real money and their best knowledge and information is reflected in the prices of stocks over time.

Thus, allowing the “market mind” some time to settle upon and determine a reasonable price for LNKD is the best course of action for those interested in purchasing shares in this nascent social media company.

If the LNKD story is nothing more than hype and mirrors, the stock price will soon reflect that, but if the stock is able to settle down here and build a constructive sideways consolidation within a coherent price range then investors should be able to determine a low-risk entry point instead of letting their greed draw them into the fray too soon.

Stock market history provides a very useful guide with respect to how patient and rational investors should approach such a widely-anticipated IPO like LinkedIn Corp. Let’s look back at the last big internet-based company to come public in a deal as big and as hyped-up as LNKD’s, Google, Inc. (GOOG), which we show on a weekly chart back during the period of 2004-2006.

In our studies of market history as it relates to hot-IPOs, the best ones will tend to settled down and build a sideways consolidation or “base” as the “market mind” begins to assess the company’s true business prospects. In 2004, GOOG came public at $85 a share on the Initial Public Offering and immediately drew criticism for being “overhyped” and “overvalued” when it began trading over $100 on the first day of trading. 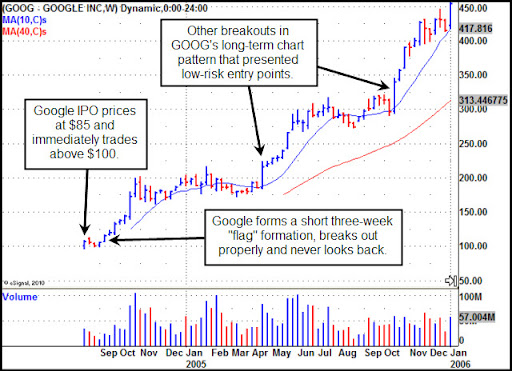 Back in 2004, however, investors could simply ignore all the hype and criticism and just watch the stock. GOOG moved above the $100 price level on the first day of trading and then moved very tightly sideways for the next three weeks in what technical analysts would call a “tight flag formation.”

Four weeks after the first week of trading GOOG broke out from this tight flag formation on increasing trading volume to all-time price highs and has never looked back since.

The lesson of GOOG is that as with all legitimately hot IPOs, the market will present patient and prudent investors with a low-risk entry point in the stock as it emerges from its first proper consolidation as the “market mind” begins to assess the company’s prospects.

Once this occurs and the stock spends a little time consolidating in a sideways move, the market mind will then signal a re-assessment of its initial assessment of the stock when the stock breaks out from such a consolidation heavy trade.

At that exact point investors now have a low-risk entry point on the breakout, with clearly definable and discernible areas of support and resistance.

Notice also that GOOG presented investors in the stock with other low-risk buy points as the stock broke out of other sideways consolidations on the way up in April and October 2005.

So the lessons of stock market history when it comes to hot IPOs are clear: Wait for the stock to form a discernible sideways consolidation and then seek to buy the stock as it begins to emerge from such a consolidation on heavy trading volume as buyers move into the stock in force.

In this manner one can play a hot IPO like LinkedIn in a methodical low-risk manner, avoiding the dangers of getting “SuckedIn” instead.

For daily market commentary visit Ransom and Friends at the Ticker