Gil Gutknecht
|
Posted: Oct 07, 2018 12:01 AM
Share   Tweet
The opinions expressed by columnists are their own and do not necessarily represent the views of Townhall.com. 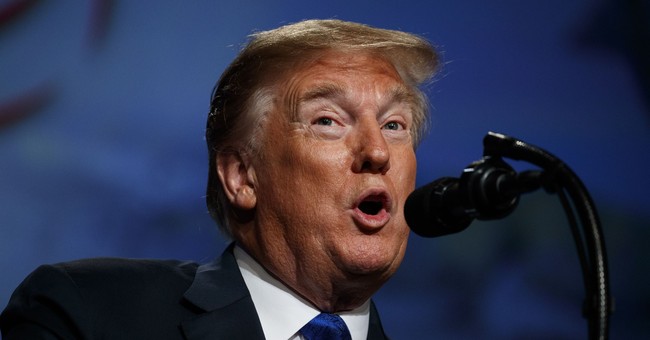 The place was rocking. The energy inside the Mayo Civic Auditorium equaled that only found when the U of M Gophers play hockey against the UMD Bulldogs in Duluth. It’s an energy that cannot be fully explained, but you can actually feel it.

The family sitting next to us had driven five hours from Brainerd. Another fellow had flown in from California, just to attend a political rally. But it wasn’t just a political rally. It was a cross between a religious tent revival and a rock concert. The attendees were a cross section of America. Sitting three rows in front of us was a very recognizable business leader wearing an expensive blue suit. Two community college students stood in line with us sporting much more modest student attire. Contrary to some media reports, the makeup of the audience matched the ethnic makeup of Southern Minnesota.

There were a few protesters outside. But, they were dwarfed by the thousands of Trump supporters who couldn’t get in.

When the President strode slowly to the podium, the roar was deafening. My wife and I weren’t alone in wishing we had brought ear plugs. He took the time to look and wave to every section in the hall, expressing his appreciation for their attendance. It was more than mutual.

There was a TelePrompTer, but he didn’t need it. Both he and the audience knew what he was going to say. And they lapped it up like thick cream. There was the obligatory dig at the Fake News section. The crowd roared.  He talked about his administration’s accomplishments in the last twenty months. There were many and each received thankful applause.

He dropped the gloves and tore into the Democrats with bare knuckles. Sensing that he now had them against the boards over their embarrassing treatment of Judge Kavanaugh, he held nothing back. The crowd was in the palm of his hands. He called the Democrats the party of crime for their open borders plans. Their foolhardy policies would only guarantee more drugs and violent criminals coming into our neighborhoods. That hit a nerve here where the Democratic Candidate for Governor has called for making Minnesota into a Sanctuary State. Trump apparently knew it.

The crowd fed off him and he off them. It was a spectacle to behold.

So why would people travel long distances to stand in lines on a cold, rainy Minnesota evening to participate in a rally like this? To listen to a speech that they had pretty much heard before?

The answer became clear watching the crowd dynamics that night. Donald J. Trump didn’t create his supporters. They found him. They had been looking for someone like him to come along for decades. And here he was, in the flesh. He was here in their area. They were not going to miss this for the world. It wasn’t so much to hear a speech, in reality it was their chance to say thank you. They were there to express their appreciation to someone who had the courage to speak up and fight for things they had wanted for a very long time.

They had been ignored and maligned for years.

Here was a man who didn’t need to take on the job. A man with a beautiful wife and family. He offered himself up to take on the great issues of our time. To absorb the withering fire from the angry Left. To spit in the eye of the name calling thought police. To shake things up and kick over some tables in the swamp. To say what needed to be said and do the things that had been swept under the rug for far too long.

Here was their champion. The man who understands them. The man who has given them voice. Someone who at long last understood that a President’s job is to defend American interests first. People who have been waiting decades for such a man have no problem waiting for hours in the cold and damp.

They know that he is imperfect. That he is not a particularly polished public speaker. The Left and their fellow travelers in the media will never understand the Trump phenomenon. Maybe that is a good thing.

The Trump effect is real. Elections are about turnout, especially midterms. Energy drives turnout. As President Trump strides from one victory to the next, it’s hard to imagine that the energy manifested in that auditorium the other night will not translate into Republican victories November 6th.