Gil Gutknecht
|
Posted: Jun 10, 2018 12:01 AM
Share   Tweet
The opinions expressed by columnists are their own and do not necessarily represent the views of Townhall.com. 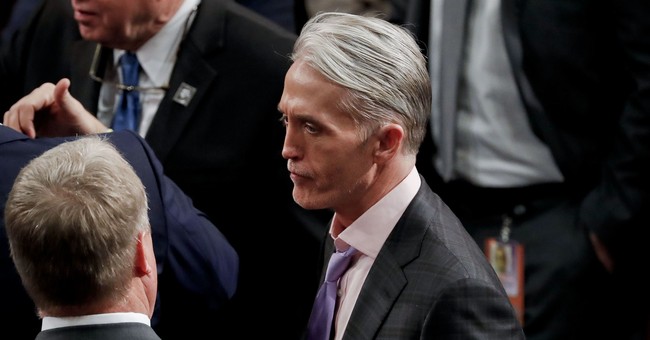 “All lies and jests. Still a man hears what he wants to hear and he disregards the rest. Lie, lie, la lie…”

So wrote poet, songwriter Paul Simon. Simon uses the story of an aging boxer to remind us of how the mistakes and choices we’ve made during our lives leave scars.  Perhaps it was just a coincidence that he used the word lie repeatedly in the piece. Perhaps not. We are all carry the reminders of every glove that laid us down or cut us. Some of the deepest cuts I’ve received were a direct result from my naïve acceptance on face value of what turned out to be clever lies.

Representaive Trey Gowdy is one of the smartest, most principled members of the U.S. House. So we sat dumbstruck as he told us that our FBI and Justice Department had done exactly what we citizens would have wanted them to do. He had been briefed by Mr. Rosenstein. Chairman Nunes received the same briefing and was mum for more than a week. The combination caused some of us to question our conclusions. Senator Rubio joined the “nothing to see here” chorus. Maybe there was actually something that we had missed. Maybe we were wrong about the lies, leaks and spying by Brennan, Comey, Lynch et al.

Over the weekend, Rep. Nunes broke his silence. He reminded us of several things. First, Rep. Gowdy stressed that they were told that Mr. Trump was not and is not a target of the investigation. That the President had told former FBI Director that if there were bad actors in his tent, he wanted Comey to get to the facts. So, he concluded that the FBI was only carrying out the orders of the newly elected President. Nunes also indirectly reminded us that because of his earlier career as an Assistant U.S. Attorney, Gowdy wants to believe that the kinds of abuse we suspect just could not happen. Chairman Nunes confirmed that they were given a briefing, but no supporting documents. He clearly remains a skeptic and rattled off several questions that the briefing didn’t answer. The biggest of which is of course, why are they withholding 40,000 documents that have been legitimately subpoenaed? Perhaps I missed it, but I don’t believe anyone has asked Trey Gowdy that question yet.

There are still lots of questions that the briefing apparently didn’t answer. Like, how and why McCabe and others were drafting exoneration statements long before key witnesses in the Hillary investigations were completed? Why were members of her inner circle allowed to sit in on questioning sessions and treated as legal counsel instead of potential witnesses or persons of interest? When and why did the FBI open the investigation now known as Operation Crossfire Hurricane? When and why did they retain a human source (spy) in England to imbed and entrap Trump team members? When did they inform FISA court judges that the central tenant for the requests for surveillance approval was a dossier that was both uncorroborated and financed by political opponents of Mr. Trump? If they were simply trying to protect Mr. Trump, why didn’t they warn him of the dangers posed by those rascally Russians? How could they be so certain that it was the Russians who breached the DNC servers if the FBI never examined them? Why didn’t they? Wasn’t it possible that the DNC hack was an inside job? Perhaps by the Pakistani who was employed by the former DNC Chair? Remember, the one who had access to the House servers and probably the DNC servers as well? The one who was allowed to flee to Pakistan, without so much as a by your leave? Finally, if Mr. Trump is not a target, what exactly is the scope and purpose of the Mueller investigation?

Trey Gowdy is a lot smarter than I am. He worked for the Justice Department and with the FBI. He has enormous respect for them and understandably wants to believe that they couldn’t possibly go so far astray. He and I share the desire to hear what we want to hear. I want to hear more answers and to see the documentation to support those answers. I will happily disregard the rest.