Gerard Scimeca
|
Posted: Jul 15, 2019 2:03 PM
Share   Tweet
The opinions expressed by columnists are their own and do not necessarily represent the views of Townhall.com. 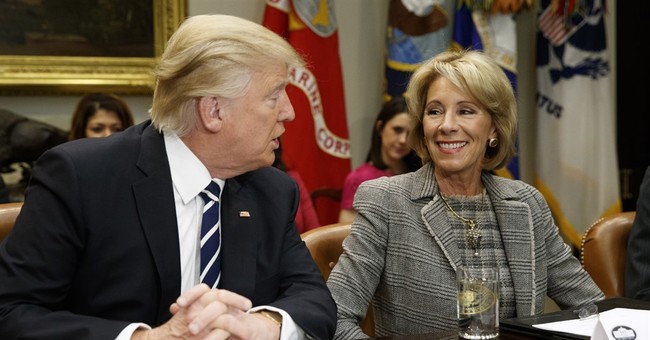 President Trump schooled Democrats once again last month with the announcement by his Education Secretary, Betsy DeVos, that the Obama-era Gainful Employment Rule (GER) is being scrapped.  The decision was made late on a Friday, likely to minimize the Democrats’ ability to fill the news cycle with declarations of outrage and contrived exasperations on behalf of ‘students.’  Of course the howls of protest are sure to continue, and Democrats will do their very best to mislead the public both on the GER and Trump’s overall agenda of education reform.

Like nearly all of Obama’s regulatory actions, the GER was a massive overreach by the federal government, this time into higher education, giving the federal government broad powers to regulate for-profit colleges based on the future income of their students. Just as Obama did with healthcare, energy, and financial services, his administration introduced countless rules into the education bureaucracy to hamstring career-oriented colleges and coddle the elite (i.e., taxpayer funded) education establishment. The cornerstone to that citadel of perpetual federal domination was the GER, which Trump and DeVos thankfully dispatched in order to sever the bureaucratic tentacles put in place by their predecessors.

The GER was an outrageous concept, empowering federal bureaucrats to decide whether a degree earned at a career-oriented college was sufficient or required federal intervention. Students studying to become a chef, a mechanic, a groundskeeper, or any other profession, were subject to regulations that could lead their student loan funding being reduced or pulled altogether. Other bureaucratic remedies could include changes to the college’s curriculum or work-study requirements. Through the magic of the GER, a literal bureaucrat sitting in Washington suddenly becomes both a guidance counselor for student curricula and job-skills advisor dictating a career path. And you thought your parents meddled too much in your college decision?

As anyone can see, this wasn’t a policy but a pretext, giving government employees with meaningless statistics and a red pen the power to control the career paths of students they don’t know and industries they don’t understand. How can anyone in Washington determine what the earning potential of a chef will be in five years? A person with a degree in culinary arts, as one example, can follow countless career paths to apply that degree, in countless locations. The same can be said for nearly any profession. Earnings are determined by dozens of personal and demographic factors and can change rapidly in an evolving economy. Levels of skill, aptitude and other resources a student may access are also influential in determining income and well beyond the capacity of the “job police” to calculate.

The most obvious clue that the GER was a canard completely unrelated to concerns regarding student welfare were that it does not apply to the vast majority of student aid that goes to public and private non-profit colleges and our nation’s current $1.5 trillion in student loan debt.

There is no GER that applies to any degree from State U, no bureaucrat ruling that a degree in philosophy, social work, or gender justice can’t justify a government loan. There is no scrutiny whether a double major in French and cat literature will lead to “gainful employment.”

With Democrats now out of power in the executive branch it is abundantly clear the GER was nothing more than another vehicle by which to torpedo the for-profit colleges that they detest purely on ideological grounds. Since Trump’s election, liberal lawmakers have tried every sideways tactic to undermine these universities, from calling on the IRS to scrutinize their finances, to urging the Veterans Administration to blacklist them, and now through legislative proposals to cut off veterans’ ability to use their GI Bill funding for tuition.

By canceling the GER, Trump struck a blow in support of education choice and vocational freedom for the hundreds of thousands of students every year who don’t or can’t follow the traditional four-year college template. Unlike the Democrats and their commitment to the government-controlled education establishment, Trump is the only one showing concern for the needs of unique students such as parents, working adults, low-income students and veterans, who make up a large proportion of those seeking opportunity in the vastly more innovative for-profit sector. Trump and DeVos deserve praise for moving forward on a “more freedom” agenda of education, and it’s a great sign they expelled the gainful employment rule from class.

Wait...So the FBI Lied About the Ending of the Texas Synagogue Hostage Situation
Townhall
Looks like it's up to Zaid Jilani and Christina Pushaw to debunk AP hit piece on Ron DeSantis suggesting he wants to 'shield whites from 'discomfort''
Twitchy
The Latest Polling Will Have Democrats Waking up in Cold Sweats
Redstate
The Left Calls for Tossing NBC's Chuck Todd Off Nakatomi Plaza Again
PJ Media