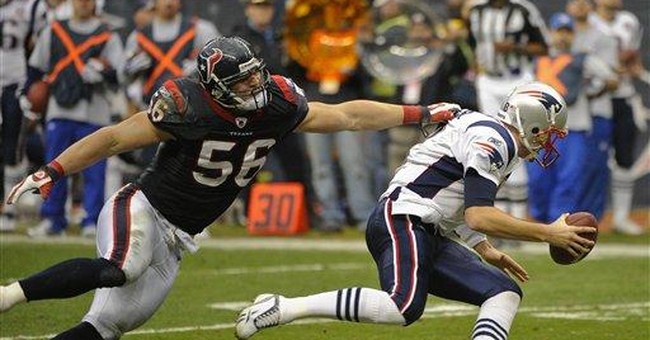 WASHINGTON -- In 1957, Queen Elizabeth, attending a Maryland-North Carolina football game, asked Maryland's governor, "Where do you get all those enormous players?" He replied, "Your majesty, that's a very embarrassing question."

Thursday night's championship game between Alabama and Texas, featuring head coaches paid $4 million and $5.1 million, respectively, will be an occasion for more hand-wringing about the "commercialization" of college football. That is a hardy perennial.

The 1920s, which worshiped stars like Red Grange and coaches like Knute Rockne, saw a boom in construction of capacious stadiums. SMU built its stadium 13 years before it built its library. The decade ended with a 1929 Carnegie Foundation report ineffectually deploring the "corruption" of grafting this lucrative entertainment industry onto academia.

From its founding in 1906, the NCAA opposed universities compensating students for athletic skills. Payments by boosters to players seemed less disreputable. The NCAA's so-called Sanity Code of 1948 said "no athlete shall be deprived of financial aids ... because of failure to participate in intercollegiate athletics."

In 1956, however, the NCAA dealt with the charge of "professionalism" -- many brawny boys were being unofficially paid to play -- by sort of legalizing that sin with athletic scholarships. In 1972 and 1973, the NCAA made freshmen eligible for varsity competition and relaxed requirements for high school academic achievement. And in 1973, the NCAA authorized one-year scholarships, renewable at the discretion of coaches.

This was partly to strengthen coaches in dealing with the new assertiveness of athletes, especially African-Americans. But it also amounted to a forthright embrace of the fact that "football has functioned as a kind of public theater since it was first discovered by the mass-circulation newspapers in New York in the 1880s."

So says Michael Oriard -- former Notre Dame and NFL player, now professor of English at Oregon State -- in "Bowled Over," his history of big-time college football since the 1960s. Universities hoped, he says, that the idea of athletic scholarships would immunize them -- it has -- against legal claims to workers' compensation for injuries.

Forty percent of Division I football programs lose money, but the rich are prospering, thanks to corporate branding of stadiums and bowl games, contracts with soft drink and athletic shoe companies, marketing of team logo merchandise, luxury suites, seat licenses for the privilege of buying seats and, most important, television.

There is now a 15-year, $3 billion television contract between the Southeastern Conference, which has six of the nation's 15 largest athletic budgets, and CBS and ESPN. This will give each of the 12 SEC athletic departments about $17 million a year, comparable to revenue from a major bowl game.

Most of the money that flows into big-time football programs from individuals and corporations is tax deductible for the spenders, and the universities' athletic programs are not taxed. Congress, however ravenous for revenues, will not dare to change this.

Evidence that football serves larger university interests (more and better student applications, alumni and government support) is elusive, but belief in football as an institution-building enterprise is not new: When the University of Chicago opened in 1892, it hired a former Yale All-American, Amos Alonzo Stagg, at a full professor's salary to coach the team. Football is one reason Notre Dame, rather than a rival, became the premier Catholic university in the 1920s and '30s.

Football, says Oriard, is "the chief activity through which alumni remain attached to their university," which matters more as states' budgets contract. Furthermore, Oriard says football provides large universities "meaningful ritual" and a sense of community "whose social benefit is hard to measure but nonetheless is real and powerful."

If boosters stop donating to football, they will not start donating to classics departments. The late Bear Bryant, Alabama's coach, correctly said, "It's kind of hard to rally 'round a math class." So a droll University of Oklahoma president was not quite kidding when he said, "We're trying to build a university our football team can be proud of." The wit who said football has about as much to do with education as bullfighting has to do with agriculture was more amusing than accurate.