A Picture Can Lie 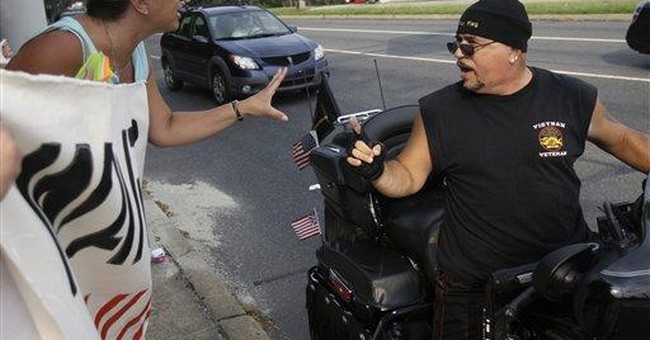 NEW YORK -- The 20th century was 100 years of amplitude. It overflowed with barbarous fighting faiths, wars enveloping continents, and graphic journalism assaulting global audiences with scenes of shocking immediacy. The Spanish Civil War, although small in terms of the number of combatants, was perhaps the century's emblematic conflict. As a rehearsal for the Second World War, Spain's agony became a proxy struggle between fascism and communism, with democracy crushed in the middle. And for perhaps the first time, pictures supplemented and sometimes supplanted words as primary shapers of opinion about a conflict.

According to Robert Hughes, author of "The Shock of the New" (1980), during World War I's nation-shattering and culture-shredding carnage, no photograph of a dead soldier appeared in a German, French or British newspaper. But the Sept. 23, 1936, issue of the French magazine Vu published (as did Life magazine 10 months later) what became perhaps the century's iconic photograph -- "Falling Soldier." It was taken by, and launched the remarkable career of, a 22-year-old Hungarian refugee from fascism, photographer Robert Capa.

It supposedly shows a single figure, a loyalist -- that is, anti-fascist -- soldier, at the instant of death from a bullet fired by one of Franco's soldiers. The soldier is falling backward on a hillside, arms outstretched, his rifle being flung from his right hand. This was, surely, stunning testimony to photography's consciousness-raising and history-shaping truth-telling, the camera's indisputable accuracy, its irreducibly factual rendering of reality, its refutation of epistemological pessimism about achieving certainty based on what our eyes tell us.

Probably not. A dispute that has flared intermittently for more than 30 years has been fueled afresh, and perhaps settled, by a Spanish professor who has established that the photo could not have been taken when and where it reportedly was -- Sept. 5, 1936, near Cerro Muriano.

The photo was taken about 35 miles from there. The precise place has been determined by identifying the mountain range in the photo's background. The professor says there was no fighting near there at that time, and concludes that Capa staged the photo.

Could an alternative explanation be that a single fascist sniper fired the fatal shot while some loyalists were at rest? No. What was once thought to be blood spurting from the falling soldier's skull is actually a tassel on his cap. And Capa several times said the soldier was felled by machine-gun fire. In a slightly less dramatic photo of another falling soldier, taken by Capa at the same time -- the cloud configuration is the same as in "Falling Soldier" -- the soldier falls on the same spot.

In 1995, the controversy seemed to have been settled in Capa's favor when the fallen soldier supposedly was identified as Federico Borrell Garcia, an anarchist militiaman. But a 2007 Spanish documentary included a written eyewitness account of Borrell dying many miles away, behind a tree. There are no trees in the many pictures Capa took when he took "Falling Soldier."

The coolly analytic professionals at the International Center of Photography in midtown Manhattan, which has the Capa archives, are commendably dispassionate about the "Falling Soldier" controversy. They also avoid postmodern mush, such as: All photographs are manipulative fabrications because the photographer chooses to point the camera here and not there, and, anyway, "Falling Soldier" is "basically" truthful because it illustrates the "essential truth" about war.

Capa was a man of the left and "Falling Soldier" helped to alarm the world about fascism rampant. But noble purposes do not validate misrepresentations. Richard Whelan, Capa's biographer, calls it "trivializing" to insist on knowing whether this photo actually shows a soldier mortally wounded. Whelan says "the picture's greatness actually lies in its symbolic implications, not in its literal accuracy."

Rubbish. The picture's greatness evaporates if its veracity is fictitious. To argue otherwise is to endorse high-minded duplicity -- and to trivialize Capa, who saw a surfeit of 20th-century war and neither flinched from its horrors nor retreated into an "I am a camera" detachment. As a warning about well-meaning falsifications of history, "Falling Soldier" matters because Capa probably fabricated reality to serve what he called "concerned photography." But this, too, matters:

There was the integrity of constant bravery in Capa's life, which was a headlong rush toward danger. He arrived on Omaha Beach with the first soldiers early on June 6, 1944, and was only 40 in 1954 when, on the move with French troops in Vietnam, he stepped on a land mine.