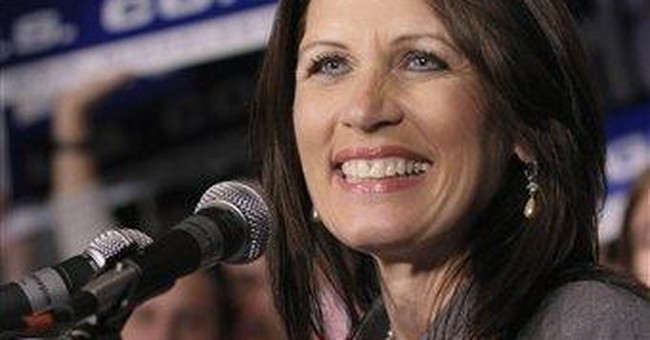 WASHINGTON -- When Marcus Bachmann came home that Saturday evening in 2000 he checked the telephone answering machine and was mystified by the many messages congratulating his wife for something. "Michele," he said, "do you have something to tell me?" She did.

The state senator from her district in suburban Minneapolis-St. Paul had been in office for 17 years, had stopped being pro-life and started supporting tax increases, so that morning she had skipped washing her hair, put on jeans and a tattered sweatshirt and went to the local Republican nominating caucus to ask him a few pointed questions. There, on the spur of the moment, some similarly disgruntled conservatives suggested that she unseat the incumbent. After she made a five-minute speech "on freedom," the caucus emphatically endorsed her and she handily won the subsequent primary.

After six years in the state Legislature, she ran for Congress and now, in her second term, has become such a burr under Democrats' saddles that recently The New York Times profiled her beneath a Page One headline: "GOP Has a Lightning Rod, And Her Name Is Not Palin." She is, however, a petite pistol that occasionally goes off half-cocked.

For example, appearing on MSNBC's "Hardball" 18 days before last year's election, she made the mistake of taking Chris Matthews' bait and speculating about whether Barack Obama and some other Democrats have "anti-American" views. In the ensuing uproar -- fueled by people who were not comparably scandalized when George W. Bush was sulfurously vilified -- her opponent raised nearly $2 million and her lead shrank from 13 points to her winning margin of 3.

Some of her supposed excesses are, however, not merely defensible, they are admirable. For example, her June 9 statement on the House floor in which she spoke of "gangster government" has been viewed on the Internet about 2 million times. She noted that, during the federal takeover of General Motors, a Democratic senator and one of her Democratic House colleagues each successfully intervened with GM to save a constituent's dealership from forced closure. One of her constituents, whose dealership had been in the family for 90 years, told her that the $15 million dealership had been rendered worthless overnight and, Bachmann said, "GM is demanding that she hand over her customer list," probably to give it to surviving GM dealerships that once were competitors.

In her statement, Bachmann repeatedly called such politicization of the allocation of economic rewards "gangster government." And she repeatedly noted that the phrase was used by a respected political analyst, Michael Barone, author of The Almanac of American Politics, who coined it in connection with the mugging of GM bondholders in the politicized bankruptcy. Bachmann, like Barone, was accurate.

Because Walter Mondale was saved by 3,761 Minnesota voters from losing his home state to Ronald Reagan in 1984, it is the only state to have voted Democratic in nine consecutive presidential elections. Minnesota is a blue state, but is given to idiosyncratic political flings. Minnesotans, Bachmann says, like "authentic" people of whatever political inclinations, from the cerebral Eugene McCarthy to the visceral Jesse Ventura.

Bachmann, an authentic representative of the Republican base, had quite enough on her plate before politics. She and Marcus, a clinical psychologist, were raising their children -- they had four then; they have five now -- and, as foster parents, were raising some other people's children, 23 of them, a few teenagers at a time.

Born in Iowa but a Minnesotan by age 12, Bachmann acquired what she calls "her family's Hubert Humphrey knee-jerk liberalism." She and her husband danced at Jimmy Carter's inauguration. Shortly thereafter, however, she was riding on a train and reading Gore Vidal's novel "Burr," which is suffused with that author's jaundiced view of America. "I set the book down on my lap, looked out the window and thought: That's not the America I know." She volunteered for Reagan in 1980.

Looking toward 2012, she is not drawn merely to Sarah Palin or other darlings of social conservatives. She certainly is one of those, but she knows that economic hardship and government elephantiasis now trump other issues.

When she was a teenager in Anoka, Minn., she was a nanny for a young girl named Gretchen Carlson. Today, Carlson, a Stanford honors graduate who studied at Oxford, is a host of "Fox & Friends," the morning show on -- wouldn't you know -- Fox News Channel. See how far ahead the Vast Right-Wing Conspiracy plans?