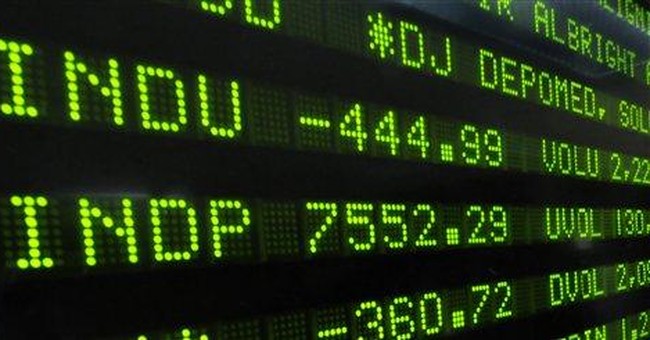 WASHINGTON -- Early in what became the Great Depression, John Maynard Keynes was asked if anything similar had ever happened. "Yes," he replied, "it was called the Dark Ages and it lasted 400 years." It did take 25 years, until November 1954, for the Dow to return to the peak it reached in September 1929. So caution is sensible concerning calls for a new New Deal.

The assumption is that the New Deal vanquished the Depression. Intelligent, informed people differ about why the Depression lasted so long. But people whose recipe for recovery today is another New Deal should remember that America's biggest industrial collapse occurred in 1937, eight years after the 1929 stock market crash and nearly five years into the New Deal. In 1939, after a decade of frantic federal spending -- President Herbert Hoover increased it more than 50 percent between 1929 and the inauguration of Franklin Roosevelt -- unemployment was 17.2 percent.

"I say after eight years of this administration we have just as much unemployment as when we started," lamented Henry Morgenthau, FDR's Treasury secretary. Unemployment declined when America began selling materials to nations engaged in a war America would soon join.

In "The Forgotten Man: A New History of the Great Depression," Amity Shlaes of the Council on Foreign Relations and Bloomberg News argues that government policies, beyond the Federal Reserve's tight money, deepened and prolonged the Depression. The policies included encouraging strong unions and wages higher than lagging productivity justified, on the theory that workers' spending would be stimulative. Instead, corporate profits -- prerequisites for job-creating investments -- were excessively drained into labor expenses that left many workers priced out of the market.

In a 2004 paper, Harold L. Cole of UCLA and Lee E. Ohanian of UCLA and the Federal Reserve Bank of Minneapolis argued that the Depression would have ended in 1936, rather than in 1943, were it not for policies that magnified the power of labor and encouraged the cartelization of industries. These policies expressed the New Deal premise that the Depression was caused by excessive competition that first reduced prices and wages, and then employment and consumer demand. In a forthcoming paper, Ohanian argues that "much of the depth of the Depression" is explained by Hoover's policy -- a precursor of the New Deal mentality -- of pressuring businesses to keep nominal wages fixed.

"By acting without rhyme or reason, politicians have destroyed the rules of the game. There is no reason to invest, no reason to take risk, no reason to be prudent, no reason to look for buyers if your firm is failing. Everything is up in the air and as a result, the only prudent policy is to wait and see what the government will do next. The frenetic efforts of FDR had the same impact: Net investment was negative through much of the 1930s."

Barack Obama says the next stimulus should deliver a "jolt." His adviser Austan Goolsbee says it must be big enough to "startle the thing into submission." Their theory is that the crisis is largely psychological, requiring shock treatment. But shocks from government have been plentiful.

Unfortunately, one thing government can do quickly and efficiently -- distribute checks -- could fail to stimulate because Americans might do with the money what they have been rightly criticized for not doing nearly enough: save it. Because individual consumption is 70 percent of economic activity, St. Augustine's prayer ("Give me chastity and continence, but not yet") is echoed today: Make Americans thrifty, but not now.

Obama's "rescue plan for the middle class" includes a tax credit for businesses "for each new employee they hire" in America over the next two years. The assumption is that businesses will create jobs that would not have been created without the subsidy. If so, the subsidy will suffuse the economy with inefficiencies -- labor costs not justified by value added. Here we go again? A new New Deal would vindicate pessimists who say that history is not one damn thing after another, it is the same damn thing over and over. George Will's e-mail address is georgewill(at)washpost.com. (c) 2008, Washington Post Writers Group