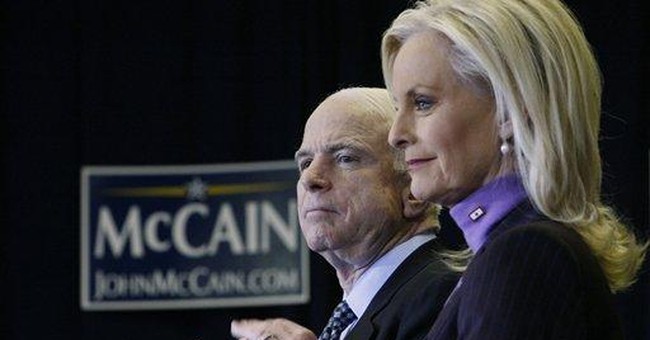 WASHINGTON -- In 2004, one of John McCain's closest associates, John Weaver, spoke to John Kerry about the possibility of McCain running as Kerry's vice presidential running mate. In "No Excuses," Bob Shrum's memoir of his role in numerous presidential campaigns, including Kerry's, Shrum writes that Weaver assured Kerry that "McCain was serious about the possibility of teaming up with him," and Kerry approached McCain. He, however, was more serious about seeking the 2008 Republican nomination.

But was it unreasonable for Kerry to think McCain might be comfortable on a Democratic ticket? Not really.

In ABC's New Hampshire debate, McCain said: "Why shouldn't we be able to reimport drugs from Canada?" A conservative's answer is:

That amounts to importing Canada's price controls, a large step toward a system in which some medicines would be inexpensive but many others -- new pain-relieving, life-extending pharmaceuticals -- would be unavailable. Setting drug prices by government fiat rather than market forces results in huge reductions of funding for research and development of new drugs. McCain's evident aim is to reduce pharmaceutical companies' profits. But if all those profits were subtracted from the nation's health care bill, the pharmaceutical component of that bill would be reduced only from 10 percent to 8 percent -- and innovation would stop, taking a terrible toll in unnecessary suffering and premature death. When McCain explains that trade-off to voters, he will actually have engaged in straight talk.

There are decent, intelligent people who believe that equity or efficiency or both are often served by government setting prices. In America, such people are called Democrats.

Because McCain is a "maverick" -- the media encomium reserved for Republicans who reject important Republican principles -- he would be a conciliatory president. He has indeed worked with Ted Kennedy on immigration reform, with Russ Feingold on restricting political speech (McCain-Feingold) and with Kennedy and John Edwards -- a trial lawyer drawn to an enlargement of opportunities for litigation -- on the "patients' bill of rights."

McCain is, however, an unlikely conciliator because he is quick to denigrate the motives, and hence the characters, of those who oppose him. He promiscuously accuses others of "corruption," the ubiquity of which he says justifies McCain-Feingold's expansive government regulation of the quantity, timing and content of campaign speech.

McCain says he would nominate Supreme Court justices similar to Antonin Scalia, Clarence Thomas, John Roberts and Sam Alito. But how likely is he to nominate jurists who resemble those four: They consider his signature achievement constitutionally dubious.

When the Supreme Court upheld McCain-Feingold 5-4, Scalia and Thomas were in the minority. That was before Alito replaced Sandra Day O'Connor, who was in the majority. Two years later, McCain filed his own brief supporting federal suppression of a right-to-life group's issue advertisement in Wisconsin because it mentioned a candidate for federal office during the McCain-Feingold blackout period prior to an election. The court ruled 5-4 against McCain's position, with Alito in the majority.

There is a place in American politics for moralizers who think in such Manichaean simplicities. That place is in the Democratic Party, where people who talk like McCain are considered not mavericks but mainstream.

Republicans are supposed to eschew demagogic aspersions concerning complicated economic matters. But applause greets faux "straight talk" that brands as "bad" the industry responsible for the facts that polio is no longer a scourge, that childhood leukemia is no longer a death sentence, that depression and other mental illnesses are treatable diseases, that the rate of heart attacks and heart failures has been cut more than in half in 50 years.

When McCain and Joe Lieberman introduced legislation empowering Congress to comprehensively regulate U.S. industries' emissions of greenhouse gases in order to "prevent catastrophic global warming," they co-authored an op-ed column that radiated McCainian intolerance of disagreement. It said that a U.N. panel's report "puts the final nail in denial's coffin about the problem of global warming." Concerning the question of whether human activity is causing catastrophic warming, they said, "the debate has ended."

Interesting, is it not, that no one considers it necessary to insist that "the debate has ended" about whether the Earth is round. People only insist that a debate stop when they are afraid of what might be learned if it continues.