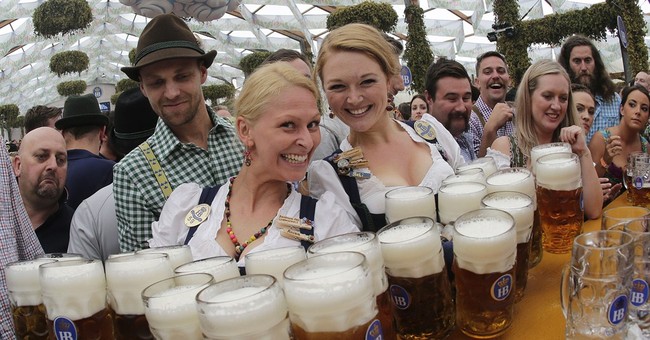 I remember sitting on a bench in a park near the Votivkirche back in the 80s watching some children play and thinking, how lucky they are to be able to grow up in Vienna. The Austrians had been, unfortunately, big supporters of Hitler, but before him Vienna had been a city of great history and culture, the city of Beethoven, Maria-Theresia, Metternich, Otto Wagner, Strauss, Prince Eugen, Gustav Klimt, F.A. Hayek, and Ludwig von Mises.

I thought of Vienna last week when I read in a German newspaper that two teenage girls born and raised there had joined ISIS and one of them might have been killed in fighting. Earlier reports had referred to them as the “pin-up girls” of the Islamic State. The two young ladies in question were from Bosnian Muslim families. Their parents claim that the girls became radicalized after attending prayers at a notorious mosque. Perhaps or perhaps not.

Last week I was in a bank in Munich, Germany, standing behind a woman in her mid-30s with two daughters, one about thirteen, the other about ten. All three of them were wearing hejabs, the Islamic head-covering for women. I thought at first that they were Arabs, but when the woman spoke to her daughters in Serbo-Croatian, I realized that they were Bosnian Muslims. I have been in Bosnia many times, and back in the 1980s, for example, you would see a lot of women wearing headscarves—Muslim, Croatian, Serbian—but they were usually uneducated, old women living in villages. A headscarf was part of the uniform of the village granny. Hejabs, on the other hand, as a symbol of Islamic identity, were a rarity. You were more likely to see a young Bosnian Muslim woman wearing a bikini than a hejab.

The two young girls in Munich clearly had not been radicalized in any mosque; it was their mother, or perhaps their father, who was bending them away from the West. And the girls’ parents would certainly get much support in that from their kids’ teachers and the news media.

Back when I was a student at the University of Vienna, Austrians used to taunt me and other Americans with the phrase “keine Kultur “(no culture). America was a new country, they said, without the sophistication that comes from many centuries of development. That was what they said back in the “dark days” of the Reagan administration, when German and Austrian pop groups made hit songs like “Eiszeit” and “99 Luftballons” about the coming nuclear holocaust threatened by that “mad cowboy.” Reagan was symbolic to them of a land with no history, no civilization, and no culture. Strange it is, then, that the Austrians and Germans should give up their great culture and history so easily.

I doubt that university students in Vienna today are quick to reference Judeo-Christian traditions, the Ancient Greeks and Romans, the Renaissance, or the Enlightenment as symbols of sophistication. The cool thing now is to be “European.” But being “European” does not mean practicing Christianity in any one of the thousands of Romanesque, Gothic, or Baroque churches in Germany and Austria, which are usually empty on Sunday, if they are still used as churches at all. Nor does it mean admiring dead white males like Charlemagne, Leonardo Da Vinci, Beethoven, or Shakespeare. No. It means worshipping socialism, big government, moral relativism, climate change, and multi-culturalism. It means admiring everything in the non-Western world while kicking back and living off state benefits. Their motto reads, “Go on vacation and leave everything else up to the state”--only suckers practice the old morality, go to work, pay taxes, and visit museums.

Yet, at the same time the religion of Europeanism has been taking root, another religion has been vying with it for space. That religion is Islam, and it is aggressive and demanding when Europeanism is feeble and yielding. Whereas the highest achievement for a European socialist would be getting lifetime benefits, for a believer in Islam, rapture can best be experienced by fighting and dying for one’s faith. European socialism may appeal to the old and lazy, but for the young and energetic Islam has much more to offer.

Those two waves represent the immediate future for Central Europe. There is nothing like Fox News or talk radio, where Germans or Austrians can hear opposing views. On the contrary, they are bombarded with leftist propaganda in their news media, entertainment, and schools. And, if somehow alternative ideas were to creep into a free-thinking mind, there would be someone right there to intimidate that person into silence.

What does it all mean? Will the three ladies in the bank be ruminating about Goethe, Beethoven, and German Romanticism someday in the future? I cannnot say. But I can say that there will be more women with hejabs on the streets of Munich and Vienna, and fewer people going to museums. Does the future have keine Kultur?