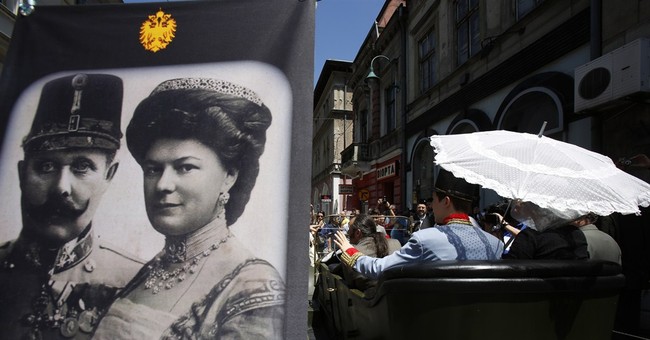 On this one-hundredth anniversary of the beginning of World War I, we have a chance to look back with a historian’s eye at the assassination in Sarajevo, at the people involved, and the broader meaning of the incident for the world today.

In a nutshell, on June 28, 1914, six young men stood in positions on street corners and sidewalks in Sarajevo with the intent to kill the Austrian Archduke, Franz Ferdinand, the heir to the Habsburg Empire. The six young men belonged to a group called Mlada Bosna (Young Bosnia), which hoped to free Bosnia-Hercegovina from Austro-Hungarian rule and unite it with Serbia in a nation of South Slavs. Five of the men were ethnic Serbs. One, Muhamed Mehmedbasic, was a Bosnian Muslim.

On that sunny day, as the Archduke’s motorcade rolled down the streets, it passed the first assassin, Mehmedbasic, who lost his nerve and did not throw his bomb. The second assassin also failed to act, but the third one, a young man named Nedeljko Cabrinovic, tossed his bomb at the passing car. His bomb, however, bounced off the archduke’s vehicle and exploded under a following car in the motorcade, destroying that vehicle and wounding more than a dozen people. Hearing the explosion, the last three assassins were surprised to see the archduke’s car speed past them, and they failed to act. Franz Ferdinand, angry that someone had just tried to kill him, gave the mayor of Sarajevo a piece of his mind as they met at the City Hall, the final destination. Trying to calm her husband, the archduke’s wife, Duchess Sophie, suggested that they abandon their plans for the day and visit the wounded bomb victims in the hospital instead. Franz Ferdinand agreed, and they got back into their car and headed back onto the road. It was then, as they were on their way to the hospital that their driver turned onto a side street and the sixth assassin, a nineteen-year-old kid named Gavrilo (i.e., Gabriel) Princip, still waiting on the corner, saw his chance, stepped forward and fired two shots which resulted in the death of the archduke and his wife.

The immediate consequences of the assassination were anti-Serbian riots and pogroms. Incited by the Austrian Governor and Croatian nationalists, for several days mobs attacked Serbs, their homes, their businesses, and their churches. Reports submitted by the Austrian Governor Oskar Potiorek two days later said that all Serbian shops in Sarajevo had been destroyed. Many prominent Serbs were expelled or imprisoned, and 460 were executed. Sarajevo, for the first time in its history, was divided by ethnicity.

Next came power-politics. The alleged mastermind of the plot, Colonel Dragutin Dimitrijevic, known as Apis, was head of Serbian Military Intelligence. That was enough for the Austrians to blame the government of Serbia for the assassination and issue a ten-part ultimatum. For many in Europe, it looked like a call to war. Winston Churchill wrote, “The Austrian ultimatum to Serbia (is) the most insolent document of its kind ever devised.” Edward Grey, British Secretary for Foreign Affairs, said, “Any nation that accepted conditions like that would really cease to count as an independent nation.” The Serbian government denied being involved in the plot and accepted all demands of the ultimatum except for the part which would have allowed Austrian agents to do their own investigations on Serbian soil. The K-und-K government was not satisfied; a month after the assassination, on July 28, Austria-Hungary declared war on Serbia, and World War I began.

What does it all mean? For many people, today’s anniversary is another chance to disparage the Serbs. And why not? The Serbs are politically weak and unlikely to retaliate, no matter what is said about them. When Yugoslavia broke up, the news media put black hats on the Serbs for years, and now Hollywood regularly chooses them as villains. Anyone who has seen American movies or TV shows in the past twenty years is likely to have noticed that many of the bad guys are Serbs (or Russians or educated Englishmen). In the 1996 movie The Rock, FBI bomb expert Nicholas Cage tries to disarm an explosive device containing sarin gas packed in a box labeled “Aid to Bosnia” and “Sloboda ili Smrt”—“Freedom or Death”—the slogan of the Serbian Chetniks. Also in 1996, the Steven Seagal action flick “Glimmer Man” features our hero trying to prevent Russians from supplying Serbian terrorists with chemical weapons (although it is never explained why they would buy them in the US instead of Russia). More recently, the Ice Cube-Kevin Hart, comedy-action film Ride Along concerns Serbian arms dealers, and recent TV shows like Burn Notice, Sherlock, and Flashpoint treat us to Serbian arms dealers or terrorists. In between 1996 and 2014 Hollywood also gave us Behind Enemy Lines, Diplomatic Siege, The Fourth Angel, Extreme Ops 2, The Hunted, Hunt for Justice, The Hunting Party, The Peacemaker, The Filthy War, and Storm, among others, in which Serbs are the people we are supposed to hate. Ironically, the last time a Serb committed a terrorist act was exactly one hundred years ago—in Sarajevo.

Today is also an opportunity for self-styled Balkan experts to sound wise. These people tend to be anti-Serbian as well and say things like “ISIS, the Sunni extremists in Iraq, are just like those Serbian nationalists back in 1914.” Really? ISIS seems more like the Austrian government of Bosnia-Hercegovina and the Croatian nationalists who inflicted a pogrom on the Serbs.

Perhaps, the real lesson we can apply today is about nationalism and our double-standard regarding it. We look down on some people. Self-determination is for people we like, not for those we don’t. An Englishman waving a Union Jack is a “patriot,” but a man in Crimea waving the Russian tricolor is an “ultranationalist.” Both are in their homeland among a majority of their own people, but we despise the latter and do not allow him to determine his own fate. He is required to live under a foreign power, like the South Slavs in Bosnia-Hercegovina in 1914.