Union Corruption Hurts Everyone. But It Harms the Most Vulnerable the Most.

George Landrith
|
Posted: Jan 14, 2021 12:01 AM
Share   Tweet
The opinions expressed by columnists are their own and do not necessarily represent the views of Townhall.com. 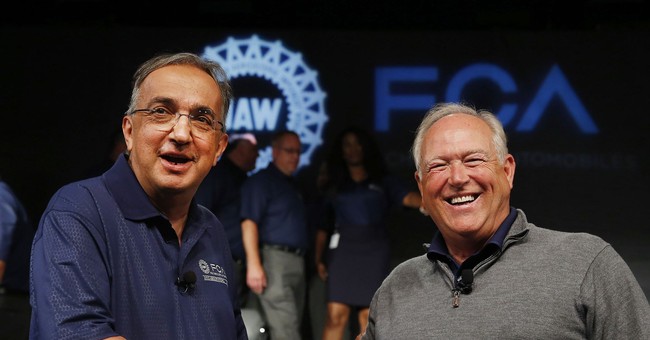 This past year was one of the most tumultuous in memory. Widespread economic collapse, social and societal upheaval, violent riots, an acrimonious election cycle, and a worldwide pandemic are just a few of the major sources of upheaval.

These sorts of massive disruptions to the norm create opportunities for change and improvement. Some use those opportunities productively to work for solutions that fix real problems and improve lives. But sadly, many use these disruptions to cynically advance their own agenda while feigning concern for the plight of others. Unfortunately, organized labor falls into this latter group.

In a time when so many Americans desperately want a job and a way to fund the hopes, dreams and aspirations of their family, too many union leaders are slamming the door shut on the very people they claim to serve. To make matters worse, too many union leaders are also padding their own pockets and working to advance their own power and influence at the expense of their members.

Here are a few recent examples. Dennis Williams, the former president of United Auto Workers (UAW), pled guilty to embezzling hundreds of thousands of dollars from the union. And this scandal was preceded by his successor at the UAW, Gary Jones, admitting that he helped steal more than a million dollars from union workers. That’s a bad trend line!

James W. Cahill, a powerful and politically well-connected union leader, was indicted on racketeering and fraud charges. Federal prosecutors allege that he and others accepted bribes to aid companies that had hired nonunion labor. So the charges include accepting under the table money to work against your own members. But we are supposed to believe that the union is working to help union workers.

Chuck Stiles, the Director of the Teamsters Solid Waste and Recycling Division, has allegedly been taking large annual payouts of $65,000 for a “phantom job” on top of his $150,000 annual salary. These allegations don’t come from some union-hating critic, they come from an active member of the Teamsters Union. On top of that, there are allegations that Stiles’s son has also received a difficult-to-explain $10,000 payout from union funds.

This sort of double self-dealing, if true, is very troubling and it raises the question — are these unions really representing their members or are they simply pretending to, and then enriching themselves while carrying on the charade.

The cynicism doesn’t end with corrupt payments or self-dealing. For example, Stiles has decided to try to leverage the Black Lives Matter (BLM) movement to increase support for the struggling labor movement. Yet the labor movement has not historically been the friend of racial minorities. And Stiles has no history of supporting minority candidates or causes. Interestingly, a public photo of Stiles in blackface has also recently emerged. So the idea that Stiles has some deep commitment to helping blacks or other minorities is a little hard to swallow. It is a fair question to ask — how serious and how sincere is this newfound interest in minorities and their economic welfare?

More than five million manufacturing jobs disappeared from the American economy between 1999 and 2011. The exodus of good paying jobs continued through 2016. China was the single biggest factor. This massive jobs exodus harmed working-class blacks, yet BLM has been silent on China and refused to support policies that would reverse our economic losses to the Communist Country. Instead, they’ve focused on odd conspiracy theories about obesity and diabetes in the black community — as if that has been more consequential to black employment and poverty than jobs being exported abroad.

Given all that has transpired, when BLM and unions claim to be teaming up to protect and promote the interests of working-class blacks, a huge dose of realism is needed. Who actually benefits when unions “team up” with BLM but they both refuse to actually do what is needed to promote good paying manufacturing and other skilled labor jobs? It won’t be minority workers.

Someone who claims they support workers, must point to how they’ve helped make real improvements in the lives of workers — more jobs, higher wages, etc. This is not the track record of unions or BLM in the past two decades. They have done a good job of enriching themselves and raising money and obtaining political power for themselves. But where is the evidence that they have done anything for the average American worker — black or white? And why haven’t they supported policies that have actually worked and benefited American workers — and particularly minority workers?

These questions answer themselves. Both unions and BLM do more posturing than actual good, and they are teaming up hoping to hide this inescapable truth so that they can continue to prosper while feigning concern for those they claim to represent.