George Landrith
|
Posted: Jun 27, 2018 12:01 AM
Share   Tweet
The opinions expressed by columnists are their own and do not necessarily represent the views of Townhall.com. 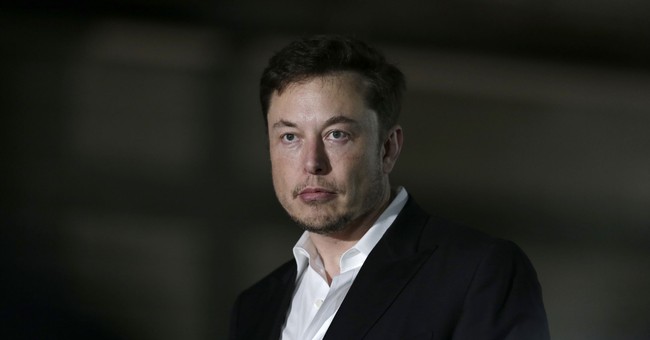 Elon Musk made headlines last week when he declared via Twitter that he is “a socialist.”

But hardworking ratepayers and taxpayers who must endure price hikes to subsidize the electric car industry have long been aware of Musk’s preference for wealth redistribution – not through Twitter but Tesla.

Electric vehicle manufacturers are the beneficiaries of zero-emissions credits – through which the multibillionaire’s corporation received $860 million throughout the last three years – as well as charging stations funded by ratepayers. Owners of luxury electric vehicles, meanwhile, can take advantage of a federal $7,500 tax credit and, as a POLITICO piece recently explained, “purchase rebates as large as $5,000, additional rebates for vehicle chargers, and free use of public charging stations… only ‘free’ because they’re subsidized by ratepayers and taxpayers.” It would therefore be more accurate to label utility-built charging stations, to which they are commonly referred, as ratepayer-built charging stations.

Take the $776.5 million electric vehicle project approved just last month by the California Public Utilities Commission, for example. The project includes giveaways such as “rebates for customers to install up to 60,000 charging stations in homes for electric vehicles.” As The San Diego Union-Tribune reports, “the money for the programs will come from ratepayers” – “spread across the millions of customers those utilities have.”

We now know who foots the bill – middle-class energy consumers. But who exactly are these electric vehicle owners – the ones benefitting from government goodies and subsidies? Fresh data released last month by the U.S. Energy Information Administration shed light on who comprises the industry’s clientele: the wealthy. More specifically, 42 percent of households owning battery electric (BEVs) or plug-in hybrid electric vehicles (PHEVs) make more than $150,000 per year, while 67 percent make more than $100,000 annually. Overall, “households that own BEVs and PHEVs tend to have more vehicles per household.” These data points confirm the 2017 nationwide survey conducted by CarMax/CleanTechnica, which also found that 17 percent of households – the highest percentage of the ten income brackets listed – earned above $200,000 the previous year.

The reverse Robin Hood system of spreading the wealth to the wealthy is under severe scrutiny. A new American Energy Alliance poll reveals that an overwhelming 67 percent of voters “are resistant to the idea that they should pay for people to buy electric vehicles,” while “nearly in 7 in 10 respondents, or 69 percent, agreed that electricity customers should not be forced to pay for the cars’ recharging stations.” Meanwhile, even the liberal Daily Kos writes that “in reality [the current $7,500 tax break for electric cars] has benefited some folks who are a bit better off than others,” and a piece republished by The Huffington Post notes that “in some states, officials say that letting the utility industry build more stations would force all electricity consumers to pay for a service that only a few, relatively affluent, people will use.”

Amid the “slow growth” for electric vehicles and Tesla’s record losses, industry behemoths and special-interest groups are seeking to not only preserve federal tax credits but also remove the cap of 200,000 EVs eligible for them per manufacturer. Instead, we should either preserve the cap or remove the federal tax credits altogether. It’s quite clear that these credits have emerged as a lifeline the industry has come to expect – and a luxury its wealthy clients have come to enjoy.

In contrast to the silence of electric vehicles, voters are making loud and clear their strong opposition to subsidizing the “toys of the rich.” Lawmakers should listen and reject proposals peddled by billion-dollar corporations for millionaire clientele – all on the backs of their middle-class constituents.