George Landrith
|
Posted: May 16, 2016 11:54 AM
Share   Tweet
The opinions expressed by columnists are their own and do not necessarily represent the views of Townhall.com. 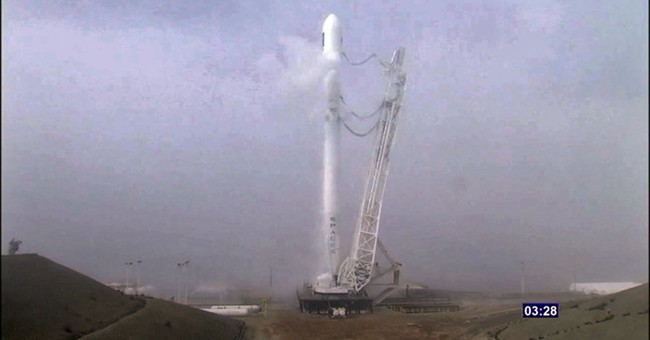 After the Cold War ended in the early 1990s, there was significant concern within the U.S. Government that scientists and engineers of the former Soviet Union would sell critical technologies, particularly ballistic missile and weapons technologies, to U.S. adversaries and rogue groups. Given its low cost and outstanding performance, the RD-180 rocket engine was at the top of that list. The U.S. made the decision to buy these engines instead of making investments in developing new advanced rocket engines of our own and today we lack the high performance capability the Russian engines provide. Thanks to Congressional pressure and funding, we are well down the road towards a new American made engine to replace the RD-180 and this problem will be solved by the next presidential election. But in the meantime, we have to put in place some stop gap measures to ensure we don’t see our access to space compromised or see our high tech superiority slip.

We have some new American companies that can handle some of our national security space launch needs. But our space access needs are varied and for about one-half of the necessary missions we will not have a rocket with an American-made engine to fill the need. While that problem should never have been allowed to develop, it is in the process of being solved. Until it is solved, we have to keep our options open.

Our best near-term option is to continue to use RD-180 engine. It is inexpensive and it works. As a staunch conservative and believer in President Reagan’s peace through strength approach who also fought hard against America buying a foreign made air refueling tanker, I am not at all happy about buying a Russian made rocket engine. But the reality is until we finish development, testing and certification of our own American rocket engines that will replace the functionality of the RD-180, we simply don’t have much choice.

Some argue that our best option is to push all the space access work toward Elon Musk’s Space-X. While that may be tempting, it simply isn’t a serious solution. Space-X cannot perform about one half of the national security space missions. This isn’t my opinion. It is the reality of physics and the judgment of our Defense Department. We cannot limit our capability for the next several years. We cannot leave our warfighters in the dark.

Even aside from Space-X’s ability to satisfy only part of our space access missions, there are concerns about Space-X’s business model of cronyism and sweetheart deals pushed by Musk’s high-priced lobbyists and backers in Congress. Much like Musk’s high end electric car, Tesla, the business model requires scandalously heavy taxpayer funding to make it possible. It is good work, if you can get it. And Musk has the right friends in the right high places to get those sweetheart deals.

Robust competition between American companies must be the goal because it will raise quality and keep costs down and ensure our national security needs. Space-X’s track record is littered with launch failures and even when the launch has worked, the return trip has been problematic with numerous payloads being damaged by leaks in the so-called reusable capsule which has yet to be reused. Competition will fix these problems.

We are all eager for the day when we are buying zero Russian rocket engines. But until that day arrives, we cannot afford to give away our “eye in the sky” advantages. On a practical level, we should buy the Russian engines and get them in inventory as soon as possible. Then the Russians can’t play politics or hold us hostage. And the Congress needs to loosen the draconian restrictions of use of these engines for national security missions. The House Armed Services Committee recently approved legislation authorizing use of 18 additional RD-180 engines, in line with what Department of Defense leadership has repeatedly said is needed in order to maintain our ability to launch until the new American engine is available. This is the right answer for competition and for national security.

Some argue we can hurt Putin by not buying his engines. But the truth is — more than 99.4% of America’s imports from Russia are for things other than rocket engines. Petroleum constitutes 72% of our Russian imports. Only three-fifths of one percent (0.6%) are for things like reactors, machinery, and appliances — which includes rocket engines. So, if we buy no RD-180s, we will not punish anyone, except our warfighters. Bluntly, the daily fluctuation of the price of oil has a far larger impact on Russia’s exports than any rocket engine purchase ever could. But one thing is for sure, if we don’t buy them, our national security could be at risk as our access to space will be limited.

While some may hide behind the mantra of punishing Putin to justify opposition to use of rocket engines in the short term, it seems a great deal more likely that they are just shilling for Mr. Musk and working another crony deal for their well-connected pal.

Americans ought to strongly support our own domestic rocket engine capability — which will be a reality in the near future. But until then, Americans must support our warfighters and guarantee that our access to space is not limited. Thus, we must authorize continued use of the RD-180 engine until the replacement engine is ready for these critical missions.