Obama: Sowing the Seeds of Vulnerability 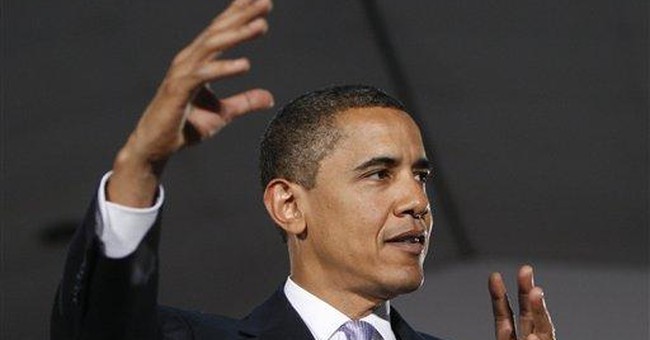 President Barack Obama recently acknowledged “I will be judged as commander-in-chief on how safe I'm keeping the American people.” Sadly, Obama has been actively sowing seeds of weakness and vulnerability and putting America at greater risk. George Washington wisely said, “To be prepared for war is one of the most effectual means of preserving peace.” Simply stated, peace is achieved through strength and, conversely, weakness invites attack. But Obama is slashing important defense programs at an alarming rate. His defenders say it is to cut federal spending, but that is a laughable excuse given the billions his budget doles out to political allies.

Given these risks, what should we do? Demonstrate that we will always be strong and resolute? Or signal that we will place our trust in the “goodwill” of our enemies?

George Washington’s advice provides the only sensible solution – be prepared and be strong. Sadly, Obama is sending the opposite message – that America is going to relax its defenses and vainly hope that those who have threatened us and our allies don’t really mean it.

Obama is slashing missile defense, reducing our commitment to having the best equipment available for our fighting men and women, and putting on hold critical weapons systems like the F-18, F-22, Future Combat Systems, search and rescue helicopters, and new air refueling tankers. Obama is endangering America’s security.

The only question is when. Will it be in time to prevent the next attack? Or the day after? The answer to this question will shape history.

Eight years of Clinton’s projected weakness invited the attacks of September 11, 2001. On Monday, September 10, 2001, few Americans were concerned that America had spent most the 1990’s projecting weakness.

For most of the 1990s, the White House could not muster any real or sustained interest projecting strength. After the 1992 bombing of the World Trade Center which killed six and wounded scores when terrorists unsuccessfully attempted to topple the towers with vans loaded with explosives, the White House treated the attack as a run-of-the-mill crime – akin to a liquor store robbery – but not as a national security threat. A man who drove an explosive truck was sent to jail while the terrorist cells that planned the attack continued their plans and struck again almost nine years later with vastly more devastating results.

In 1993, warlords killed 28 American soldiers and wounded 133 others who were keeping the peace and distributing food to a war-ravaged Somalia. On October 4, 1993 mobs dragged the dead bodies of three American soldiers through the streets of Mogadishu. We did nothing.

In 1998, terrorists bombed and leveled two American embassies in Kenya and Tanzania, killing 257 people and wounding over 5,000. In 2000, terrorist cells bombed the U.S.S. Cole, killing 17 sailors and nearly sinking the ship while it refueled. The White House denounced these attacks but did little else. Our enemies became emboldened and stronger. America became comparatively weaker.

By Monday, September 10, 2001, America had spent almost a decade telling its enemies in unmistakable terms – we are not prepared – we lack the will to defend ourselves – if you attack us, it is unlikely we will respond with anything more than a press release.

But by mid-morning on Tuesday, September 11, 2001, all of America for a brief time understood the need to follow George Washington’s advice -- be prepared and show strength. Will we repeat this error? It appears Obama is well on his way to doing precisely that. So one can fairly ask, what future attack is Obama’s policy and weakness inviting?