Gabriella Hoffman
|
Posted: Dec 18, 2020 12:01 AM
Share   Tweet
The opinions expressed by columnists are their own and do not necessarily represent the views of Townhall.com. 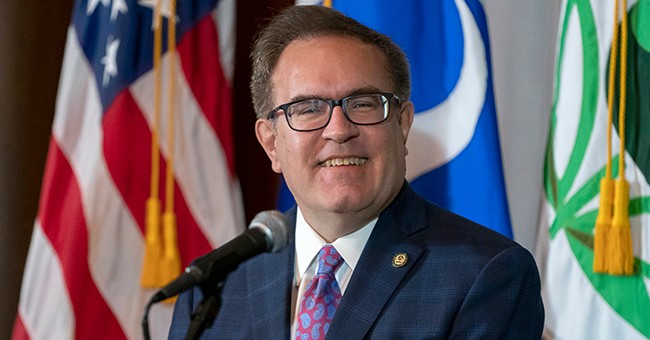 How did our environment fare under the Trump administration these last four years?

Was the impact “disastrous” as critics prophesied? Did President Donald Trump’s policies accelerate global warming? Were his policies a “joke” or bad for the environment as the media and environmental groups claimed? Did Trump’s administration actively undermine our clean air and clear water standards?

Administrator Wheeler recently chatted with me about the agency’s accomplishments across its 50-year history, what the media got wrong about Trump’s environmental record, and more.

Previously deputy EPA administrator, he was confirmed by the U.S. Senate in February 2019 to fill the role vacated by his boss Pruitt (who resigned in July 2018).

“We have deregulated,” Wheeler admitted. “We saved [the] American taxpayer 100 billion dollars. But in many cases when we deregulate, we replace the regulations with a new regulation that updates the science— updates the standards.”

“What we’re doing is doing away with two or three old regulations and replacing it with one. It’s sort of cleaning house,” he added.

Did his efforts to rein in the agency lead to rampant environmental destruction across the U.S.? The evidence clearly suggests otherwise.

The EPA recently published findings showing greenhouse gas (GHG) emissions are currently at historical lows, despite our exit from the unenforceable—and equally disastrous—Paris Climate Accords. Per a recent EPA report, emissions were down five percent between 2018-2019. This year alone, emissions are down an impressive nine percent compared to last year.

As for Superfund cleanups of toxic sites, Wheeler proudly touted his work on this front.

“We’ve cleaned up enormous numbers of [Superfund] sites across the country, and it’s really an achievement,” Wheeler said.

And one unlikely source, POLITICO, agreed with the sentiment and aptly concluded, “The EPA under Trump has showed what it can look like when an administration gets serious about cleaning up long-neglected sites... Some have seen their backyards and communities finally cleaned up because of the Trump administration’s EPA.”

Wheeler confirmed this and noted, “He [President Trump] has stood up for the environment on the Bristol Bay in Alaska.”

Past EPA policies, Administrator Wheeler argued, had “a perverse outcome in communities.”

As a result, the avid hiker said his goal was to prioritize transparency in the rulemaking process. Most recently, the EPA announced a new cost-benefit analysis report relating to the Clean Air Act—a template, he hopes, future agency heads will emulate in the years ahead.

“All our cost-benefit rule does is require the agency to put in the preamble of future rulemakings what are the costs and what are the benefits—to follow a standardized method of identifying these costs and these benefits,” he added.

Since EPA’s inception 50 years ago, our nation has emerged as a global environmental leader.

Has the agency always had our best interests in mind? Not always. (See the Obama administration’s EPA and revisit its innumerable scandals.) But under President Trump, it promoted the notion that a healthy environment can happily coexist with a healthy business climate.

Will history judge this EPA kinder than critics currently allow? It remains to be seen.

Townhall readers can learn about the EPA’s happenings online and connect with Administrator Wheeler on Twitter and Parler.