All Eyes on Georgia: We Cannot Allow the Radicals to Overtake Majority Dems

Gabe Kaminsky
|
Posted: Dec 31, 2020 12:01 AM
Share   Tweet
The opinions expressed by columnists are their own and do not necessarily represent the views of Townhall.com. 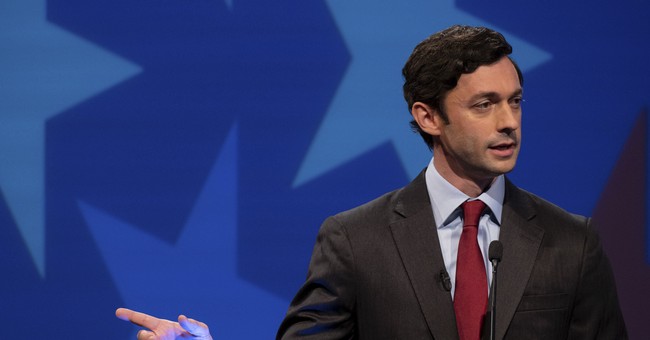 With progressive radicals Raphael Warnock and Jon Osoff on the ballot in the January Georgia Senate run-off elections — it is imperative to revisit why the coming fight matters in the first place.

As is well-known, Reps. Alexandria Ocasio-Cortez (D-NY), Ilan Omar (D-MN), Ayanna Presley (D-MA), and Rashida Tlaib (D-MI) encompass “The Squad.” This identification came to be when AOC posted a picture on Instagram with the four lawmakers at Congressional Freshman Orientation Week — captioned on November 12, 2018.

Yes, it is all so very touching.

There is a reason “The Squad” have banded together, as should be transparent by now. Since being elected, these four young, naïve representatives have advocated for likewise socialist reform and asserted controversial things that have no doubt landed them in hot water with both Democrats and Republicans. They have displayed staunch anti-Semitism and a disavowal of Israel, a commitment to a $93 trillion “Green New Deal,” as well as anti-American sentiments that would have rendered the Founders speechless.

In a 2019 New York Times op-ed, for instance, Rep. Ilan Omar likened the election of the 45th president of the United States, Donald J. Trump, to an African civil war.

Let’s be clear. Progressives such as these four individuals remain in the minority not only in the United States Congress — but in the nation as a whole. According to a 2016 YouGov poll, socialism is an ideology that overwhelmingly influences the youth. The research found that 43 percent of those 18 – 29 had a “favorable” view toward socialism, compared to 27 percent aged 30 – 64, and then only 23 percent of those 65+. A 2020 Marist poll similarly found that only 28 percent of adults had a positive view of socialism. Only 38 percent of millennials and Gen Z were accounted as having a favorable view as well (5 percent fewer than the 2016 study).

This data is certainly telling about the actual sorts of policies people favor. But we cannot become complacent in the perpetual fight for freedom. While this election was a major success for conservatism in districts across the country — having gained 13 house and one Senate seat — there are certainly similar “Squad” like radicals who were elected to office in 2020, or who are close.

One is Missouri congresswoman-elect Cori Bush. Bush supports Medicare for All, the “Green New Deal,” and even recently derailed against the left’s darling President Obama in his call to disavow defunding the police.

“It’s not a slogan. It’s a mandate for keeping people alive,” Bush responded, “Defund the police.”

As we turn our attention toward the Georgia Senate races, it is abundantly clear that Raphael Warnock and Jon Osoff support a similar radical agenda as “The Squad.” Warnock even openly flirts with the term Marxism, something the four congresswomen have not used verbatim.

In a debate on Dec. 6, Warnock failed to condemn Marxism or socialism when asked by Republican Sen. Kelly Loeffler. Further, Warnock has claimed that both “the Marxist Critique has much to teach the black church,” and that the black middle class should concentrate on the “hard questions about the distribution of wealth.”

We cannot overlook the dictatorial platform of Jon Ossoff either. According to his website, he supports “a ban on the sale of semi-automatic rifles and high-capacity magazines,” as well as, “four-year degrees at our public colleges 100% debt-free.” Osoff backs a loan forgiveness program intended to force the American citizen to subsidize students going to college by unilaterally raising taxes. For a party that is endlessly obsessed with income inequality, the left’s notion that working-class Americans should subsidize trust fund babies’ college is laughable.

It is thus crucial for the very prosperity of America that Sens. Kelly Loeffler and David Perdue win the Georgia elections to help retain a GOP majority. Not because these two Republican candidates are particularly appealing; but because we cannot allow “The Squad” to gain any additional footing in Congress, and nor can we allow Biden to have a Senate at his disposal to push forward radical reforms such as packing the court, eliminating the filibuster, conferring Puerto Rico and Washington, DC statehood — and so on.

This means showing out for the elections like our civil liberties depend on it. Because they do.

President-elect Joe Biden may in fact hide behind a shroud of moderation, but his policies are not too far off from the utopian extremists. Among other championed positions, Biden has recently expressed support for ending cash bail, repealing “right to work” laws — which allow people the right to reject union membership — and notably wants to “provide a roadmap to citizenship for the millions of undocumented workers.”

Besides winning Georgia, the GOP needs to refocus on the overarching cultural issue at helm. Many conservatives today reject the idea of working across the aisle, given doing so often means catering to the left’s desired outcomes. I get it. The left bullies us around constantly.

But it could not be more important at this given time to at least try to do so.

Republicans need to work with the moderate Democrats in congress, in some capacity, to act as a bulwark against “The Squad” — and the inevitable progressives like Bush, Ossoff, and Warnock who will join up.

If we do not take up the mantle of our predecessors in opposing collective mob rule, the U.S. will succumb to increasing levels of what Dennis Prager refers to as “Sovietization.” We will fall to tyranny as many other great nations have — and are at this very moment.

It is our job to take this mantle with dignity, knowing full well what hangs in the balance.

Gabe Kaminsky is a student at the University of Pittsburgh. His writing has been also published in the Daily Wire, The Washington Times, the Washington Examiner, RealClearPolitics, Broad and Liberty, and other outlets. Reach him at gkaminskycontact@gmail.com.