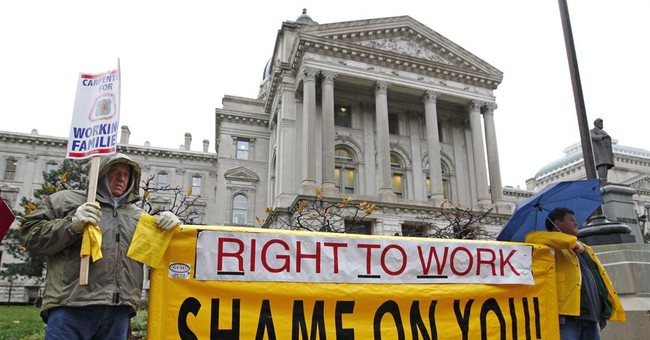 Imagine someone goes to your boss and strikes a deal. The deal could be something your boss wants or it could simply be to not harm his business. All your boss has to do is agree to have you pay this person every month out of your paycheck. Technically you have a choice, but if you decline the person will know and so will your boss. Oh, and your boss already gave that person your home address. In the world of labor relations, this is known as a “neutrality agreement.”

It sounds like something out of a bad mafia movie, but that is what happened to Martin Mulhall and his colleagues at Mardi Gras Gaming in Florida. The “person” was actually the union, UNITE HERE.

In a typical neutrality agreement, a union generally requires a business to capitulate to three main demands:

The last requirement is called a card check election and can lead to intimidation and coercion. All the union needs to organize the company and start getting paid is to get cards signed — in the open — and does not need to bother with an election. Unions prefer card check because it makes their job easier. It is a central part of neutrality agreements.
CARTOONS | AF Branco
View Cartoon

Despite conventional wisdom, there are three groups in collective bargaining. The first two, labor organizations and businesses, are generally the only ones mentioned. The third group is the workers themselves.

More and more, through collusion, such as supporting an employer’s political causes, and from union intimidation tactics called corporate campaigns, labor organizations and businesses are on the same side.

In many instances a union will target an employer and try to destroy its reputation by coordinated attacks on the business’s brand, and the employers themselves. The attacks can come as protests and boycotts by community organizations (in some instances union supported community organizations such as the union front groups called worker centers), elected officials bringing political pressure, and bureaucrats bringing regulatory pressure. All of this can end if only the employer will give in to the union.

In either situation — the employer getting a benefit from the union or ending a detriment — it is the workers who are left out in the cold.

That could all change. The Supreme Court recently heard Unite Here Local 355 v. Mulhall, a case brought by Mulhall with the help of the National Right to Work Legal Defense Fund. The case gives the Court an opportunity to end the collusion and extortion tactics used by organized labor by effectively banning neutrality agreements.

In August 2004, Mardi Gras agreed to a neutrality agreement in exchange for UNITE HERE to not picket, boycott or strike against the gaming company. The union also agreed to help Mardi Gras and spend $100,000 on a statewide ballot initiative supporting slot gambling.

Mulhall and Right to Work allege that this agreement violates Section 302 of the National Labor Relations Act. With some specific exceptions, the section prohibits employers or anyone representing them “to pay, lend, or deliver, any money or other thing of value” to any labor organization or for the official or organization to “request, demand, receive, or accept” such a payment.

The main question before the court is if the neutrality agreement is indeed a thing of value.

The union argues that because the law allows the process set forth in the neutrality agreement, including card check elections, that the agreement should be considered one of the exceptions to the law even though it is not specifically stated. The union also maintains that the law was only intended to prevent tangible gifts to the union and union officials to guard against corruption and bribery.

Still, the question must be asked: Is it better to have a union that was created organically from workers at a worksite demanding representation and one that is independent or one that was brought into a company through a deal with the boss?

Further, is it right to foster a process where a union attempts to destroy a company simply to take away the secret ballot from workers?