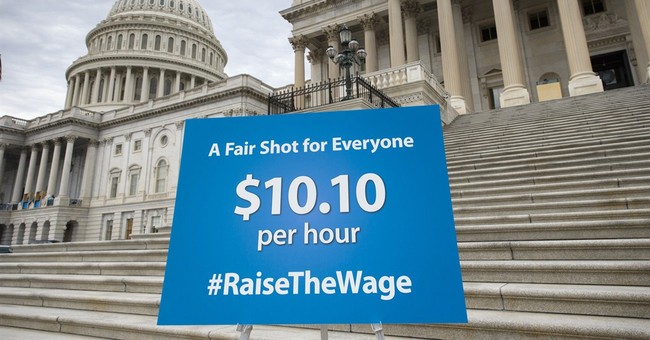 President Obama used a recent weekly address to once again call for an increase in the minimum wage up to $10.10 per hour. The President urged Congress to pass legislation making this change, and praised similar minimum wage hike efforts underway in states and localities. He criticized some in Congress for standing in the way and promised to “keep up this fight” because “our economy works best when it works for all of us – not just a fortunate few.”

Perhaps, before he again employs his lofty rhetoric in defense of this perennial liberal cause, the President should consider the evidence which suggests that such a dramatic minimum wage increase would actually damage our economy and kill American jobs. Also, he may want to think about just who stands to benefit most from a minimum wage hike – is it really “all of us”?

The Lucas Group, an executive search firm, recently released a study which found that the proposed 40 percent increase in the minimum wage would force many businesses to slow down expansion or even freeze hiring entirely. Nearly one third would have their hiring plans negatively affected in some way. Consumers would see a rise in prices as well and some businesses would even be forced to close. The service industry would be especially hard hit.

And it’s not just the Lucas Group warning of these dangers – there’s plenty more research where that came from. The Wall Street Journal reported that nearly 40 percent of businesses polled in another survey would be forced to fire employees under President Obama’s proposed minimum wage law. The Congressional Budget Office (CBO) issued a report earlier this year which noted that raising the minimum wage to $10.10 could kill up to one million jobs.

The Lucas study was focused on small- and medium-sized businesses, the engines of the American economy. It’s Main Street that’s been hurt the worst so far by the Obama Administration’s economic policies – to say nothing of the crippling effects of ObamaCare – and it’s Main Street jobs we stand to lose if the minimum wage hike goes through.

If workers and small businesses have the most to lose, who has the most to gain from a minimum wage hike? One group that’s pushing actively for the increase is a trusted ally of the President – organized labor. The American Federation of Labor and Congress of Industrial Organizations (AFL-CIO) President Richard Trumka has breathlessly praised the “sheer breadth” of wage hike efforts around the country as “breaking new ground in dynamic ways.” And no wonder he’s pleased. If minimum wages increase, Big Labor is in for a windfall.

Higher union wages mean higher union dues. And labor bosses like Trumka know how important these dues are. As union membership declines across the country, they’re grasping for every cent they can get their hands on. Of course, whenever union coffers fill, that’s good news for the sympathetic politicians they tend to support during election years – like President and certain Members of Congress pushing for the minimum wage hike.

That’s the real cycle of minimum wage economics. A higher minimum wage means a higher union wage, which means higher union dues. Businesses have to slow down hiring or lay off workers, jobs disappear, but more money pours into the pockets of Big Labor bosses. So much for the President’s desire that the economy work for “all of us.” It seems like his minimum wage increase will end up benefitting a “fortunate few” after all – politicians in Washington and their Big Labor allies.