Fred Lucas
|
Posted: Jul 23, 2018 12:01 AM
Share   Tweet
The opinions expressed by columnists are their own and do not necessarily represent the views of Townhall.com. 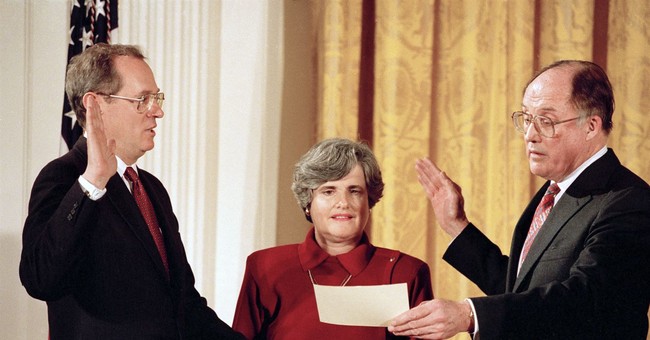 Justice Anthony Kennedy will be remembered for both a majority opinion in 2015 favoring same-sex marriage, while still recognizing in 2018 the freedom of conscience for a Colorado baker not to endorse gay marriage.

A mixed bag of bad and good rulings, Kennedy sided with Planned Parenthood in a major 1992 abortion case; but he also sided with the majority in the Citizens United free speech case in 2010.

Kennedy—who was Reagan’s third pick for the seat on the court—has left a lasting legacy. But, since his retirement, he’s rarely been cited for his role in the Bush v. Gore decision.

As I chronicled in my book, “Tainted by Suspicion: The Secret Deals and Electoral Chaos of Disputed Presidential Elections,” Kennedy played a significant role in putting the 43rd president in the White House. The book notes, “The majority opinion was unsigned, being ‘per curium’ or from the court. But it’s widely believed that Justice Anthony Kennedy wrote it.”

Whatever one’s view of George W. Bush, he is among the most consequential presidents, boldly responding to the 9/11 terrorist attack; leading to the country into the Iraq war, and leaving behind a big government Republicanism brand of No Child Left Behind education policy and the Medicare prescription drug plan.

During the 2000 case, seven justices sided with the Bush campaign’s argument that recounting selective Democratic counties in Florida violated the Fourteenth Amendment. However, four of the liberals on the court insisted Florida should be given more time to count the votes.

As “Tainted by Suspicions” recounts: “Behind the scenes, Souter worked to convince Kennedy to side with the liberals to give the state more time to tally votes under a uniform standard. If the votes couldn’t be counted in time, then the ‘Florida legislature and ultimately U.S. Congress could decide.’”

Souter publicly aired his frustration to a group of prep school students a month after the decision, asserting that if only he had “one more day—one more day” he thought he could have convinced Kennedy to be on the other side of the 5-4 split. Souter told the students, “It should be the political branch that issues political decisions.”

Souter didn’t have that extra day and George W. Bush beat Al Gore. In the book “The Accidental Presidency,” author David Kaplan claimed Kennedy was “the justice who picked the president.”

Souter might have been correct in his argument about the political branch.

When no candidate emerges with a majority of Electoral College votes, the Constitution grants the House of Representatives the power to decide the election, as the House did in 1800 and 1824. The circumstances though in 2000 were different, as it was not clear who won a specific state that would tilt the electoral majority.

Also, if the 5-4 decision had gone the other way, there is no guarantee the Florida state legislature or Congress would decide, as Souter suggested. Further, if the Republican-controlled House ultimately decided, Bush would have won anyway. Nevertheless, it would have been preferable for an elected branch to be seen picking a president than the high court.

All that said, Bush’s victory was mostly vindicated when a recount conducted by a consortium of legacy media outlets determined the Texas governor almost certainly defeated vice president.

Given Kennedy’s tendency to swing left to right, Souter might have been correct to believe an extra day would have made a difference. That leaves a great historical what-if. But, as a consequential justice heads for the exit, it’s worth remembering the role he played in a consequential presidency.