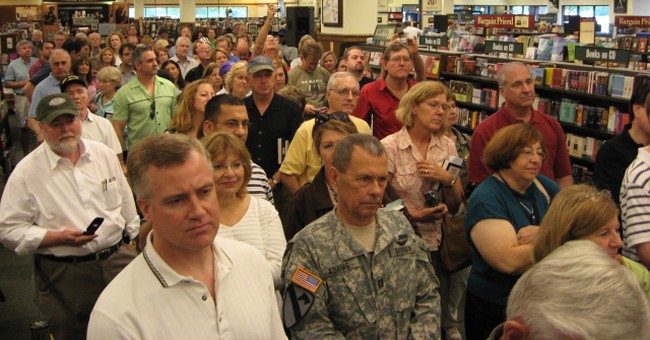 (Americans recently learned the Obama administration’s Internal Revenue Service has targeted tea party groups and other conservative organizations. The Tea Party movement, that helped sweep many constitutional conservatives into office was heavily driven by talk radio, as described in this excerpt from The Right Frequency: The Story of the Talk Radio Giants Who Shook Up the Political and Media Establishment, available for a special deal on Amazon through Memorial Day. Click here to purchase.)

During the Obama years, talk radio played a vital role in the formation of the Tea Party movement. They railed against a Democratic health care bill that eventually passed. They also were leading advocates for Republicans during the 2010 elections, which led to a new majority in the House.

“I think talk radio helped catalyze the tea party movement. It would be absolutely shortsighted and ignorant of me to think there would be no tea party if there was no talk radio because our history is full of historic populist movements,” Michael Harrison of Talkers Magazine said.

Talk radio did become more popular and influential, enough so to send much of the left into fits. Bill Clinton talked about how dangerous talk radio can be in a speech to the Center for American Progress.

“This tea party movement can be a healthy thing if they’re making us justify every penny of taxes we’ve raised and every dollar of public money we’ve spent. But when you get mad, sometimes you wind up producing exactly the reverse result of what you say you are for,” the former president said. “Before the [Oklahoma] bombing occurred, there was a sort of fever in America. …We didn’t have blog sites back then, so the instrument of carrying this forward was basically the right-wing radio talk-show hosts, and they understand early that emotion was more powerful than reason most of the time.”

While Obama eventually signed his landmark health care overhaul bill, the Patient Protection and Affordable Care Act, he did so after more than a year of debate and changes to the legislation, a 2,700 page bill that had become incredibly unpopular with the public, according polls. That is much longer than it should have taken to pass such legislation considering the massive Democratic majorities in the House and Senate.

Talk radio show hosts definitely played a role in helping to make the debate more intense. Hugh Hewitt, Mike Gallagher and Bill Bennett were all key players in the joint effort by the Salem Radio Network and the National Center for Policy Analysis (NCPA) to generate more than 1 million e-mails from 50 states to members of Congress opposing the health care overhaul. In the summer of 2009, SRN and NCPA gathered 1.3 million signatures on the “Free Our Health Care Now!” petition.

Meanwhile, Rush Limbaugh put the number of the Capitol switchboard on his website in March, with the words, Code Red: Click Here for List of Targeted Congressmen.” This led to 500,000 calls. The Chief Administrative Office, which handles technology issues for members of Congress, told The Hill newspaper there were about 40,000 calls per hour after Limbaugh’s call to action.

Laura Ingraham participated in a Capitol Hill rally opposing the health care overhaul. Mark Levin was part of a separate rally at the Capitol in opposition to the Obamacare legislation. Both Ingraham and Levin live in close proximity to Washington.

Finally, the 2010 election. Turnout was key and conservatives had all the energy. People who the mainstream media might have deemed unelectable won Republican primaries in Kentucky, Florida, and Utah after winning a special election in Massachusetts in January and turning two gubernatorial seats over to Republicans in New Jersey and Virginia.

But two hosts really emerged as superstars during— and largely because of—the Obama administration overreaching that occurred. Glenn Beck and Mark Levin had political shows running for some time, and were writing bestsellers when George W. Bush was in the White House. When Obama came into office, the Tea Party movement emerged with a focus not only on debt and deficits but also on the Constitution and American tradition, a central focus for Levin and Beck.

Beck skyrocketed to the number three spot just behind Rush and Hannity, and became a marketing powerhouse. Levin became an intellectual trailblazer for conservatism—something he had always been but more people really began to take notice faced with an ever expanding government.

Levin’s Liberty and Tyranny: A Conservative Manifesto was released in the spring of 2009, months after Obama took office. It came out just a few months after The Death of Conservatism by New York Times Book Review Editor Sam Tanenhaus, which was incidentally reviewed by the Times, and featured in other media. Levin’s book was largely ignored by the Times and the rest of the mainstream media. He didn’t get an appearance on Today or Good Morning America or Oprah. Not even on Larry King. He made it on Fox News and talk radio, but so do a lot of other conservative authors.

Still the book was a phenomenon. It sold more than 1 million copies, focusing less on contemporary politics than on history and philosophy. Books about Adam Smith, Alexis de Tocqueville, John Locke and Edmund Burke, the American Revolution, and critiques of the New Deal do not typically fly off the shelves. This one did. It remained in the number one spot on The New York Times best seller list for months on end, occasionally dropping to number two, before elevating to the top spot again the following week. It also topped the Amazon best seller list. What reviews the book did not get in the mainstream media were made up for on Amazon, where it got more than 2,000 mostly glowing customer reviews.

The book was also a favorite among tea partiers. The crux of the book was that the nation’s core values were worth fighting for against the left. He did not use the term liberal (a term going back to Locke that has a more libertarian context) or progressives. Rather he used the term “statists” to describe most Democratic politicians and a modern liberalism philosophy that seeks more power by the state and collective and less by the individual.

To back up the message of his book, he looked for conservative candidates across the United States to challenge the GOP establishment moderates. For him, it was a micro version of the epic Reagan vs. Ford battle of 1976 only in House and Senate primaries across America.

Eventually Rubio surged so far ahead of Crist, establishment Republicans who did not defect sheepishly said they would support the nominee without offering a word of encouragement. Realizing it was hopeless; Crist dropped out of the GOP primary and mounted an independent candidacy. With a credible Democrat in the race, U.S. Rep. Kendrick Meek, Rubio still captured 50 percent of the vote in an astonishing victory and embarrassing defeat for a governor who once had a bright future.

The pattern repeated itself elsewhere when Levin brought long shot candidates onto his program.

McConnell, who built the modern Republican Party in his home state of Kentucky had groomed the state’s Secretary of State Trey Grayson for an open Senate seat in 2010. Another sure thing when Levin started to plug ophthalmologist Rand Paul, who’s only political experience was campaigning for his father Representative Ron Paul. Paul won the state’s Republican primary then the Senate seat, both by wide margins. Levin also backed Mike Lee on his show in his challenge against incumbent Utah Republican Senator Bob Bennett. Lee won the nomination at the state party convention then won the race in November.

Not all were success stories for the general election. Sharon Angle in Nevada lost to Senate Majority Leader Harry Reid. Insurgent tea party candidate Joe Miller beat incumbent Senator Lisa Murkowski in the Alaska Republican primary, but Murkowski managed to keep her seat by running as an independent. There was also Christine O’Donnell—which Republicans and conservatives still debate the wisdom of. O’Donnell upset Delaware’s U.S. Representative Mike Castle—a former governor who was considered a lock for the Senate and scared most Democrats out of contesting the seat. O’Donnell was crushed by Joe Koons in November, allowing Democrats to keep the seat.

Levin argued that conservatives shouldn’t simply give up on blue states like Delaware, and can perhaps win one day if they are willing to at least compete. While Glenn Back and CNBC host Rick Santelli get most of the credit for the Tea Party movement, Levin certainly helped push it into a more cohesive electoral strategy and prove that conservatism—declared dead barely a year early—can win big.

Meanwhile, Beck’s program concentrated more than any other on American history, what the Founders might have said, and the lineage of the progressive movement of the early 20th Century to both the fascist and communist regimes that would emerge mid-century in Europe. He further drew this to the influences of the radical left in the United States such as the Students for a Democratic Society. And, lest there be any doubt, Woodrow Wilson was the worst president in American history, from Beck’s view.

Though Beck did not create the Tea Party movement, his commentary was largely credited with the proliferation of Tea Party rallies across the country. In particular, he teamed up with Freedom Works, a conservative grassroots group that helped sponsor Tea Party events.

He also started the 9/12 Project, with the idea of returning to the unity that the country experienced right after the 9/11 attacks.

The 9/12 Project revolved around nine principles and 12 values.

The Nine Principles are:

“1. America is good.
2. I believe in God and He is the Center of my Life.
3. I must always try to be a more honest person than I was yesterday.
4. The family is sacred. My spouse and I are the ultimate authority, not the government.
5. If you break the law you pay the penalty. Justice is blind and no one is above it.
6. I have a right to life, liberty and pursuit of happiness, but there is no guarantee of equal results.
7. I work hard for what I have and I will share it with who I want to. Government cannot force me to be charitable.
8. It is not un-American for me to disagree with authority or to share my personal opinion.
9. The government works for me. I do not answer to them, they answer to me.”

The Twelve Values are:

BREAKING: Another Big Win for Religious Freedom at SCOTUS

Does the Dobbs Decision Mean Birth Control or Same-Sex Marriage Are Now at Risk?