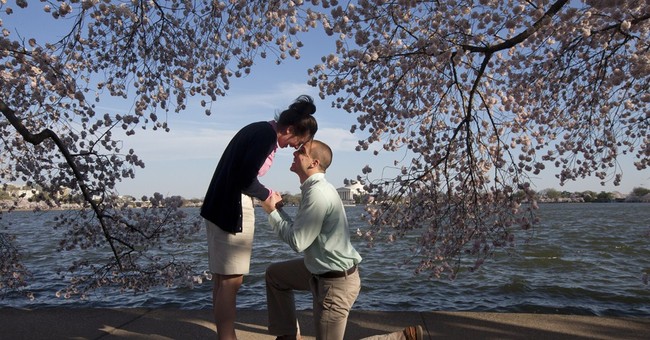 Is same-sex marriage really a “right”? If so, by what standard is it a right? Who said and by what authority?

A right is something that a person has even if the majority of people disagree with it. In other words, rights are not based on human opinion, but on an unchangeable authoritative standard beyond human opinion. That’s why human rights cannot exist unless God exists. Without God everything is simply a matter of personal preference.

Some say, “Our laws are the basis for rights!” No they are not. Human laws can only recognize God-given rights—they are not their ultimate justification. To claim otherwise would be to admit that your “rights” would vanish if a majority of humans or a dictator changed the law. No advocate of same sex marriage would agree with that. In fact, those advocates are arguing that in states where the majority is against same-sex marriage, they still have a right to it. They are correct if same sex marriage is actually a right. But since when does God consider same sex marriage a right?

Forget about the “separation of church and state” objection. It doesn’t apply here. We’re not talking about establishing a religion through our laws, but we are talking about protecting moral rights through our laws (which is what good laws are supposed to do). Our founders didn’t demand adherence to any particular religious denomination, but they recognized our moral rights come from the Creator and founded the country on “Nature’s Law” consistent with Christianity. Nature’s Law (which Jefferson said is “self-evident”) says that the natural design of the human body and the natural procreative abilities of the man and the woman serve to perpetuate and stabilize society, which same sex behavior cannot achieve. Therefore, there is a right to “natural” marriage, but no right to same sex marriage. That’s not bigotry, that’s biology.

Homosexual activists say we’re wrong. But we can’t be “wrong” unless there is a real standard of “Right” from which we deviate. So we should ask same sex marriage advocates, “What’s your standard? Who said same sex marriage is a ‘right’?” You and your friends? That’s not a right. That’s an opinion. You’re calling it a right, but you’re stealing the grounding of rights from God and then misapplying it to your own personal preferences. There is no grounding in the God of Nature’s Law for same sex marriage.

Of course, without God there is no right to natural marriage either! In other words, no matter what side of the political aisle you’re on—no matter how passionate you believe in certain causes or rights—without God they aren’t really rights at all. Human rights amount to no more than your subjective preferences. So liberals can believe in and fight for same-sex marriage, but they can’t justify it as truly being a right without reference to the Creator. If they do reference the Creator, then they have the rationally dubious task of arguing that God affirms same-sex marriage.

“But what about equality?” they say. Absent God, they have no grounding for “equality” either. What objective standard justifies “equality” or anything else as a right if there is no God?

While homosexual activists are correct that equal treatment under the law is a right, they steal that right from God and then misapply it. Instead of applying equal treatment to people, they misapply “equality” to behaviors. They are correct that all people should be treated equally, but incorrect to imply that all behaviors should be treated equally. It would be foolish to treat all behaviors equally. In fact, the very reason laws exist at all is because all behaviors are not equal and must be treated differently for the benefit of individuals and society.

Since same sex marriage and natural marriage are different behaviors with different outcomes, they should be treated differently. One behavior perpetuates and stabilizes society, and the other doesn’t. Promoting one behavior does not deny rights to people who don’t engage in that behavior.

In fact, what is often missed in this debate is that all people—whether they have homosexual or heterosexual desires—are equal and already have equal rights under the law. Every human being has the same right to marry someone of the opposite sex. Homosexual activists want the additional right to marry someone of the same sex, but even they limit the definition of marriage. Most homosexual activists want to limit the definition of marriage in such a way so groups cannot marry. Why are they so “bigoted” to rule out groups and other arrangements they disapprove of? The same logic that seeks to justify same sex marriage—“I should be able to marry whomever I love”—can be used to justify any preferred arrangement.

The truth is, everyone puts limits on marriage. If marriage had no limits it wouldn’t mean anything. But unlike liberals, conservatives have more than a mere preference for their limits. The long-held view that marriage is limited to one man and one woman is rooted in Nature’s Law in accord with the facts of nature. Again, that’s not bigotry—that’s biology.

When we ignore biology and steal rights from God, we inflict very negative long-term consequences on society, and especially on children. That’s what we’ll cover in tomorrow’s column.