Hail to the Chiefs 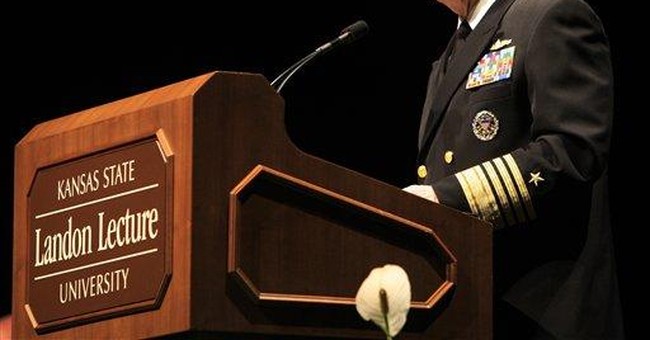 Last week was not a good one for proponents of social re-engineering of the U.S. military. They had been buoyed by the previous week's congressional testimony of Secretary of Defense Robert Gates and Joint Chiefs Chairman Admiral Mike Mullen, widely seen as evidence the Pentagon was prepared to accede to President Obama's demand that avowed homosexuals be allowed to serve in the armed forces. Now, however, four other members of the Joint Chiefs of Staff have weighed in, and all bets are off on the idea of experimenting with - and possibly breaking - the All-Volunteer Force.

The first official efforts to protect the military's culture from the destructive agenda espoused by lesbian-gay-bisexual-transsexual (LGBT) activists were mounted on Tuesday by the leaders of the air and ground services. Air Force Chief of Staff General Norton Schwartz told the House Armed Services Committee: "This is not the time to perturb the force that is, at the moment, stretched by demands in Iraq and Afghanistan and elsewhere without careful deliberation."

The same day, the counterpart Senate panel heard from the Army's top general, Chief of Staff George Casey, who said that he has "serious concerns about the impact of repeal of the law on a force that's fully engaged in two wars and has been at war for eight-and-a-half years." Gen. Casey added, "We just don't know the impacts on readiness and military effectiveness."

Then, on Wednesday, Chief of Naval Operations Admiral Gary Roughead rolled in, warning the House Armed Services Committee that "There has never really been an assessment of the force that serves....Equally important [are] the feelings of the families that support that force." With that marker down, the Nation's top naval officer made clear that he is not going to go along with an idea his subordinates reject.

The LGBT crowd tried to portray the admiral's proviso as evidence of his support for the Gates-Mullen approach that I call "Gitmo 2"-- decide first to repeal the present law barring open homosexuals from serving, then sort out the implications of doing so. Adm. Roughead and his colleagues, however, seem to have no appetite for the sort of survey that favored by the would-be Pentagon social engineers: In the words of Wonderland's Queen of Hearts, "verdict first, trial after."

At a House Armed Services Personnel Subcommittee hearing on Wednesday, one of the homosexual advocates, Rep. Susan Davis, will nonetheless rig the survey and the study of which it will be a part. Specifically, she reportedly hopes to preclude, as the LGBT lobby's Palm Center put it after the Roughead hearing, "anecdotes about the personal preferences of enlisted personnel and junior officers," claiming speciously that such opinions "would not constitute evidence about the critical question of what impact lifting the ban will have cohesion, recruitment, and effectiveness."

It appears the Chiefs know better, and will insist on getting such insights from the troops. They will also hear from American families who send their loved ones to serve in the military - and may elect not to do so if the military culture is supplanted by the homosexual agenda.

Matters got worse for the latter's proponents with testimony on Thursday from the Commandant of the Marine Corps. General James Conway declared flatly, "I think the current policy works....At this point...my best military advice to this committee, to the [Defense] Secretary, and to the President would be to keep the law such as it is." Semper fidelis.

The Chiefs also expressed strong opposition to an insidious gambit being promoted by the Michigan Democrat who chairs the Senate Armed Services Committee, Sen. Carl Levin. The chairman's stratagem is to get the Pentagon simply to stop enforcing the law of the land, essentially rendering moot the question a working group there is supposed to be studying: How harmful will repeal of that state be on the readiness and effectiveness of the military? Fortunately, those with direct responsibility for the good order and discipline of the armed forces have said of such a moratorium: Fuggedaboutit.

The battle lines are now drawn. The imposition of the homosexual agenda on the only military we have has gone from being a putative certitude to something that will only happen over the adamant objections of the leaders of each of the Defense Department's four armed services.

Add into the mix over 1150 retired flag and general officers who have written a powerful open letter that concluded: "Our past experience as military leaders leads us to be greatly concerned about the impact of repeal [of the law] on morale, discipline, unit cohesion, and overall military readiness. We believe that imposing this burden on our men and women in uniform would undermine recruiting and retention, impact leadership at all levels, have adverse effects on the willingness of parents who lend their sons and daughters to military service, and eventually break the All-Volunteer Force."

President Obama's effort to repeal what he misleadingly calls "Don't Ask, Don't Tell" (which was actually the Clinton-era Pentagon directive, not the statute in question) has foisted upon his allies on Capitol Hill yet another, potentially crushing political liability. Already-skittish Democrats who want to continue to represent districts that respect the military, and what it does for all of us, simply can no longer afford to follow Mr. Obama's lead. Hence, the stage is set for the President to be repudiated in favor of the best, informed advice from the leaders of the four armed services. Suffice it to say, hail to the Chiefs!