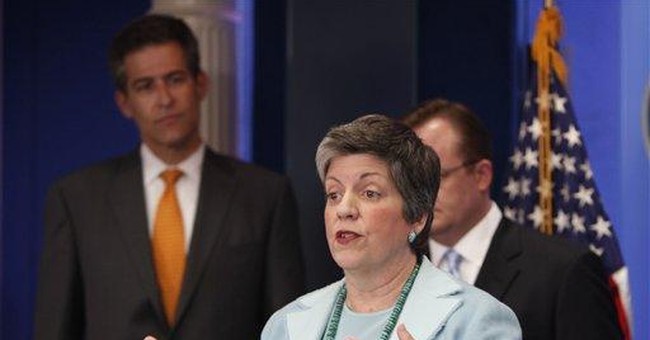 Give Janet Napolitano her due. The Secretary of the Department of Homeland Security has taken to heart Barack Obama’s campaign pledges of “change” and “hope.” Unfortunately, the changes she has effected seem generally to be to dismantle sensible Bush-era internal security policies and practices, replacing them with politically correct nostrums and generally inadequate programs.

The cumulative effect of such change can only be to give hope to our terrorist foes. If this keeps up, Ms. Napolitano’s post should be renamed the Homeland Insecurity Department. Consider the following illustrative examples:

Secretary Napolitano has been at the cutting edge of the Obama administration’s efforts to define away the conflict in which we are engaged. Her most notable contribution has been to replace the term “terrorism” with “man-caused disasters.” She claims it reflects her desire to “move away from the politics of fear toward a policy of being prepared for all risks that can occur.” Sadly, such gambits predictably have the effect of further confusing the public about the gravity – let alone the source – of the dangers that her department was established to counter.

Speaking of dangers, a report recently released by Ms. Napolitano’s staff warned of the threat posed by veterans returning from Iraq and Afghanistan and other “right-wing extremists.” This defamation is all the more egregious for its coming on the heels of a no-less-benighted Bush administration lexicological exercise – one that concealed the role of what authoritative Islam calls “Shariah” in spawning terrorism.

Then, there is the problem posed for homeland security by untold numbers of individuals illegally in the United States. A few months ago, Secretary Napolitano suspended workplace raids aimed at apprehending employees not legally here. Her department then freed and gave work permits to twenty-seven of those previously arrested on her watch. While she authorized resumption of the raids last week, their principal target reportedly will be American employers, rather than the illegals they hire. It is not clear whether the net effect of the Napolitano program will be to discourage or incentivize aliens to try to penetrate our borders.

Here’s another straw in that wind: The Obama administration has submitted a budget to Congress that would deny state and local governments currently incarcerating illegal immigrants the federal help they have heretofore received to defray the associated costs. If allowed to stand, the inevitable result would be to release into the general population thousands of possibly dangerous aliens, compounding our homeland insecurity problem.

There is another group of dangerous aliens Mr. Obama seems determined to unleash on the American people: Ms. Napolitano’s organization may have to cope in the near future with seventeen Chinese Uigars trained in terrorism in Afghanistan. They have been held in recent years at Guantanamo Bay and reportedly are slated for release in Alexandria, Virginia. In addition, although legislators of both parties are increasingly voicing objections, the President’s decision to close “Gitmo” without a plan for its detainees seems likely, all other things being equal, to result in many of them coming to penitentiaries here – at who knows what risk to the American people?

If Ms. Napolitano has her way, the Uigars will be able to get Virginia drivers licenses – like thirteen of the twenty-one September 11th terrorists – as she says she intends to “repeal the Real ID Act.” That statute, which requires (among other things) that the 50 states meet a high standard for issuing drivers licenses, was belatedly adopted on the recommendation of the 9/11 Commission. The Commissioners emphasized that fraudulently obtained identity documents are “weapons” in the hands of our enemies.

The Secretary’s helpmate in repealing the Real ID Act is Hawaii Democratic Senator Daniel Akaka. He is expected shortly to introduce a substitute dubbed the “Pass ID” Act. That title is certainly appropriate insofar as the draft bill would seemingly allow virtually anyone – including Gitmo detainees, illegal aliens, employees of international organizations and a class called “other non-immigrant aliens who are authorized to remain in the United States for an indefinite period” – to be eligible for temporary driver’s licenses or other IDs.

Outright repeal of the Real ID Act, however, would also eliminate several other provisions of law that closed loopholes exploited in the past by various terrorists like the Blind Sheik, who was responsible for the first attack on the World Trade Center in 1993, and by several of the 9/11 attackers. These include important restrictions on who can be granted asylum. Consequently, Congress seems unlikely to go along with a wholesale gutting of the Act.

Still, Secretary Napolitano seems to want political cover for eviscerating the statute’s eminently sensible and much-needed requirements with respect to driver’s licenses. Even though more than 30 states are moving to satisfy those requirements and even though she has the authority to give the remaining states additional time to do so, the former Governor of Arizona apparently is okay with once again giving terrorists a “pass” to gain access to our airplanes, government facilities, banks, etc.

Like much of the rest of the Obama administration’s agenda with respect to our security, that related to safeguarding our homeland appears increasingly to be a wrecking operation. Janet Napolitano’s Homeland Security Department requires urgent adult supervision. Let us pray that it receives such oversight and course corrections from the Congress – notably its rejection of any repeal of the Real ID Act – before someone exploits the vulnerabilities she is needlessly recreating.